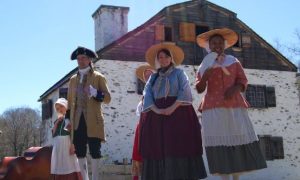 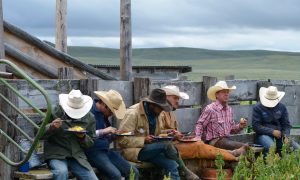 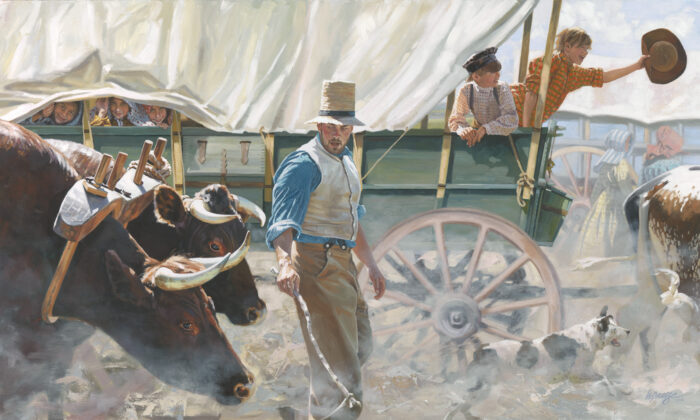 Pioneers travel in the wagon train on the westward trail in the 1840s. "Westward Ho!" 2016, by Heide Presse. Oil on linen panel; 24 inches by 42 inches. (Courtesy of Heide Presse)
Fine Arts & Craftsmanship

Artist Heide Presse paints mid-19th-century American life as authentically as she can. Farmers, homesteaders, and pioneers are a few of the folk who are captured on canvas, taken from firsthand historical accounts. In her paintings, women read Bibles, sew quilts, or tend children; and men work the land, herd cattle, and drive wagons.

Presse’s paintings are full of color, playful light, and sometimes dust, as America’s past comes to life through her canvas.

She starts painting only after an often lengthy process of research that enables her to depict a real-life event or scene as true to the past as possible, Presse explained by phone. Through years of research, she has built up not only a fine knowledge of the time but also a collection of period needlework that she makes and uses as props in her paintings.

Today, Presse is an acclaimed artist nationally, with a busy schedule of gallery and museum exhibitions including “Quest for the West” at the Eiteljorg Museum in Indianapolis and “Buffalo Bill Art Show and Sale” at the Buffalo Bill Center of the West in Cody, Wyoming, among others. Between these commitments, she’s been working on a personal project—to paint the lives of the people who opened up the West in the early years of the westward trail movement, the late 1840s and early 1850s. She believes these trailblazers were the ones who took the most risk.

Here, she shares that project and how she paints “living history” while staying true to America’s past.

The Epoch Times: How did you begin to paint history paintings?
Heide Presse: I always had an interest in history. If you look back at my older work, you can see a thread of it. But I didn’t get really serious about it until the early 2000s, when I was asked to contribute paintings for a corporate commission, which had to feature historic situations in Virginia. I had to create paintings dating from George Washington’s time all the way through to the Civil War.

I would go to historical reenactments and living history museums, and I would just paint subjects that interested me. At the time, I didn’t have a thorough understanding of the details of period clothing.

I started to really dive into this historical world and learned how to conduct research for the corporate commission; I realized that I had to learn this all myself. I couldn’t trust other people to be accurate with their period clothing. I learned that if I wanted my paintings to be right, then I needed to understand what was right. So I started what was to be about a 10-year journey, finding my own historical reenactor sources.

I had some wonderful people who took me under their wing because they liked what I was trying to do with my art: people who have degrees in historic costuming, museum curators, and really good historical reenactors, for example. They helped me learn a great deal. I learned how to do period sewing and how to study original clothing like bonnets from them, for example.

I like sewing, so it was not a hardship for me; it was actually quite enjoyable. I have made my own bonnet patterns after studying original bonnets, but I mostly use patterns drafted by historic costumers. I’ve sewn a variety of garments, and I also purchase accurate reproductions, so that I have enough clothing to dress people at my home studio when I need to.

I am not an expert in any of this by any means, but I learned enough.

When I was first starting to learn the history, I actually had clothing made for myself and went to a very good living history event on a historic farm in the Shenandoah Valley. Because I wanted to understand how to dress women, I needed to do it myself. And that was a good thing because I understand what it feels like to wear the clothes, and it just gave me a good understanding and grounding.

But my best-case scenario and what I seek out first when I’m planning a painting is to photograph historic interpreters who know what they’re doing. And they have the period clothing, and it’s lived in, and they look like history.

The Epoch Times: Part of researching your paintings involves reading 19th-century journals. How do these influence your paintings?
Mrs. Presse: When I was working on the corporate commission pieces, I was always going to historic sites or doing research and visiting museums to get references for those paintings. Every time I would go to those places, I would always explore the bookstore, and I started picking up books that contained journals.

I love reading journals because if I am trying to get into the heads of people I want to depict in my painting, I feel the best way to do it is to read their own words. It’s the best way for me to put myself into their shoes, so to speak. And also, when I went through this process of learning how to research, of course, one of the first things I learned is to find primary documentation first, so I was always looking for that sort of thing.

One time, I picked up this book that contained journals written mostly by women as they traveled the trails west, and I was just hooked. I started reading all these journals. And for the first time, it gave me an understanding of getting into the wagon and spending several months relocating. Before, I had this kind of romanticized image in my mind, and I didn’t really think that much about it. But the situation was far more complex, as you can imagine. So that led me to where I am today.

The Epoch Times: Please tell us about your current project “We Set Our Faces Westward…One Woman’s Journey 1839–1848.”
Mrs. Presse: Since that first book that I picked up that contained several journals, I’ve read a lot of journals and, of course, I get ideas for paintings.

But there was this one particular journal (it’s not a very long journal, really), but the woman who wrote it, Keturah Belknap, was just incredibly descriptive. Most journals from the Oregon Trail or California Trail, talk about how many miles they traveled, if they had good water, good grass, and they talked about landmarks along the way. They all traveled the same routes, so if you read many of these trail journals, they can be a bit redundant.

But Belknap’s journal just stood out because she talked about how she did things, everyday things, and that’s what fascinates me. In 1840, she wrote:

“Now it is spring and we have got a few sheep on the shares and they are sheared. All this winter I have been spinning flax and tow to make some summer clothes. I have not spent an idle minute.

“Now the wool must be taken from the sheep’s bag, washed, picked, and sent to the carding machine and made into rolls. Then it must be spun, colored, and wove to have it ready for next winter.”

So I started to get this vision of doing a series of paintings depicting the life of one person who went through this process.

Belknap and her husband were newlyweds in their early 20s, who went from Ohio to Iowa to homestead in 1839. Half of my project covers the time that they homesteaded in Iowa from 1839 to 1847, so I am basically painting a picture of everyday life during that period. Then the other half of the project is their journey from Iowa to Oregon in the covered wagon. Belknap and her immediate family went to Oregon from Iowa in 1848.

In 1847, when the gold rush began in California, the gold rush stories started to hit the publications in the Northeast and everywhere, and people started migrating to the West. And that started a big change for this country.

I think so many people kept journals during the trip because they knew they were making history.

Belknap just resonated with me. I was just fascinated by her feistiness and everything she went through, and the way she described in such detail how she did every little thing. She also had a very deep Christian faith and spoke of it frequently. It’s also a huge presence in many of the journals that I read, because those people generally had a really deep faith.

The only thing Belknap didn’t really talk about is that she happened to be pregnant and gave birth on the trail. It’s interesting that they never talked about really personal things like being pregnant. You never find out that they were pregnant on the whole trip until the baby is born. But that’s the way it was.

Having decided to create a large collection of art based on Belknap’s journal, the first thing I had to do was to find a young woman who was going to be my model. I attended a conference in Pennsylvania to learn about mid-1800s culture and clothing and spoke to a young woman who I’d first met at the Shenandoah Valley event. She’s an outstanding living history interpreter and a very talented dressmaker.

So I talked to her and I thought, “How in the world am I realistically going to do this living in Florida?” Once I sat down and had the conversation with her, it was like God just poured all these opportunities into my lap to get this done. It was amazing. Because at that time she happened to work for Genesee Country Village and Museum, which is a wonderful living history museum in New York state with a village of 68 historic structures. She opened the doors to almost everything I needed as reference for my work, including introducing me to other talented historical interpreters who also pose for me.

One of the most lucky finds was someone to pose as her husband, the man in the story. At the time, I really did not know much about men’s impressions or have much knowledge of agriculture in that period. She introduced me to a young fellow who worked in the agriculture program at this living history museum where they have heritage breed animals, including the shorthorn Milking Devon oxen. There, they plow the land, grow and harvest crops, and all in the period manner.

For about three years, I would visit the museum a couple of times a year and spend several days there. So that just parlayed into the most perfect situation for me. That’s where I got a lot of my reference material.

I’m just always astounded at how lucky I am. I’m so grateful that these talented individuals who devote so much of their lives to living history have agreed to work with me. Because the painting is only going to be as good as the subject, I have to have a good reference. And I need to understand what I’m painting.

This article has been edited for clarity and brevity.

The transcription of the Keturah Belknap diary comes from the Manuscripts, Archives, and Special Collections at the Washington State University Libraries in Pullman, Wash.

To find out more about Heide Presse’s work, visit HeidePresse.com