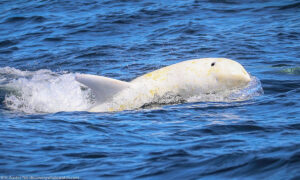 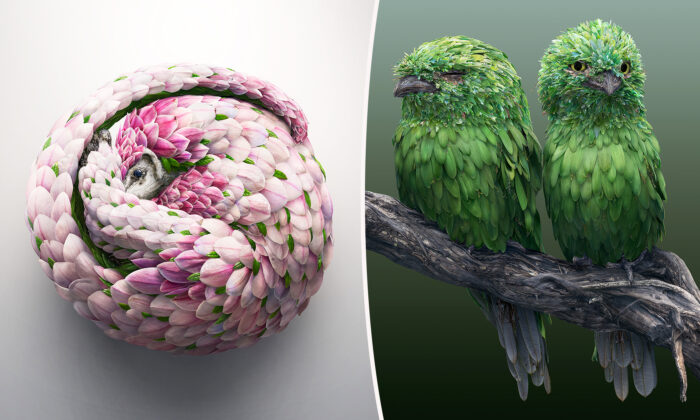 Photographic illustrator Josh Dykgraaf is completely reimagining wildlife photography by digitally combining animals and landscapes—fused together as one—to create something spectacular and unique.

Inspired by objects and scenery found in nature, as well as animal photography, his digital series “Terraform” invites viewers to contemplate some of the wondrous patterns in nature which, when combined, resonate with both contrast and harmony.

“I was surfing through some images I’d shot on a totally different project and had the observation that some rock formations in the Swiss Alps looked like the skin of an elephant,” Dykgraaf, of Melbourne, Australia, told My Modern Met of the project’s inception.

The image of the Alps, joined with the similarly colossal, majestic beast, became his first hybrid piece, titled “Ourea.”

Dykgraaf, who has been freelancing as an artist for almost a decade, didn’t stop there. Noticing how certain leaves resemble bird feathers and some flower petals, scales, he delved deeper into his exploration and expanded his project.

Each production is a labor of love. With a small lighting setup, he photographs leaf and flower collages from multiple angles before layering up to 3,000 images in Photoshop. The process of completing one picture takes anywhere from 30 to 60 hours.

“Technically, I work with the idea that ‘any sufficiently advanced technology is indistinguishable from magic,’” he shared in an interview with Design Boom.

In one of his works, a coiled pangolin with its coarse, hardened scales—created entirely out of delicate magnolia petals—sets off a stunning contrast; in another, a pair of tawny frogmouth birds are comprised of countless tiny layered leaves in a clever composition; in yet another, a frilled lizard’s scales betray a striking resemblance with protea flower blossoms.

The magnolias, found blooming along a street near his home, had just the vibe and color palette in his conception. During the 2020 lockdown, he focused entirely on natural objects and materials that could be sourced close to home, assembling his creations in a makeshift kitchen studio that he set up.

Dykgaard’s true passion, he says, is creating art that causes an impact on people. “All the effort is worth it when I see someone double-take at my work,” he explains on his website. “The buzz I get from that moment can keep me going for days.”

Beyond the substantial achievement of the Terraform series, Dykgaard also uses his platform as a forum for the discussion surrounding threats to wildlife.

“As the project has gone on, I’ve moved on to working on other issues that I care about,” he explained. “The devastation we experienced here in Australia with the bushfires last year killed some three billion animals and are projected to push koalas to extinction in the wild in the coming decades.”

The tragedy from the bushfires motivated Dykgaard to travel to the sites of the fires and create a series based on the raw materials he found there. More works derived from these sources are in the pipeline, he says.