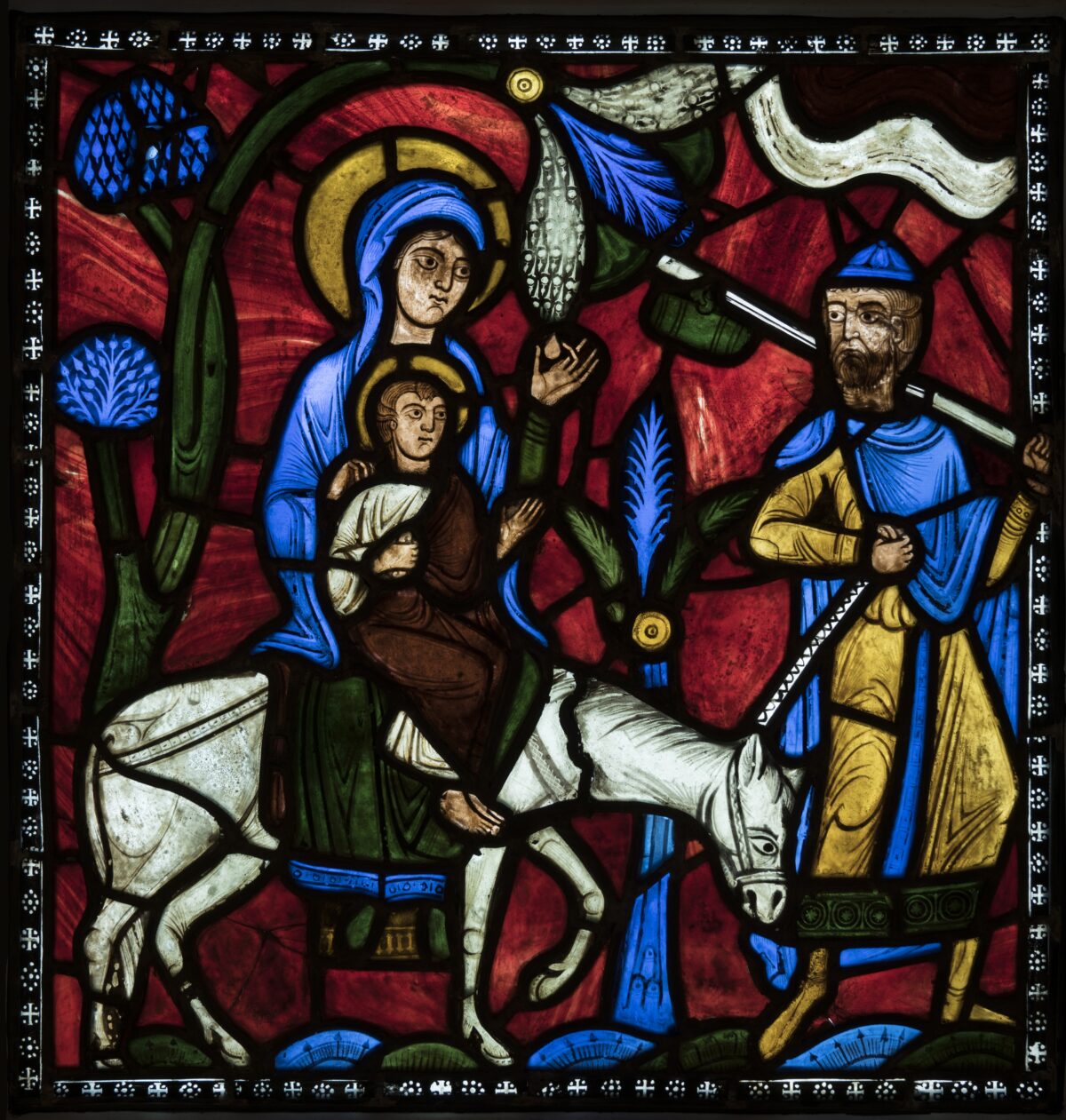 "The Flight into Egypt," believed to be from the "Infancy of Christ Stained-Glass Window," circa 1145, by anonymous. Stained glass; 20 1/2 inches by 19 3/4 inches, from the Basilica of St. Denis, Paris. On loan from The Glencairn Museum, Bryn Athyn, Philadelphia. (Courtesy of Philadelphia Museum of Art)
Arts & Tradition

Art Worth Visiting: 3 US Summer Exhibitions

Across the country, there are some great summer exhibitions that highlight fine European art and craftsmanship, from rare French medieval architecture and stained glass in Philadelphia, to remarkably colorful ancient Greek and Roman sculpture in New York, to Renaissance prints from Germany, Switzerland, and the Netherlands at the advent of printing, in Washington, D.C.

Bringing Color Back to Ancient Sculpture

Vibrant, colorful replicas of ancient Greek and Roman sculptures will soon arrive in New York and will be on display alongside similar original masterpieces. It’s surprising, almost jarring, to see these ancient works depicting gods, goddesses, important personalities, and mythological creatures painted in lively colors with flesh-toned paint, colorful clothes (often in striking patterns), and sometimes with touches of gold. But this is how ancient sculpture used to be.

For centuries, the pure white marble statue has been the quintessential image of ancient sculpture. The idea of the uncolored ancient sculpture began during the Italian Renaissance (in the 16th century to be exact), when the sculptures fit into the ideal of art that artists were looking for, Vinzenz Brinkmann explains in a video.

Brinkmann is the head of the department of antiquity at the Liebieghaus Sculpture Collection in Frankfurt am Main, Germany, where for 40 years his team has been researching ancient artists’ use of color.

He explained that, in the 18th century, when archaeologists began excavating ancient sites in Rome and then in Greece, they unearthed artifacts with traces of paint. But the myth of uncolored ancient art continued. Even in the 20th century, when researchers used science to confirm that color was used on ancient statues, the idea of colorless ancient sculpture still reigned.

Brinkmann and his team began looking at the ancient sculpture under the microscope with their naked eyes, then they used technology such as ultraviolet light, and then infrared luminescence photography to discover finer details. The Metropolitan Museum of Art will present this research in its “Chroma: Ancient Sculpture in Color” exhibition. On display will be 14 of the German team’s reconstructions of Greek and Roman sculpture alongside similar works from The Met’s collection.

The Met’s departments of Greek and Roman art worked with Brinkmann and his team to reconstruct, in color, the museum’s Archaic-period Sphinx finial (a decorative ornament to highlight a structure), which once crowned a grave stele (stone funeral monument) also in the museum’s collection.

American lawyer and businessman Raymond Pitcairn must have seen many great works of art and architecture in his lifetime. He shared his mother’s love for European art and, from the age of 3, traveled to Europe almost every year until he was married.

Pitcairn (1885–1966) went on to become a notable collector of medieval art and architecture. It was an era of art he loved above all others. “Of all the works of art created by the hands of men, there are none that seem to live, through the human spirit that breathes within their every part, as do the marvelous churches and cathedrals of the Middle Ages,” he wrote in 1920.

Pitcairn focused on collecting exemplary pieces of Gothic and Romanesque monumental sculptures and stained glass in particular, especially French pieces from 1100 to 1300.

He collected art for the sheer love of it, but he also oversaw the construction of the Gothic and Romanesque-style Bryn Athyn Cathedral (1917–1928) in Pennsylvania (which was funded by his father, the industrialist John Pitcairn), and he wanted to find the best art to copy.

Artists and artisans worked in the traditional manner for the cathedral’s construction, in onsite workshops dedicated to stone, wood, metal, and stained glass.

Art lovers wanting to see Pitcairn’s collection can normally do so at the Glencairn Museum in Bryn Athyn, just north of Philadelphia, in the mansion home where he lived with his wife for 40 years. But currently, the museum is undergoing refurbishment.

Luckily, visitors to the Philadelphia Museum of Art can see some of Pitcairn’s most celebrated works in its exhibition “Medieval Treasures From the Glencairn Museum.” Included in the exhibition, for example, is the best-preserved piece of Early Gothic glass in America: the stained-glass “The Flight into Egypt” panel from the Basilica of St. Denis, in Paris. (The St. Denis choir is the first complete example of Gothic architecture.)

Exhibition visitors can also see exceptional architectural sculpture, such as a capital (the broad, top part of a column) from St. Guilhem-le-Désert in Hérault, southern France.

Visitors to the National Gallery of Art (NGA) in Washington will soon be able to see an early engraving by German artist Albrecht Dürer, titled “Saint Jerome Penitent in the Wilderness.”

In the engraving, Dürer showed Jerome paying penance in his desert hermitage, far from the temptations of Rome. He solemnly gazes at a crudely made cross sticking out of a crag, as he holds the rock he uses to beat against his chest.

Dürer so deftly rendered Jerome’s remorseful facial expression that it’s hard not to be moved. The lion Jerome tamed, by pulling a thorn from its paw, is sitting by his side.

Dürer had recently returned from Venice, Italy, when he created this image, which was a popular subject in Italy but not so in Germany. The work is one of some 30 prints by Renaissance artists working in Germany, Switzerland, and the Netherlands that will be in the gallery’s new exhibition: “The Renaissance in the North: New Prints and Perspectives.”

All the exhibition works are new NGA acquisitions that together show how art and ideas spread across Europe in the late-15th and 16th centuries through the new medium of printing. On display are woodcuts, etchings, and engravings for portraits, public decoration, and private devotion.

“The Renaissance in the North: New Prints and Perspectives” exhibition runs July 3–Nov. 27, 2022. To find out more, visit NGA.gov