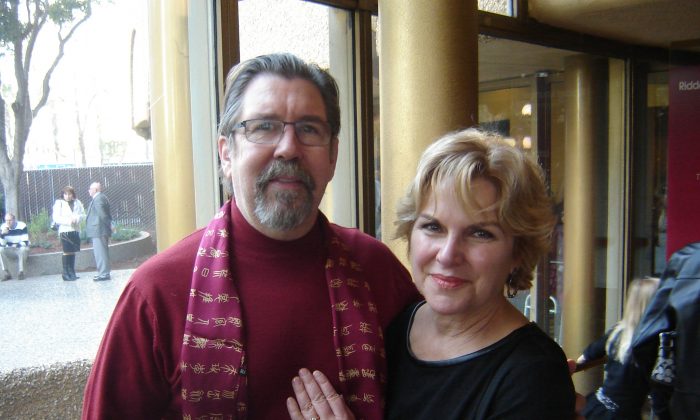 SAN JOSE, Calif.—College art teacher Eve Mathias was moved to tears when she saw Shen Yun Performing Arts with her husband in San Jose on Jan. 3.

“It was beautiful. Everything, the staging … the set, and the light, and everything,” Ms. Mathias said. “I teach art, and I look at space and color.”

She said she was glad they decided to attend Shen Yun, a New York-based company that aims to bring traditional Chinese culture to life through classical Chinese dance and music.

“The colors are fantastic, the music is wonderful,” said her husband, financial planner John Mathias.

“It was beautiful. Everything, the staging … the set, and the light, and everything”
— Ms. Mathias

Ms. Mathias was impressed with Shen Yun’s digital backdrop. As Shen Yun’s website explains, “With state-of-the-art graphics technology, Shen Yun’s digital-backdrop team creates vividly animated settings, extending the stage and transporting the audience to a world where heaven and earth are one.”

“The projections are probably the best I’ve ever seen,” Mr. Mathias agreed. They both admired the way the dancers interact with the backdrop, sometimes seeming to disappear into it.

Through stunning choreography, many Shen Yun dance pieces tell ancient legends and modern-day heroic tales. Ms. Mathias was particularly touched by The Power of Compassion, a dance that tells of compassion in the face of oppression.

The dance depicts a tragedy that is ongoing in today’s China—the persecution of the Falun Gong meditation discipline, which is rooted in traditional Chinese culture. The story brought tears to Ms. Mathias’s eyes.

“It was so beautiful,” she said, adding that she and her husband believe in and practice compassion in their lives.

“I’ve been to Hong Kong and to the mainland, as well as Taiwan, so I love Chinese culture,” Ms. Mathias said.

One story-dance that stood out, “was the magic brush,” her husband said, referring to The Fable of the Magic Brush, a legend about a silver dragon maiden’s paintbrush that can make anything it paints come to life.

Mr. Mathias appreciated the way goodness wins over evil in the fable. “I think that right always conquers wrong, and the images were just so wonderful,” he said.