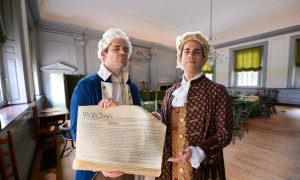 How Much Do You Know About American History?
0
Share Now
TelegramFacebookTweetEmailTellMeWeReddit
Copy Link 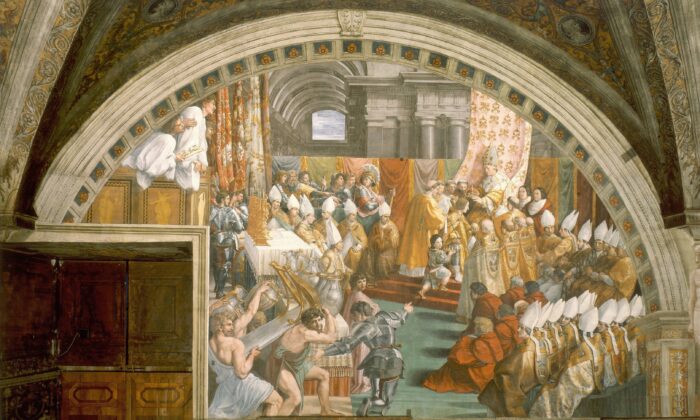 "The Coronation of Charlemagne" by Raphael. During the Middle Ages, Charlemagne, as well as others such as Alfred the Great, were looked to as heroes. (Public domain)
Arts & Culture

Are We Making Heroes of Our Villains?

“I am human, and I think nothing human is alien to me.”
—Terence, Roman playwright

Nothing human is alien to me?

What do we think about that statement? True or false? How might our culture reflect Terence’s famous line?

To examine these questions, let’s shine a light on our contemporary concepts of heroes and villains.

Throughout history, human beings have looked to heroes, mythical and real, as models for emulation. The ancients took fictional figures like Achilles, Hercules, and Aeneas and used them as ideals of comparison for their own deeds. For living models of virtue, they turned to philosophers like Socrates, warriors like Alexander the Great, and rulers like Solon and Cincinnatus. The Middle Ages admired Arthur and his knights of the Round Table, El Cid, Beowulf, Charlemagne, Alfred the Great, Thomas Becket, and a bevy of knights and saints.

In our modern age, we too have created such mythological heroes: Superman, Batman, Wonder Woman, Spider-Man, the Avengers, and others. Superman’s slogan, “Truth, Justice, and the American Way,” may have grown worn and hoary with age, but we still like to see our superheroes as the good guys, as men and women we could take as models for our own lives.

Some movies also feature realistic heroes. Mel Gibson’s “Braveheart,” “The Patriot,” and “Hacksaw Ridge” give us central characters who are heroic in ways that earlier generations would have understood. In “To Kill A Mockingbird,” Atticus Finch is presented as a man without flaws, a hero both to his children and to the good people of his town.

Unlike previous generations, we seem in short supply of real-life heroes these days. Figures from American history who once inspired young people—Washington, Lee, Clara Barton, Edison, Amelia Earhart, and so many more—either fail to meet our politically correct standards or are simply left out of our classrooms and schoolbooks. Other than a few entertainers and sports figures, famous living Americans also rarely win universal acclaim.

With the rise of antiheroes—a protagonist who conspicuously lacks traditional heroic qualities—the distinction between heroes and villains in literature and film has become less obvious. The novels of Lee Child, for example, feature Jack Reacher, an ex-military policeman who helps those in trouble but who also leaves behind a platoon of corpses. James Lee Burke’s fictional Dave Robicheaux, a Louisiana private detective, kills fewer people, but his sidekick, Clete Purcell, has no problem acting outside of the law when he believes the occasion demands instant justice.

In film, antiheroes run the gamut from Clint Eastwood’s ex-outlaw and killer William Munny in “Unforgiven” to Michael Douglas’s enraged white man in “Falling Down.” On television, we see this same ambiguity of character in such shows as “Breaking Bad” and “Mad Men.”

Which leads us next to the bad guys.

Do we still recognize villains? Or is the line between villainy and heroism becoming blurred?

Americans once believed that such was the case. In the 1930s, various moviegoers became concerned that Hollywood was portraying gangsters as heroes. These protesters feared young people might watch these films and attempt to copycat the actors. As a result, the Hays Code was put into place, a Hollywood production code that sought to curtail violence, sex, and the glamorization of gangsters in the movies. Hollywood responded by continuing to make films about gangsters, but now the good guys—the police, the FBI—were the heroes.

In our own time, we occasionally take villains from myth and fairy tales, and give them a more humane face. In “Grendel,” for example, a best-selling novel of the 1970s, John Gardner presents the monster that devoured men and fought Beowulf as a sympathetic character. Films like “Maleficent” and the gory “Joker” turn myth and fairy tale upside down, again, like Gardner, allowing evil to make its case, to appear tragic, and so attract our understanding.

In the November issue of “Chronicles Magazine,” film critic George McCartney recognizes the danger of these topsy-turvy portrayals, writing of “Joker,” “There’s something desperately wrong with comic book films that insist on portraying their super heroes and villains as if they were real people. It not only strains our willingness to suspend our disbelief, but also encourages young viewers to venerate these freaks.” In other words, we give our young people villains as models of emulation.

We see this trend in movies that don’t feature superheroes. If we travel all the way back to 1972 and look at one of my favorite all-time movies, “The Godfather,” we find Marlon Brando as Don Corleone, a mobster who has committed murder and makes his living by intimidation and force. Yet the Don wins the admiration of many viewers for his devotion to his family and his sense of integrity in his “business.” He becomes a sort of hero.

So now a question: What are we to make of villains becoming antiheroes, or even worse, heroes, in our culture?

A Canyon That Needs No Bridge

We can understand evil at an intellectual level. I can read, for instance, about a mass murderer who is either insane or ideologically corrupt, and understand on that level his motives for shooting people. I can grasp his motivations.

But inside my heart, that shooter appalls me. His murder of innocent people—men, women, and children—is abhorrent and sickening.

There is a canyon of difference between understanding and acceptance.

If we have arrived at the point where we build a bridge across that canyon, then count me out. Some things done by human beings are wrong and wicked.

And they are alien to me.