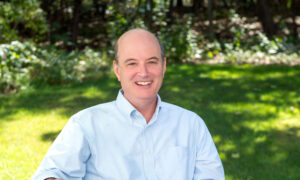 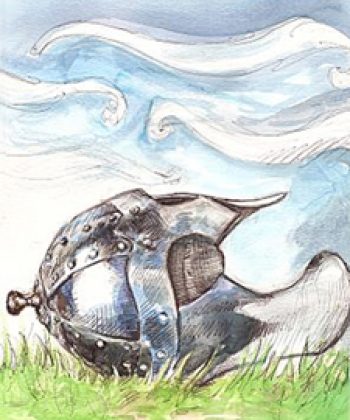 Nor ever yet had Arthur fought a fight
Like this last, dim, weird battle of the west.
A deathwhite mist slept over sand and sea:
Whereof the chill, to him who breathed it, drew
Down with his blood, till all his heart was cold
With formless fear; and even on Arthur fell
Confusion, since he saw not whom he fought.
For friend and foe were shadows in the mist,
And friend slew friend not knowing whom he slew;
And some had visions out of golden youth,
And some beheld the faces of old ghosts
Look in upon the battle; and in the mist
Was many a noble deed, many a base,
And chance and craft and strength in single fights,
And ever and anon with host to host
Shocks, and the splintering spear, the hard mail hewn,
Shield-breakings, and the clash of brands, the crash
Of battleaxes on shattered helms, and shrieks
After the Christ, of those who falling down
Looked up for heaven, and only saw the mist…

Good and bad, right, and wrong. Without these basic moral distinctions, what kind of life could we lead? Most of us, no matter how sophisticated, would prefer to live in a world where love, charity, and truthfulness are rewarded, and hatred, selfishness, and lies are punished. Yet at the same time, we know this isn’t so, at least in this world. Too often, the bad prosper and the good suffer. Still, we cling to the virtuous ideal that doing right and accepting the consequences is better than reaping the rewards of vice.

To bring this ideal to life, we look to people who exemplify the kind of morality we admire. These are our heroes, and in a diverse world such heroes are a diverse bunch, ranging from the religious and political to the mythological—from Abraham, Jesus, Gandhi, Emily Pankhurst, and Frodo Baggins to King Arthur. Even today, King Arthur remains the archetype of the fair and wise ruler, the man who wages war on the forces of evil and who, in some divine sense, can never really die.

In this extract from Tennyson’s epic poem about King Arthur, “The Idylls of the King,” his army of knights confronts the villainous Sir Modred at the head of the invading Saxons. It’s kill or be killed.

This epic moment takes place on Lyonesse, the mythical Cornish land Tennyson describes rising and sinking below the waves, like Atlantis, in bursts of volcanic fire. Here the sands are littered with “fragments of forgotten peoples,” as if the present conflict is part of a tragic cycle doomed to eternal repetition. At the very moment when good stands up to evil, a “deathwhite mist” covers the battlefield and mixes the two, bringing confusion, horror, and despair.

Tennyson brilliantly evokes the scene, as the strange mist creeps into the lungs and hearts of the knights, chilling their blood, and transporting them into an eerie realm where nothing is but what is not. This magnificent piece of imaginative writing also poses deep and abiding questions about heroism, war, and morality.

In the mist, age and youth, nobility and baseness are indistinguishable—somehow all one. The knights should act together, helping their comrades, but they all seem separated from one another, each seeing different sights, each fighting their own battle. While “single fights” rage, there is no overriding sense of purpose that would give them significance.

The passage drives toward a powerful conclusion, where the alliteration of “shocks,” “shields,” and “shattered,” “breakings” and “battleaxes” and “splintering spear” makes us almost spit the words out. We hear the “clash” and “crash” of blows falling, and we feel both exhilaration and exhaustion.

In the complete passage, the violence becomes even worse, concluding in “Oaths, insult, filth and monstrous blasphemies/ Sweat, writhings, anguish…” While Tennyson is often caricatured as a poet of languid loveliness, here the language is so visceral that it foreshadows Wilfred Owen’s nightmarish accounts of men blown to bits in the trenches.

The off rhyme of “Christ” and “mist” is telling—and disturbing. The knights cry out to heaven but are surrounded by degradation. They see only darkness. Why is there no answer? Is belief an illusion? Have the knights sinned? Is King Arthur no better than Sir Modred?

This is the kind of mist we live with today—the mist of moral equivalence. This is the idea that any judgment of any one side must also lead to an equal criticism of the other. Anything less “balanced” would be bigotry. Yet this leads to absurd conclusions that simply turn morality inside out. Thus, some tried to whitewash 9/11 by saying, “Well, we’re just as bad as al-Qaeda.” Moral self-questioning is, of course, vital to keep freedom alive and kicking, but such self-demonization destroys the moral conviction that democracy needs to avoid collapse.

Finally, the mist rises and Arthur slays his enemy, but receives a mortal wound. Dying in his tent, he murmurs, “My God, thou hast forgotten me in my death.” But like Christ, his moment of greatest doubt precedes his eventual triumph. His body is placed on a barge and sent to “the island-valley of Avilion,” wrapped up in the numinous promise that one day his irrepressible valor shall return. A myth, evidently, but perhaps no less true for that.