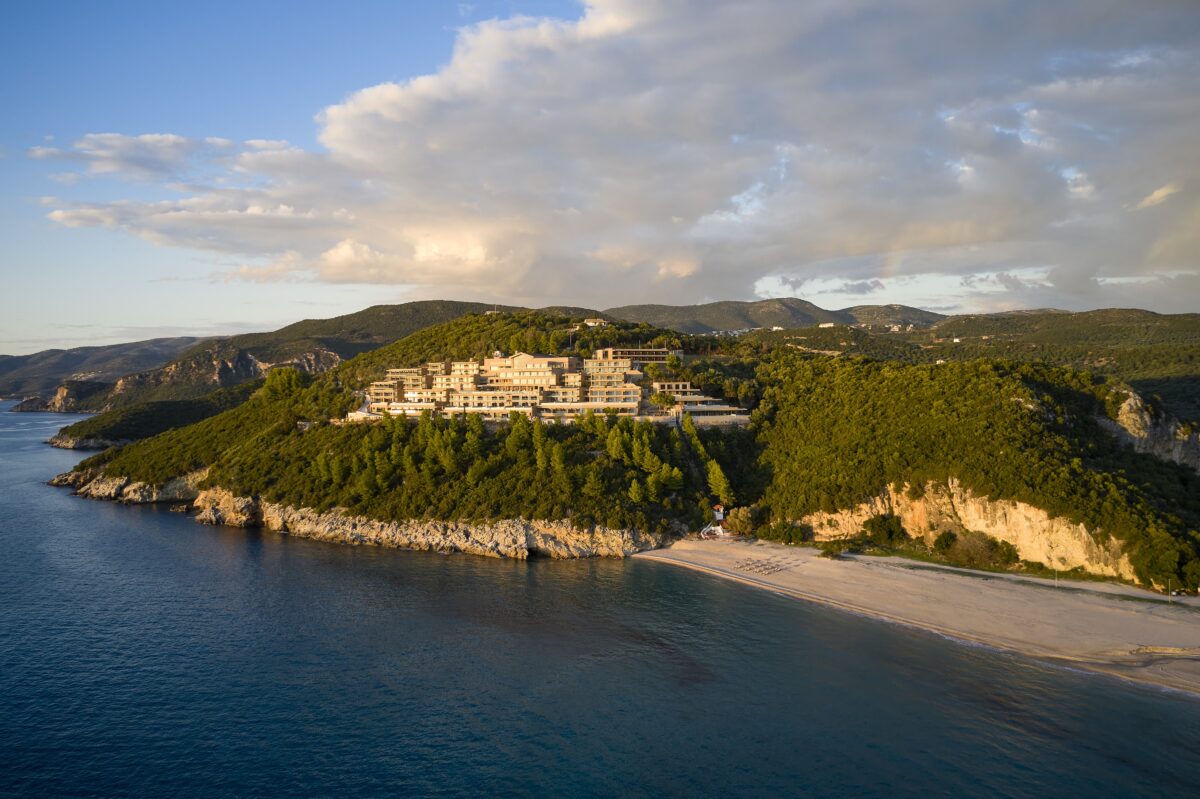 Marbella Elix is set into a hillside, amid pine forests. (Courtesy of Marbella Elix)
Travel

Finding rest and restoration between mountain and sea
BY Xenia Taliotis TIMEFebruary 25, 2022 PRINT

There was a gap. After months that seemed to stretch into an eternity of being locked down, bolted in, and burnt out by COVID-19 restrictions, a gap appeared. It was only small and narrowing even as I looked through it, yet I saw enough of the cyan sky and sea that glimmered beyond to know that I could resist Greece’s siren call no longer. I booked my flights and accommodations immediately.

Four days later, I was in a taxi, making the one-hour drive from Aktion Airport in Preveza, Greece, to the secluded, silver-gray olive groves and sun-baked bays of the quiet resort where I would be staying. I had chosen this spot, between Parga and Sivota in the northwest of the country, primarily because it still seemed so close to its past.

Even looking at photographs online gave me a palpable sense of its history; of its lands, which appeared to be steeped in magic and myth; and of its people, who would provide me with the cultural connection I had missed while being confined to the UK. I wanted to visit a place that would take me back to a different time, and in the forests of Parga, I imagined that I would be able to follow in the footprints of the ancient Greeks who had walked the mountain trails, dirt tracks, and woods thousands of years ago.

My base for my three-night break was the MarBella Elix, which promised all of the comfort of a luxury stay without any of the pomp and ceremony that I find to be off-putting. While I appreciate excellent service, outstanding cuisine, and first-rate amenities, I eschew dressy-up rules for dinner and the kind of dialed-up attention from the staff that can make me feel self-conscious.

The design was also appealing: The hotel seemed at one with the natural environment that surrounded it. Built into the cliffs at 174 feet above sea level and only having been open since April 2021, the reviews suggested that it integrated well with the acres of pine-clad verdure that lay behind it and the deep blues of the Ionian Sea, which faced it.

Half an hour after checking in, I was making my way down to Karavostasi Beach, a beautiful beach that’s about a third of a mile wide that sits in the embrace of two headlands just beneath the hotel. Although there was an outdoor lift, I chose the steep steps, lingering on my descent and stopping to take long breaths and longer looks at that expansive sea view.

On the last step, I kicked off my shoes and jumped down into the sand, savoring the sensation of the grains between my toes. At any other time, the beach would probably have been well-occupied, but the COVID-19 pandemic had done its work here as well, and people were staying away.

I sat undisturbed on the shore, with the warm sun on my back and the waves washing my legs providing the balm I needed. After 18 months of sea deprivation, the salt-spatter on my lips tasted as good as cool water after a long, hot hike. I allowed my gaze to stretch beyond the immediate, to the Corfu, Paxos, and Antipaxos islands—three jewels of the Ionian Sea. According to Greek mythology, the latter two were formed when Poseidon, god of the sea, wanted an earthly paradise for his beloved wife, Amphitrite. Unable to find the haven he sought, he struck Corfu with his trident, splintering its southern tip into new islands. He chose Paxos—which takes its name from the Greek word pathos, meaning passion—as their home.

I had earmarked Dymokastro (or Ellinokastro), a 2,500-year-old walled coastal settlement on a hill on the south side of the beach, for exploration the next day, but a chat with hotel staff took me in a different direction, through the enchanting nature reserve of the village of Perdika, and onward to the Monastery of Agios Athanasios in Thesprotia, known for being miraculous.

According to religious lore, the monastery, a place of pilgrimage, was founded in 1811 after an icon of Agios Athanasios was discovered in the hollow of the olive tree growing on the site. The icon was returned to where it had originally come from, but by the next morning, it had once again appeared in the tree. Back it went and back it came until the local people decided to grant the saint his wish by dedicating a monastery to him in Thesprotia. It’s now a custom at this sacred site for those hoping for a miracle to thread through the hollowed-out tree three times while imploring Athanasios to answer their prayers. I did the same, one, two, three—squeezing through the tree while I whispered my innermost hope.

The next day—my last—I took a boat to Paxos and sailed past the tiny islands of Panayia and St. Nicholas and into caves, stopping to swim in a thousand shades of blue. I had gone to Parga with a list of things I had wanted to see and do, but when it came down to it, I scaled my plans down. I sat on the beach, I went for walks in the mountains, and I swam and ate and rested. I had wanted to trace the origins of Greek myths that I’ve known since childhood—to visit the River Acheron, where Charon, the ferryman, transported the souls of the dead to the underworld, and Elina, the citadel at Dymokastro, the city destroyed by Zeus, god of gods, in a fit of rage when its citizens dared to worship another deity. But in the end, I simply needed to recoup.

Back home in London, I reflected on all that I had left undone and revised the wishes I had made in the tree at the Monastery of Agios Athanasios. The most appropriate thing I could hope for, I decided, was that I would once again be able to visit Parga before too long.