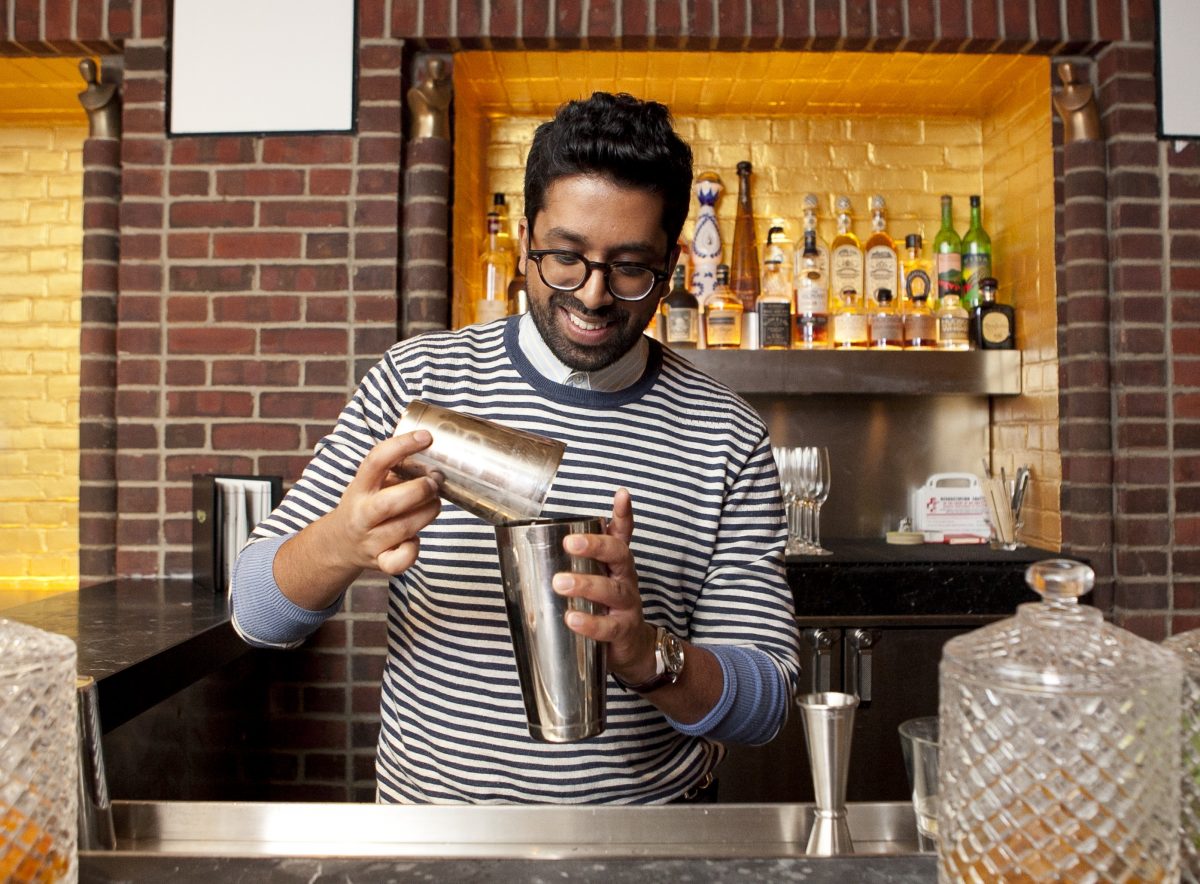 If you want to see an artist get more creative, give him or her more constraints.

Go to London’s White Lyan, opened last month by two-time U.K. Bartender of the Year, Ryan “Mr. Lyan” Chetiyawardana, and you’ll find no ice, no perishables, no citrus. It may sound like a maverick move, but from Chetiyawardana, who’s been behind the stick at some of the U.K.’s best bars, including Edinburgh’s Bramble, and London’s The Whistling Shop, it’s worth taking note.

Initially frustrated by a lack of control over basic ingredients, Chetiyawardana stripped everything back and built them back up: from the spirits, formulated to his specifications, down to the water, which he filters twice and whose mineral content he customizes and builds back up.

And there’s no ice at White Lyan, so say goodbye to the problem associated with dilution. Instead, drinks are pre-mixed and chilled at exact temperatures.

“We control the dilution, the temperature, we control the curve, the journey of the cocktail using this water,” he said.

With hefty work done beforehand and behind the scenes, the shaking and stirring mostly gone, it leaves bartenders more time to chat with guests.

As to the lack of perishables, Chetiyawardana couldn’t rely on consistent quality of produce available in the U.K., including citrus. “One time it’s just like a rock—you get no juice out of it; one time there’s no flavor to the skin; other times it’s really bitter.”

Herein lies the challenge when you’re trying to make the same drink: dealing with an ingredient that is a complete wild card. You may get a good, consistent whiskey, “a good product, and then you’re just putting a shot of really bad lemon juice in it.”

There’s no shortage of souring agents. Instead of citrus, he uses a variety of different acids: acetic (vinegar), malic (green apple), citric (citrus), phosphoric, and lactic, among others. Each has its own different taste and sensation, he said.

Even closer to home, with the Brits clamoring for strawberries year-round, and supermarkets putting pressure on farmers to comply, he said the strawberries “taste of nothing—empty bits of fruits, basically.”

Instead of perishables, he plays with ingredients like bones. Say what? That’s right. He roasts chicken bones, dissolves them in phosphoric acid, making a tincture to add to the aptly named Bone Dry Martini. “You get the clean, cereal notes of the vodka but right at the heart you get this very dry, flinty core to it,” he said.

Or take the Moby Dick Sazerac, which makes use of ambergris, an ingredient whose trade and possession is banned in the United States and that is traditionally used in perfumes. “It’s a bit of an odd one to describe,” Chetiyawardana said. “It’s like a fur ball from the sperm whale. Sperm whales eat giant squids but they can’t digest the beaks. What they do is coat them in a secretion and they cough them up and it floats around the ocean and it ages and washes up on the shore.” The aroma, he said, is heady and incredible. “It’s got this intensity about it, but gives this incredible length to the drink.”

Chetiyawardana is careful to say that his cocktails are not for gimmicks’ sake or shock factor, but he does enjoy making people look at drinks differently. “I’m often quite excited about changing people preconceptions. Cocktails should be fun … there should be something quite intriguing about them, and so having ingredients you wouldn’t normally find in a drink is a nice way of doing that.”

From London to New York

That’s London, but hop back across the pond to New York, and you’ll find that what Chetiyawardana has been tapped to create is clear across the spectrum, but just as fascinating. At Henry, a bar at the Hudson Hotel on West 58th Street, he brings his trademark inquisitiveness and experimentation, but with a vast array of incredible raw materials at his disposal.

Where crummy produce was his lot back in the U.K., at Henry, he has access to a caliber of produce and ingredients he never did before, not to mention a “room of gadgets” that he’s keen to explore.

We’re not talking run-of-the-mill bartending equipment here. There’s a rotovap, short for rotary evaporator, used to “suck all the air” out of things. “You drop the pressure and you can do things with a low temperature. Instead of cooking the flavors, you can use alcohol, use distillation to capture all that flavor but you can do it cold essentially. You don’t cook any of the flavors and you don’t get the off notes to it. It’s bright, it’s really fresh, and you’ve got this lovely crispness to it.”

It’s used, for example, to distill the jasmine essence into a liqueur in the Jasmagne, which also has Veuve Cliquot champagne and preserved cherry. “That white flower, the elegance about it, it’s matched with champagne, It’s a really elegant drink as well.”

“The whole idea was to sum up the feeling of the season—not what’s in season at this time. With fall there are chillier days but there’s a golden warmth about fall, it’s quite magical in that sense.”

The cocktail menu is quite short but distinctive, featuring different ingredients that here too, one might not expect in a cocktail. There is roasted eggplant in the Deadly Nightshade cocktail, along with Bacardi 8-year aged rum, Lillet Blanc, vanilla demerara, and lemon.

And in Celery Fizz, yes there is celery, using the rotovap to extract the brightness and freshness of the celery, root, seeds, and all.

Summing up the feeling of winter, on the other hand, is all about the idea of hibernation, and looking for something warming and relaxing when you’re taking refuge from the cold and the elements.

He’s looking to traditional preserving techniques. “What’s amazing is how the flavors of the ingredients change.”

Parsnips, for example, will feature. “Once you start to store them, the starches break down, and you get a different translation of the parsnip rather than when it’s at the peak of the season.”

“You can store things in soil, or pack things in sand, so they don’t break down the same way. We’ll do a bit of that. We’ll do things like pickling, salting, … all that kind of stuff is what’s cultures have always done as a means of getting through the winter.”

The menu is charming and whimsical, and includes Chetiyawardana’s own drawings and writing, with a story that ties back to the bar’s namesake, explorer Henry Hudson. The less said, though, the better. The history and inventive cocktails are best left for guests to discover on their own.