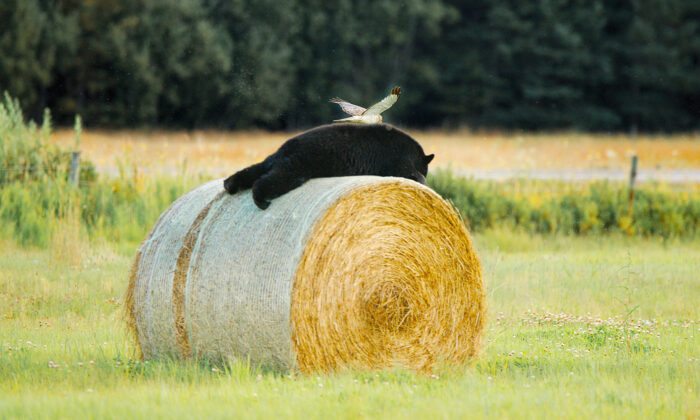 While on call in British Columbia, a heavy-duty truck mechanic saw a black bear lounging on a hay bale and whipped out his camera. As a northern harrier swooped over the scene, the ingredients for a rare photograph aligned.

Originally from Fribourg, Switzerland, 32-year-old Serge Wolf has lived in Prince George, in Canada’s British Columbia, for just over four years. He was on a job site just north of Prince George when the crew was joined some 100 meters away by a curious creature.

“The bear was present the entire time,” Wolf told The Epoch Times. “He was eating clover, sleeping, and checking us out from time to time.

“It looked very cute and one doesn’t usually see a bear on a bale,” he recalled, “so I was hoping that he stayed there until I had time to take some shots, and he did.”

Wolf, who has been exploring wildlife photography for over a decade, fetched his camera on his lunch break. As he chatted with the owner of the site, a harrier—a large bird of prey endemic to British Columbia—flew over the field.

“I was joking that it would be nice to have both in the same frame, and, moments later, the harrier flew through my viewfinder,” Wolf recalled.

“The harrier is a little closer than the bear, but the angle makes it look as if it could grab the bear. It almost looks like little angel wings.”

Shooting with a Nikon D850 camera and Sigma 150-600mm lens, Wolf used single point, back-button autofocus to keep the harrier in clear view as it flew. “I did not really expect for it to actually fly over the bear,” he said. “When it did, I stayed on the northern harrier and was able to get the shot.”

Later that afternoon, Wolf showed the photo to co-workers and realized he might have something special. Excited about the “lucky shot,” he shared the photo on a Prince George community Facebook page for others to enjoy.

Wolf’s interest in photography grew out of his love for birds. On a trip to Canada 12 years ago, he became enthralled by the birds he saw and started taking photos for identification.

As his hobby grew, so did his camera equipment collection.

While capturing unique moments is “something deeply satisfying” for Wolf, he claims that the power of photography to inspire conservation efforts is endless.

“I now see photography as a way of showing people things they don’t necessarily see,” he said. “It makes me more than happy if my photography helps someone to understand nature a little more, and to protect it more than before.

Wolf said that when people ask him how he comes across all these special nature moments, he always tells them, “Only people who look, see.”

“People today tend to walk, drive, or run through life with their heads down, ears numbed with music, and eyes on a screen,” he said. “That’s not how you will see. Get out, even if it’s just your backyard, look at the small wonders of nature, connect with it, and you will see more and more as you get aware of your surroundings.”

Wolf encouraged, “You can be sure that there is a lot more out there to be seen, take pictures of, and leave us in awe.”