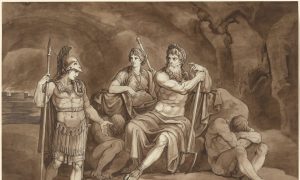 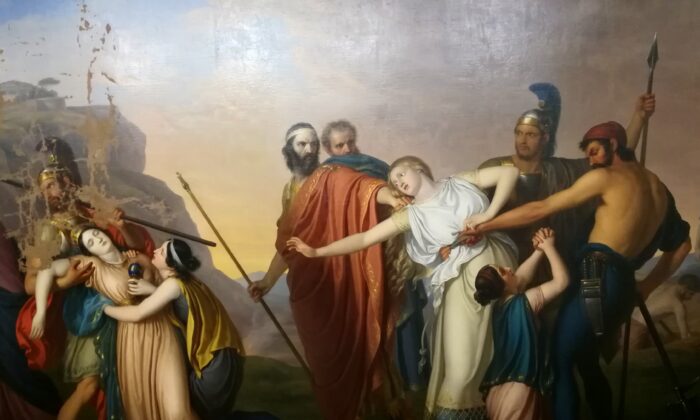 And Still She Speaks to Us: Truth and Beauty in ‘Antigone’

These three elements exist in any great work of art. Though most of us are neither learned in epistemology nor trained in aesthetics, we possess an eye for truth and beauty in art. We feel overwhelmed when we first encounter Michelangelo’s “David” or Caravaggio’s “The Martyrdom of Saint Matthew,” though the difference in these pieces—the sheer size and calm aspect of the enormous statue versus the terror and violence of the canvas—tells us that beauty comes in many guises.

Along with beauty, great art speaks truth to its audience. Here again, definitions prove elusive, but the artist’s vision and the skill demonstrated in the creation of that vision speak to our minds and hearts, eliciting emotions like joy or sorrow. Even if just for a moment, we share with the artist the profound truth of what it means to be human.

John Keats understood this union when he wrote:

Truth is beauty, beauty truth,
That is all ye know on earth, and all ye need to know.

In “Antigone,” Sophocles’s play about a girl determined to give her brother a proper burial, despite the king’s orders to the contrary, truth and beauty blend together, creating a masterpiece that even after 25 centuries has much to teach us today.

I have taught “Antigone” to high school students, and just this past week read the play once again. Dudley Fitts and Robert Fitzgerald are the translators, and the book in which their version appears is the text I once used in the classroom, X.J. Kennedy’s “Literature: An Introduction to Fiction, Poetry, and Drama.”

“Literature” is a marvelous, fat compendium; I often pick it up, read from it here and there, and remember the happy days when I was a teacher.

I mention this anthology because in it, Shakespeare’s “Hamlet” treads directly on the heels of “Antigone.” In “Hamlet,” we find the Bard’s lush flowerbeds of blank verse: the lengthy descriptions, the wit and wordplay, the soliloquies, the stage often busy and tumultuous with characters.

In striking contrast stands “Antigone,” a drama as stark in its beauty as the mountains of the Aegean. Only a few actors people the stage of Sophocles, and the playwright keeps description to a minimum. Within just a few lines of the play’s opening scene, Antigone is telling her sister Ismene that she intends to bury their brother Polyneices, despite King Creon’s declaration that Polyneices is a traitor and that “his body must lie in the fields, a sweet treasure for carrion birds to find as they search for food.”

Because of the barebones writing, the plot of “Antigone” moves at a fast clip, with Antigone soon arrested for sprinkling dust and wine on her brother’s body. King Creon passes the sentence of death on her even though Antigone is his niece and Creon’s son, Haimon, loves her. The king incarcerates her in a cave, where she dies by her own hand; the grief-stricken Haimon commits suicide, followed by the suicide of his mother. Left alone, King Creon admits, “Whatever my hands have touched has come to nothing.”

The Choragos, the head of the chorus, then ends the play with four simple lines directed to the audience:

There is no happiness where there is no wisdom;
No wisdom but in submission to the gods.
Big words are always punished,
And proud men in old age learn to be wise.

The end of “Hamlet” brings a squadron of deaths as well, but the farewell is prolonged and ripe with description.

Yet both works are charged with their own particular beauty.

The conflict in “Antigone” is greater than the battle of wills between the princess and king. Antigone stands on the side of custom and the will of the gods. Creon represents the state and earthly laws. When Creon says to her, “And yet you dared defy the law,” Antigone replies:

I dared.
It was not god’s proclamation. That final Justice.
That rules the world below makes no such law.

Sophocles reveals his artistry by refusing to stack the deck against Creon in these arguments. Several times, the king points out that obedience to the law is a necessity for any well-run government, at one point shouting, “Anarchy, anarchy! Show me a greater evil!”

Yet in the end, it is Antigone who wins this debate. The soothsayer Teiresias and the Choragos convince Creon to give way, and he goes himself to remove her from the sealed cave, only to arrive too late to prevent her death.

In “On Moral Fiction,” which caused a literary ruckus on its publication in 1978, John Gardner launched an attack on relativism in our modern arts, writing “What we generally get in our books and films is bad instruction: escapist models or else moral evasiveness, or, worse, cynical attacks on traditional values such as honesty, love of country, marital fidelity, work, and moral courage.”

Antigone as created by Sophocles serves as an example of moral courage. In his artistry—his juxtaposition of ideas, his language, the pacing of the drama—Sophocles also gives us some universal truths. He addresses the conflict between individual conscience and the state, but he also reaches even deeper into what it means to be fully human, allowing us to perceive certain universal truths of the heart and soul: a respect for the Divine and a love for family as opposed to the power and danger of arrogance.

To endure, great art must speak across time and culture. Sophocles won fame in Greece for his plays, and the very fact that his dramas are still performed, studied, and anthologized today bears witness to their relevance to our time.

Here are a few examples of that relevance from “Antigone.”

From Antigone we also catch a glimpse of the Greek version of political correctness. Though her fellow Thebans admire her for her filial devotion and her courage to stand for the good, they are fearful of defending her. At one point, she says to Creon:

I should have praise and honor for what I have done.
All these men here would praise me
Were their lips not frozen shut with fear of you.

And when Haimon pleads with his father to suspend Antigone’s sentence of death, he reminds us of one of the causes of our own poisonous political and cultural environment:

I beg you, do not be unchangeable:
Do not believe that you alone can be right.
The man who thinks that,
The man who maintains that only he has the power
To reason correctly, the gift to speak, the soul—
A man like that, when you know him, turns out empty.
A reminder to us all about the value of humility.

Antigone also reminds her sister and the audience of the value of honor, a word we hear little of these days outside of the military. “I am not afraid of the danger,” she tells Ismene. “If it means death, it will not be the worst of deaths—death without honor.” She reminds her audience, in this case us, that there are worse fates than death and that honor matters.

In his Preface to “Literature,” X.J. Kennedy writes: “To leap over the wall of the self, to look through another’s eyes—this is valuable experience, which literature offers.”

If we leap over those walls, if we look hard enough through the eyes of Antigone, we may well find ourselves looking into a mirror.