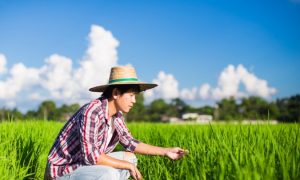 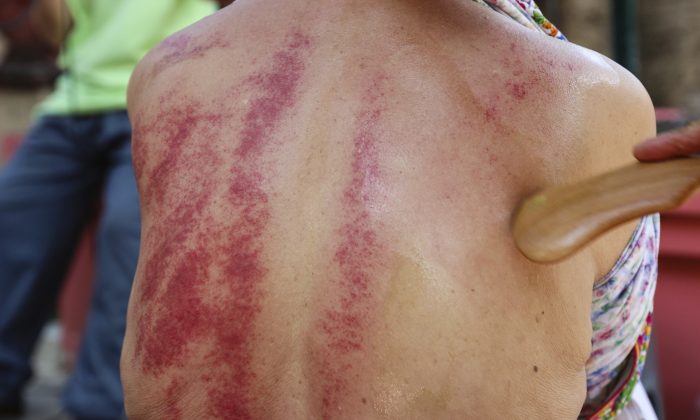 One of the major objectives of Chinese medicine is to clear stagnation.

If water cannot flow from a hose, you have to untangle the kink. Acupuncture aims to free blocked qi in the internal organs. A technique called gua sha unties knots closer to the surface.

Gua sha has been used for at least 2,000 years, and is probably the easiest modality in Chinese folk medicine to learn. You don’t have to know the locations of any acupuncture points or meridians. With a little instruction anyone can do it, yet it can still be extremely effective. Pain and range of motion can improve in just one session.

“Gua sha” means “scraping sand” in Chinese, and the process actually produces an image similar to a charcoal rubbing. In this case, the paper is your skin, and the charcoal is a smooth, blunt edge (traditionally a porcelain soup spoon). Applying firm strokes creates marks which reveal where stagnation lies in the muscle.

Gua sha marks range in color from light red to dark purple, and can be mistaken for signs of injury or abuse. But according to Kathleen Greenough, a licensed acupuncturist and gua sha instructor at the Pacific College of Oriental Medicine in New York City, gua sha applied properly should not be painful, and does not injure the tissue.

“It looks like we are creating a bruise, or like we are breaking capillaries and causing some damage. What we’re actually doing is extravasating blood from the capillary bed,” she said.

Gua sha helps break up congestion in the form of congealed blood from an injury, or lactic acids and other toxins that build up in the muscles due to over use. As these problems are pulled out of the tissue, they are released into the blood stream so that they may be removed from the body.

Greenough explains the process to her students and patients as deep cleaning in a house where dirt was previously swept under the rug.

“Things look good on the surface, but that mess is still there. So we’re using this method to help clear up that stagnation and congestion, to help let things flow again, to help the body to heal itself,” she said.

Lubrication is a must for gua sha. Dragging a blunt edge over a dry muscle can be painful and make tension worse. To create a slick surface, many use Tiger Balm—an easy-to-find liniment with a lid that can double as a scraping tool. Gua sha liniments often contain herbs and essential oils with properties that further loosen tight muscles, but any balm, ointment, or massage oil will do. Olive oil will work in a pinch.

Unlike massage, gua sha requires a tool—something with a rounded edge that can be comfortably stroked across the body. Tools range from stones and bones shaped specifically for the job to large coins. Greenough’s favorite tool is made of oxhorn which gets cleaned and disinfected with each use. In the interest of something even more hygienic, the modern trend is moving toward a disposable cap.

Gua sha is primarily performed on the back, neck, and shoulders, but other body parts may be included as well.

“The forearms are good place to do gua sha on because people have things like carpal tunnel, or overuse syndrome from overdoing it on the keyboard or mouse,” said Greenough. “We can help clear that inflammation, that congestion, and prevent things from getting to the point where carpal tunnel could be expressed. If they do have carpal tunnel, we could help them remove that pain and inflammation to help heal it.”

Gua sha is effective on its own, but it can also complement an acupuncture treatment. Both modalities work to relieve stagnation, but when gua sha takes care of the heavy lifting, acupuncture can work even better.

“Depending on what I think the person can take, maybe I’ll do a gua sha treatment to start with, and clear out all of the road blocks and get the circulation flowing,” said Greenough. “For the next treatment I would do acupuncture, because now I know the acupuncture is going to be able to work because the meridians and the area is now open.”

In addition to addressing muscle pain, gua sha can help with other issues —such as migraines, colds, flu, fever, bronchitis, and cough. Working on the back behind the lungs can relieve stagnant phlegm.

In China, gua sha is used to treat chronic inflammatory conditions, such as hepatitis. According to Dr. Arya Nielsen, author of gua sha textbooks for U.S schools of Oriental medicine, research pointing to gua sha’s ability to heal an inflamed liver looks promising.

In her article, “The Science of Gua Sha,” Nielsen says that larger trials are needed to establish a frequency and dosage of gua sha treatment. However, “if the research bears out, gua sha will have an essential role in managing chronic active hepatitis,” she writes. “One could say if it were a drug, establishing this effect would be considered a medical breakthrough.”

In an email to Epoch Times, Nielsen wrote that the treatment “reduces inflammation and protects the cells of internal organs and has clinical significance for patients with chronic illness including disease of the heart, lung, liver, kidney and vascular system.”

Nielsen is particular about the terminology. “I never ever call gua sha ‘scraping’ because it misleads,” she said. “We do not scrape, but press-stroke. Even the Chinese are changing this and calling gua sha press-stroking to intentionally raise transitory therapeutic petechiae.”

Gua sha is virtually free from side effects, and research shows that its anti-inflammatory and immuno-protective effects last for days following a single session. However, don’t schedule a night on the town in a backless dress immediately following treatment.

As trapped toxins are released into the blood stream, the body needs some extra care. Following a gua sha treatment, Greenough advices patients to relax, drink extra water, refrain from alcohol for at least 24 hours, and keep the treated area covered and protected from cold.

“It can be somewhat draining because we’ve taken stuff that’s been hidden under the rug and now we’re making the body deal with it,” Greenough said. “So it’s best to let the body use its energy to deal with this mess that’s been brought up to the surface and get it cleared away.”