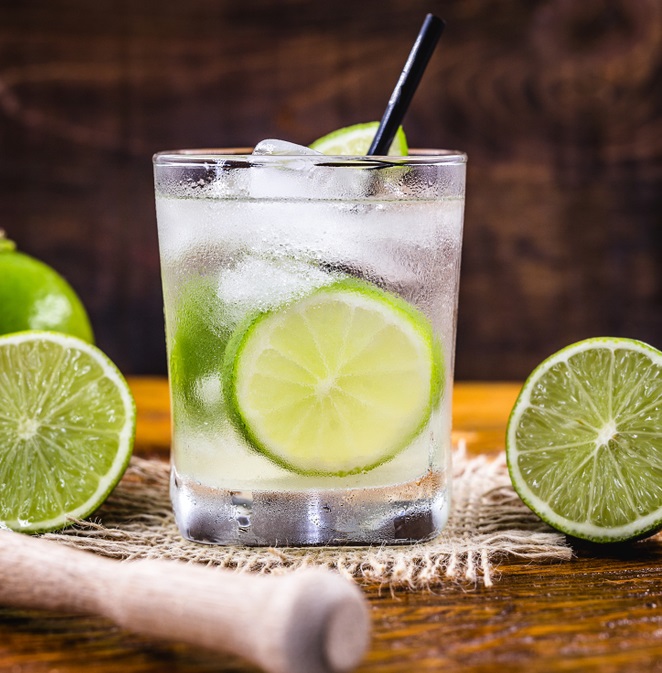 This refreshing cocktail is wildly popular in Brazil. (RHJPhtotos/Shutterstock)
Food

Anatomy of a Classic Cocktail: The Caipirinha

The national drink of Brazil, this citrusy, chilled cocktail has grown in popularity in bars across the world, thanks to its fresh flavor and simplicity. Consisting of lime, sugar, and clear alcohol, a caipirinha may sound like the beginnings of a mojito—and the drinks do share origins as medicinal concoctions believed to be good for colds and the flu—but rather than rum, caipirinhas call for cachaça (kah-SHAH-sah).

Both spirits are distilled products made from sugar cane, but while most rum comes from molasses, the byproduct of processing sugar, cachaça is made directly from fermented and distilled sugar cane juice. Cachaça has a fruitier nose and a brighter, gentler character than rum; it also requires less of a process to produce, especially the unaged, “white” variety. This unaged version of cachaça is typical as a mixer, though the barrel aging does lend it color and a stronger flavor. Its strength varies from 38 to 48 percent alcohol.

The Portuguese brought sugar cane to Brazil when colonizing it in the early 1500s. Sugar cane juice was already being distilled in Madeira at the time, and the practice followed the Portuguese to the New World. The mix for caipirinha, however, is believed to have originated with landowner farmers in the countryside of the state of São Paulo. Pronounced kai-pur-EEN-ya, the name is a diminutive form of what has since become a condescending word for “country folk.”

While caipirinhas are rapidly gaining international popularity, cachaça can only be produced in Brazil. For years, the U.S. Alcohol and Tobacco Tax and Trade Bureau (TTB) required labels on imported bottles to read “rum.” But a “Legalize Cachaça” campaign, spearheaded by Brazilian distillery Maison Leblon, aimed to give back the distillate’s name and distinction, and to guarantee its Brazilian origin. In 2013, the TTB passed a rule that did exactly that.

Some caipirinhas may swap rum or even vodka (with the resulting cocktail called a caipiroska) if cachaça isn’t available. In Brazil, it’s cachaça or nothing—but the Brazilians are always willing to play a bit, and will add pineapple or other fruits for a twist on the classic.

Use ripe, juicy, fully green limes (not Key limes), and don’t muddle them too hard or you’ll get the bitterness of the pith. Use ample amounts of ice cubes—not excessively crushed, but also not oversized cubes. It should be properly chilled, yet lightly diluted.

Place the lime wedges directly into the serving glass (a rocks glass will do), then add sugar and muddle to release the juice. Add ice, pour in the cachaça, and give it a good stir.