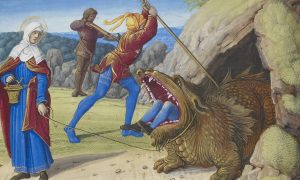 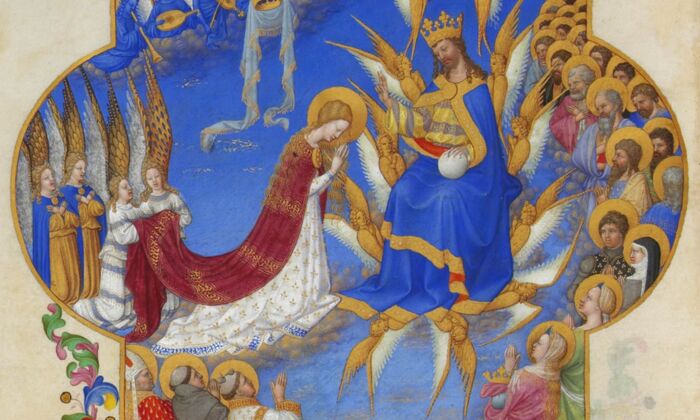 Detail of"The Coronation of the Virgin," from "The Very Rich Hours of the Duke of Berry," Folio 60, back; between 1412 and 1416, by the Limbourg brothers. Tempera on vellum; 8.8 inches by 5.3 inches. Condé Museum, France. (PD-US)
Fine Arts & Craftsmanship

In the first half of the 15th century, Western Europe was at the tail end of the Hundred Years’ War, a series of conflicts between France and England to win the powerful kingdom of France. War and plague were rife. Turmoil, heartache, and despair were the mainstay for many medieval Europeans.

No one was left unscathed.

During such tumultuous times, strong faith and a mustering of some form of hope is necessary for day-to-day survival. As sure as the ebb and flow of night and day, the only constant in such challenging times is time itself. As such, a calendar helps us to move forward and to hope for both regularity and something better—the future.

In Western art, one of the most exquisite calendars to be found is at the beginning of the 15th-century devotional manuscript “The Very Rich Hours of the Duke of Berry.” The calendar contains lavishly decorated, idyllic scenes of medieval courtly and pastoral life alongside stunning medieval architecture—all painted in rich and often rare colors, embellished in gold.

The entire 15th-century masterpiece by the Limbourg brothers is lauded as one of the best surviving examples of the late International Gothic style of illumination. As such, the illuminations had a huge impact not only on the style of illuminated manuscripts thereafter but also on the process of painting.

For instance, art historian E.H. Gombrich in his book “The Story of Art” said of the preeminent 15th-century Netherlandish painter Jan van Eyck, “He rather pursued the methods of the brothers Limbourg, and brought them to such a pitch of perfection that he left the ideas of medieval art behind.”

Van Eyck may have left medieval art behind, but the Limbourg brothers’ art continued to inspire artists. For instance, 16th-century Flemish artists copied the figures and sometimes whole compositions found in the calendar.

The Book of Hours

In Europe, books of hours were most popular between 1350 and 1480. In France, the manuscripts became popular in 1400 when pious patrons commissioned artists to create their personal book of hours: a lay version of the breviary used by clergy that consists of prayers and readings to be read at certain times of the day and night (the canonical hours of the liturgical day).

Generally, each book of hours contains, at the beginning, a calendar of church feasts and saints’ days, often illuminated with the Labors of the Months. The order of the prayers and devotional practices differs in each book depending on the book’s owner and home region. Of all the illuminations, the Hours of the Virgin were deemed most important and were often the most opulently decorated.

‘The Very Rich Hours of the Duke of Berry’

Commonly known as the Limbourg brothers, who were three Flemish miniature painters and brothers, Paul, Herman, and Jean created “The Very Rich Hours of the Duke of Berry.”

The brothers’ uncle Jean Malouel was the court painter for Philip the Bold (the Duke of Burgundy). For two years, Paul and Jean worked for the duke as well, and when the duke died in 1404, all three brothers began working for the duke’s brother Prince Jean, the Duke of Berry, the third son of King Charles V of France.

The duke was an extravagant art collector. He compiled a vast collection of illuminated manuscripts and a library of astronomical treatises, cartographical folios, Bibles, psalters, missals, and breviaries, including 15 books of hours.

The duke commissioned the brothers to create two illuminated manuscripts. The first was “The Beautiful Hours of Jean of France, the Duke of Berry,” now held at The Met Cloisters in New York. Then between around 1412 and 1416, the brothers created “The Very Rich Hours of the Duke of Berry” in France, now held at the Condé Museum in Chantilly, France.

Production of the book halted in 1416 when the three brothers (all under 30 years old) and their patron, the Duke of Berry, died, many presume of the plague. The book was described as “The Very Rich Hours of the Duke of Berry” in an inventory after the Duke of Berry’s death, in honor of its very ornate decoration and to distinguish the unbound, unfinished book from the 15 other books of hours in the duke’s collection.

Many unknown experts such as calligraphers, gilders, and artists specializing in decorative borders made their mark on “The Very Rich Hours of the Duke of Berry.”

Besides the Limbourg brothers, two other illumination artists are known to have contributed to the manuscript. The first artist is thought to be the Netherlandish artist Barthélemy van Eyck, although some scholars disagree and call him the “intermediate painter” who, around 1440, finished some of the incomplete illuminations. Then between 1485 and 1489, the Duke of Savoy commissioned French miniature painter Jean Colombe to complete certain illuminations for the hours. Scholars have distinguished the different artists by the styles and costumes the figures wear.

The Limbourg brothers’ style of illuminating was pioneering. Their illuminations are important in the development of the Northern traditions of landscape and genre painting. Of the 206 leaves that “The Very Rich Hours of the Duke of Berry” contains, there is an unusually large number of illuminations: 66 larger miniatures and 65 smaller ones.

According to the Visual Arts Cork website, when Paul visited Italy, he was inspired by the frescoes of the Italian painters Taddeo Gaddi (Giotto’s godson) and Ambrogio Lorenzetti. After his trip, Paul’s illuminations imitated and surpassed the Italian painters’ naturalistic renderings and simple linear perspective. In addition, all three brothers were influenced by Byzantine art, which they observed in the Sienese School of painting that upheld the Byzantine tradition.

The brothers painted using perspective, and they painted truer to life by incorporating solid figures, architecture, and even introducing shadows. But the figures still took on the more elongated look that was characteristic of the International Gothic style of painting.

In addition, rather than incorporating the calendar’s illuminations into the text, as per tradition, the brothers included standalone miniatures that were set apart from the calligraphy.

At the top of each calendar illumination are the solar chariot, the days of the month, and the sign of the zodiac.

Normally, December would show a pig being hunted in readiness for the duke’s Christmas feast. Instead, Barthélemy van Eyck’s illumination is a scene deep in the forest, where hounds skin a wild boar. Vincennes Castle, the duke’s birthplace, peeks out above the trees.

An abundant feast is underway in January, for which the Limbourg brothers have depicted a sumptuous meal with expensive food, drink, and tableware. The Duke of Berry sits at the table to the right in a distinctive fur hat and deep-blue cloak with gold motifs. Fleur de lis and swans are depicted up high on a tapestry. And the tapestry at the back indicates past battles won.

February shows the duke’s servants working his land in the height of winter. The farmers have tended the sheep, and there are beehives on the land too. One man is goading a donkey up the hill to deliver goods to the village, another is chopping a tree for firewood, and others are inside warming themselves by a fire.

Farmers prepare the land in March in readiness to plant grapevines. A man steers two oxen pulling a plow, another readies himself with seed, and others seem to be tending the previous year’s grapevines. And in another field, a shepherd tends his sheep.

In the top right corner of the illumination, a winged dragon, flying above the Duke of Berry’s Castle of Lusignan (Poitou), represents the fairy Mélusine. Mélusine is featured in folklore in France, the Low Countries, and Cyprus, as a lady with her lower body as either a fish or a serpent.

In April, a couple exchange rings as they get engaged in front of witnesses. The scene is full of graceful figures in both their dress and mannerisms, accentuated by their elongated limbs. The castle in the background could be Dourdan Castle, that still survives, or Pierrefonds Castle.

Continuing April’s gaiety, trumpeters in May lead a party of youths into the forest to collect twigs and leaves to wear as crowns or necklaces, a spring tradition. The architecture in the background could be the City Palace in Paris, where the kings of France lived from the sixth to the 14th centuries.

In June, peasants on the banks of the river Seine can be seen making hay in a harmonious composition. The men to the right rhythmically scythe the grass, and the women rake the hay. More people can be spotted in a boat, complete with their shadows, and to the right of the boat on the castle walkway, people can be seen ascending the stairs in the distance.

June’s backdrop is the City Palace in Paris (also seen in the April illumination). The church tower to the right is the palace chapel, St. Chapelle, a Gothic masterpiece.

Pleasant and productive pastoral scenes continue in July, where peasants shear sheep and cut the harvest, with Poitiers Palace in the background.

In August, a group on horseback, led by a falconer on foot, go out for a hunt. The falconer holds a stick that he will use to beat the bushes and encourage the game to take flight. Hunting dogs are there to encourage the birds to come out of hiding and to capture a bird once it’s been shot.

Étampes Castle is in the background, and the middle ground shows peasants working the fields, harvesting the sheaves of what may be wheat.

The Limbourg brothers, Barthélemy van Eyck, and Jean Colombe all contributed to the September illumination. In the foreground, farmers harvest the land. These figures are thought to have been painted by Colombe and don’t appear as elegant as those painted by the Limbourg brothers or van Eyck. Indeed, some of Colombe’s figures bring a humorous air to the calendar, but always at the farmers’ expense.

Saumur Castle in Anjou is depicted in the September illumination in exquisite detail right down to the lily flower weathervanes seen on the castle’s turrets.

For October, farmers on the banks of the Seine in Paris are plowing the land and sowing seed. Attention has been given to every little detail: The man sowing seed on the right has made footprints in the wet mud and the three boats further back behind him cast shadows. Louvre Castle is pictured in the background. The castle no longer exists, but Louvre Palace now stands on the site.

Colombe painted the November illumination, which again contrasts with the more dainty illuminations by the other artists. Colombe depicted a peasant with his dog tending his swine. The swineherd is beating the oak trees with his stick to feed acorns to his pigs.