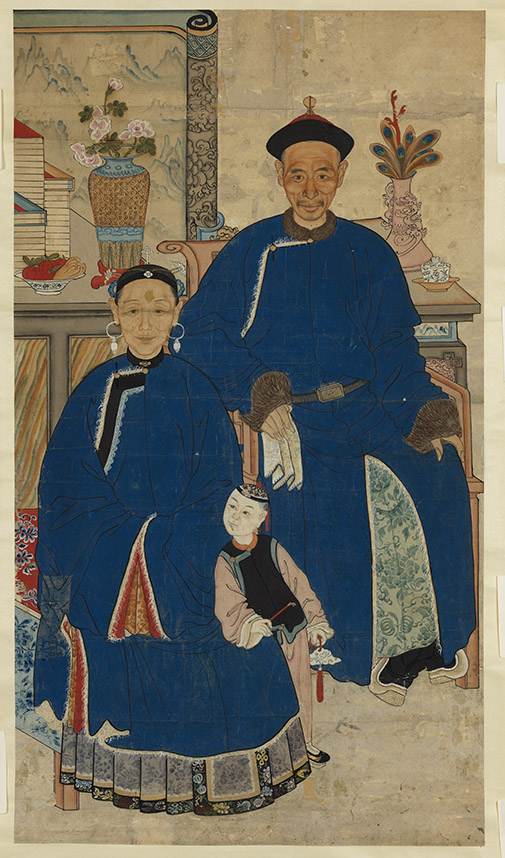 Ancestor portrait of a couple contains a picture of a child leaning toward the woman, which is symbolic of fertility; Qing Dynasty (1644–1911), by an unidentified artist. Hanging scroll, ink and color on paper; 54 1/2 inches by 30 1/2 inches. (2013 Royal Ontario Museum)
Arts & Culture

An Ancient Chinese Tradition: A Home Full of Deities

In the not too distant past, the Chinese freely worshiped their ancestors and deities within their own homes. Worship was an important part of daily life and had been that way since ancient times.

Since the Chinese Communist Party (CCP) took control of the Republic of China in 1949, it has discouraged and finally all but destroyed traditional Chinese culture. Today the religious and traditional beliefs of the Chinese people have been banned, and any trace of their existence has been virtually destroyed or maligned.

Private devotional artworks may no longer exist in China, but many large institutions around the world hold examples of these images, Wen-chien Cheng explained in a phone interview. Cheng is the co-curator of “Gods in My Home: Chinese New Year With Ancestor Portraits and Deity Prints,” an exhibition at the Royal Ontario Museum, Canada, which closes on Jan. 5, 2020.

A lot of these images rarely survived because they weren’t deemed collectible items, or perhaps they were pasted onto the walls of homes, or were burned as part of devotional rituals, Cheng explained. And, of course, many images were destroyed by the CCP.

Some of the ancestor portraits seen today were purchased by Westerners in the early 20th century. At that time, China experienced immense political turmoil after the fall of the Qing Dynasty in the Republican Revolution of 1911. Many Chinese had to sell their family devotional heirlooms to survive, Cheng said.

And in the early 1920s, she said, many of the images survived thanks to the missionaries and explorers who were in China. The missionaries were fascinated by the fact that the Chinese worshiped many gods, in contrast to their one God, and they wanted to study the images to understand more. They “found all these images curious, very interesting, and very cheap to acquire,” she said.

Exhibits in the show deliberately vary in quality, from elaborate, commissioned ancestor portraits to simple paper prints. The selection shows that whether a devotee was rich or poor, the intent behind each image was the same: pious worship.

Cheng invites visitors to view the exhibits with a similar sense of curiosity as the missionaries had, because in Chinese culture the “human relationship with the divine spirit may differ from other cultures,” she said.

Since ancient times, the Chinese have acknowledged and believed in the presence of divine spirits, Cheng said. They believed that “keeping a harmonious and good relationship between the divine spirits and the earthly world is the key to keeping the wellness of the people.” Honoring the divine and gaining blessings is a universal belief across many religions, she added.

All Chinese people would have been aware of the universally worshiped deities. These originated from various sources, such as the religions of Daoism and Buddhism, and traditional legends. For example, the Buddhist Bodhisattva of compassion, Guanyin, can be seen in the home in many different ways. Each form Guanyin takes depends on which of the 33 manifestations, male and female, might help with particular human dilemmas. These manifestations, Cheng said, are detailed in the Lotus Sutra, a Buddhist verse. For instance, Guanyin can be seen as the goddess of childbirth, often holding a baby in her arms.

Other examples might be stove gods, who have a protective presence in the household, or professional deities that bring prosperity to particular professions. Even legendary figures could become deities that guard a business.

The ancestor portraits may seem similar to the Western portrait tradition, where portraits would be hung in a castle or a stately home. Cheng pointed out that unlike Western portraits, Chinese portraits were not displayed year round. They were taken out for certain periods of time to be worshiped, such as New Year, and then carefully stored away.

Wealthy families would commission their own portraits while they were alive, to prepare the image to be worshiped after they died. Poorer families would buy generic prints of a couple and then add the family name. In these images, a spirit tablet would usually be depicted.

The spirit tablet is a wooden structure that is named after an ancestor and gives the wandering soul a place to reside; the tablet represents the spirit of the deceased. These tablets would be housed in a special cabinet in the hallway of a home or in the family shrine.

Sometimes, the spirit tablets depict deities. There is one in the Royal Ontario Museum collection that represents the God of Fortune, Cheng said.

A unique exhibit is a miniature shrine, and this is the first time that the shrine has been on show since its acquisition in 2009. Miniature shrines were commissioned by the wealthy to house their spirit tablets, and the shrines imitated the actual architecture of the family shrines.

The spirit tablet represents an ancient Chinese belief, Cheng said, that when a person dies there are two different souls—one ascends to the heavens and the other goes under the earth. Cheng recalls a banner in a Han Dynasty (206 B.C.–A.D. 220) tomb, although the belief predates this time. The banner shows an earthly monk that houses the earthly soul, along with images of the soul (the second soul) ascending to the heavens.

The Power of Worship

Some of the simplest images on show are the paper gods, which form a set called “100 pictures,” representing the gods in the universe. “They’re very simple but also very powerful images that people [would] worship,” Cheng said.

The exhibition has 78 Beijing paper gods, which are in the distinctive Beijing style: a simple outline printed on paper that is lightly brushed with color, a little red and sometimes green, to finish the images. The major focus is on the face of the deity, as can be seen in “The Dragon King” image.

The “100 pictures” would be part of the Chinese New Year celebrations. You wouldn’t necessarily have to have a full set. Poorer families would have an image of a god on top of a pile of blank papers. “The emphasis was as long as you were very sincere and you believed in the image, that [it] really represented the gods, it would … represent the gods,” Cheng said.

The Chinese believed the deities came down to earth the moment the New Year arrived. Typically, on Chinese New Year’s Eve, an altar table was set up with these paper gods. When the first hour of the Chinese New Year approached, incense and firecrackers were lit, and after worshiping the paper gods, the images were burned in order to send the deities back to the heavens. This tradition still takes place in some small villages in China.

Some of the traditions mentioned here continue today in places like Taiwan. And even though the CCP has banned traditional culture in China, Chinese people in Hong Kong and some remote villages in China still honor their true heritage and carry out these traditions too.

To find out more about “Gods in My Home: Chinese New Year With Ancestor Portraits and Deity Prints,” co-curated by Wen-chien Cheng and Yanwen Jiang (the 2017–2018 J.S. Lee Memorial Fellow), visit ROM.on.ca