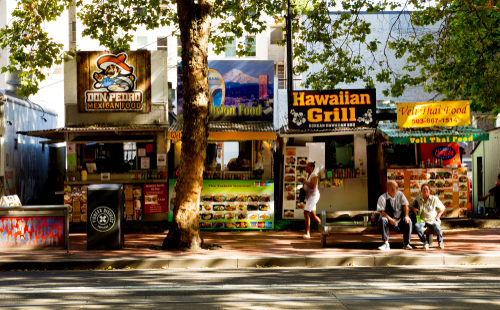 Portland, Oregon, ranked the country's best, wallet-friendly food city, is home to a variety of food trucks, among other delicious offerings. (Shutterstock)
Destinations

Personal finance site WalletHub has released a ranking of the country’s best and most affordable food cities, where home cooks and adventurous diners alike can fill their stomachs—without emptying their wallets.

The ranking compares the local food scenes of 182 U.S. cities, including the country’s 150 most populated, based on two key dimensions: “affordability” and “diversity, accessibility, and quality,” measured across 29 key indicators. Those indicators range from the cost of groceries and a restaurant meal to the number of eateries, farmers markets, food trucks, and food festivals per capita.

Portland, Oregon, takes the top spot in the overall ranking. Based on affordability alone, San Antonio, Texas, rises to number one; and when it comes to diversity, accessibility, and quality, New York City reigns unsurprising king.

Meanwhile, groceries are cheapest in Texas (the state is home to four out of the top five cities with lowest costs), and most expensive in Hawaii (Honolulu and Pearl City tie for highest costs).

For affordable beer and wine, Indianapolis offers the lowest prices, while Seattle boasts the highest—as well as the greatest number of craft breweries and wineries per capita, in a five-way tie with Santa Rosa, California; Portland, Oregon; Denver, Colorado; and San Diego, California.

Here are the top 20 cities in the overall ranking.