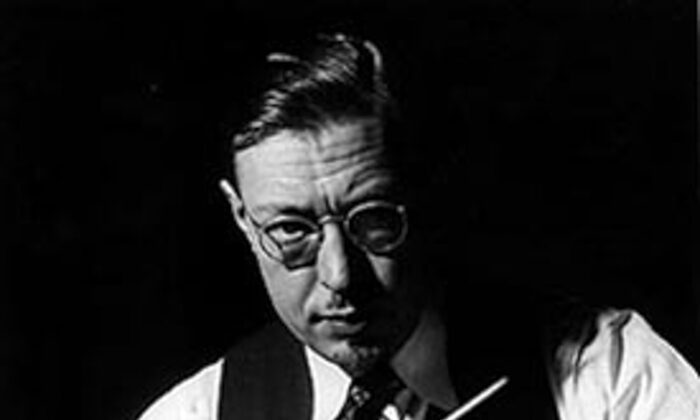 He wrote one of the most widely performed symphonies of the early 20th century but is virtually forgotten today. American composer Howard Hanson (1896–1981) was a self-professed Romantic whose works richly deserve to be revived and restored to global musical consciousness.

By “self-professed,” I refer to the title Hanson gave his Symphony No. 2, “Romantic,” which he composed on commission from the Boston Symphony Orchestra for its 50th anniversary. During the years he wrote it, from 1928 to 1930, Hanson was in the early years of a lifelong project: the directorship of the Eastman School of Music in Rochester, New York.

Hanson took the position in 1924, at age 28, after the inventor of Kodak photography, George Eastman, heard the Swedish-descended native of Wahoo, Nebraska, conduct his Symphony No. 1, “Nordic.” Eastman immediately knew this was the man to head his newly founded conservatory. While the prestigious position allowed Hanson to build one of the best music schools in the country, it also restricted his time to compose. Hanson’s catalog is strong, but it might have been larger.

A Melody Lives On

Despite the heavy administrative demands of kick-starting a school, Hanson somehow managed to compose the ambitious Symphony No. 2, a work in which melodies bloom naturally from initial harmonic gestures.

One of these melodies, introduced in the symphony’s first movement and cycled in some form throughout its two remaining movements, became, with repeated performances by dozens of orchestras worldwide, an icon of American Romanticism. Even if you don’t know it, you’ve likely heard it, thanks to director Ridley Scott incorporating it into the closing credits of his film “Alien.”

Ironically, by the year of “Alien’s” release in 1979, Hanson was old hat, ignored by an American classical music establishment that had passed him by for Modernism. Yet here was his 50-year-old melody heard by a new generation blissfully ignorant of Modernism. The piece gained new listeners and new life.

Writing in classical.net, Steven Schwartz says Hanson considered the “Romantic” Symphony “a manifesto of sorts.” That very well could be the case, as each subsequent Hanson symphony broadened the definition of “Romantic,” but never abandoned its core principle of increased expressivity through heightened values. Hanson’s procedure was classical—motifs and themes emerge out of harmonic structure—but his aim was intensely emotional.

The values heightened in a Hanson symphony are those of consonance and dissonance, textural complexity and release, and instrumental colors blended and contrasted. The emotional experiences include those of epic struggle in Symphony No. 3 (1938) and Symphony No. 6 (1967); the myriad facets of grief in his Pulitzer Prize-winning Symphony No. 4, “Requiem” (1943); the mystery of faith in Symphony No. 5, the single-movement “Sinfonia Sacra” (1954); and the oceanic majesty in his choral symphony on texts by Whitman, No. 7, “The Sea Symphony” (1977).

Except for a revival on compact disc by the Seattle Symphony Orchestra under conductor Gerard Schwarz in the early 1990s, Hanson’s symphonies have been almost entirely ignored since his death. The hegemony of Modernism has kept them out of the repertoire.

Modernism is the idea that all values are flat and interchangeable. Hierarchies must be minimized or eliminated altogether. In music, this means that consonance and dissonance, along with all other contrasting elements, collapse into mere sound for its own sake.

Igor Stravinsky lays out the Modernist creed in his autobiography: “Music by its very nature is incapable of expressing anything.”

Stanley Kubrick did precisely the latter in his film “Barry Lyndon,” using a Schubert funeral march for the wedding of the doomed hero, for the very reason that Stravinsky denies: When we hear the wedding music, we sense subconsciously that something is wrong, because the music expresses the opposite of joy.

Hanson, on the other hand, would have none of that. His early influences, Dvorak and Sibelius, exampled for him what music was all about. He knew the fire he was playing with every time he sat down to compose. Music not only expresses, it cannot by its very nature escape expression.

The portrayal of emotional experience in music is a big responsibility, for as Hanson once said: “Music can be soothing or invigorating, ennobling or vulgarizing, philosophical or orgiastic. It has powers of evil as well as for good.”