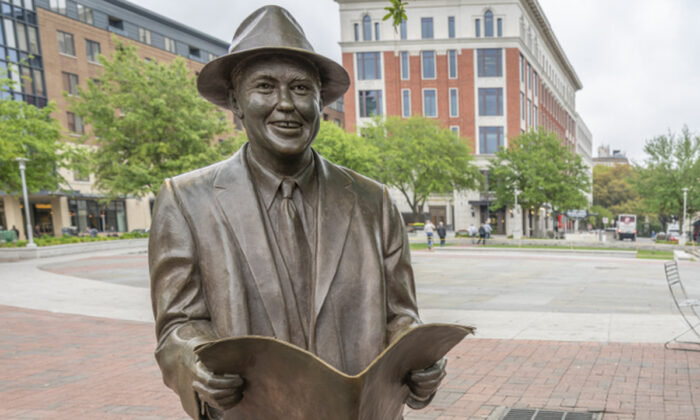 His words inhabit the psyche like a soundtrack of the American century, from the autumn leaves falling past my window to the Atchison, Topeka, and the Santa Fe. Johnny Mercer (1909–1976) was America’s lyricist, giving voice to the loves, ambitions, hopes, dreams, and whimsies of his country’s people for four decades.

A slim sampling of Mercer’s 1,500-plus song lyrics is a virtual history of the American popular song from the 1930s through the 1960s: “Lazy Bones,” “Hooray for Hollywood,” “Jeepers Creepers,” “You Must Have Been a Beautiful Baby,” “That Old Black Magic,” “One for My Baby (and One More for the Road),” “Ac-Cent-Tchu-Ate the Positive,” “Laura,” “Autumn Leaves,” “Glow Worm,” “In the Cool, Cool, Cool of the Evening,” “Satin Doll,” “Moon River,” and “Summer Wind.”

Not bad for a teenager from Savannah, Georgia, who hopped a boat for New York with little more than talent to his name.

A Boy From Georgia

John Herndon Mercer was born to a family whose fortune collapsed when he was 17, leaving him without the prospect of college or decent employment. He left for New York with the goal of becoming an actor, but when the entertainment industry discovered he had a voice, it made him into a singer.

Singing other people’s songs made him realize that he could do better, and in 1933, collaborating with Hoagy Carmichael, Mercer produced his first hit, “Lazy Bones.” From there he jumped to Hollywood and back again, commuting between the coasts to write for Tin Pan Alley, the movies, and Broadway.

The eclecticism of the songs in the list above—love ballads, crooner tunes, upbeat swing numbers, novelty songs of all stripes—owes partly to the range of composers whose tunes Mercer’s words accompanied, including Henry Mancini, Hoagy Carmichael, Harold Arlen, Duke Ellington, and Jerome Kern. But Mercer’s erudition and his ability to adapt to different imagined situations inside the music also played a role.

Take for example, “Laura.” You could say that it’s the title song of the 1944 movie, but you’d be only half right. The music, by David Raksin, was indeed composed for the film, but it remained lyric-less until the following year, when the tune’s popularity demanded words.  (Watch the movie and you won’t hear the lyric anywhere.) The challenge was to shape a lyric that fit both the rise and fall of Raksin’s melody and the image of the film’s title character: mysterious, distant, ideal. One wordsmith was hired and fired before the music’s publisher contacted Mercer. What the man from Georgia produced matched all the particulars:

Laura is the face in the misty light, footsteps that you hear down the hall,
The laugh that floats on the summer night that you can never quite recall.
And you see Laura on a train that is passing through. Those eyes, how familiar they seem.
She gave your very first kiss to you. That was Laura, but she’s only a dream.

The words are simple, direct, as if spoken. Only the rhymes give them away as a song lyric, especially the internal rhymes of light/night/quite. The lyric’s snug fit with Raksin’s tune makes it hard to believe they were written a year apart.

Though Mercer usually wrote words to the music of other composers, he sometimes penned his own melodies, which were as eclectic as his lyrics. Considering the quality of his three best-known tunes, it’s remarkable that he didn’t compose more: the faux-folkish “I’m An Old Cowhand (from the “Rio Grande”),” the richly lyrical “Dream,” and the swingin’ “Something’s Gotta Give.”

As a lyricist, Mercer reached a peak of sorts in his 30s, with such songs as “I’m Old Fashioned,” “Skylark,” “Come Rain or Come Shine,” “Blues in the Night,” “And the Angels Sing,” “On the Atchison, Topeka and the Santa Fe,” and “Laura.”

When he turned 50 he peaked again, this time with a string of hits written for the movies with composer Henry Mancini. First out of the chute was one of the most perfect popular songs ever created, “Moon River,” written for the film “Breakfast at Tiffany’s” (1961).

Semiautobiographical, the song’s famous reference to “my huckleberry friend” owes to Mercer’s memory of picking huckleberries in Georgia. It won that year’s Oscar for Best Song, as did Mercer and Mancini’s next effort, the title song to “Days of Wine and Roses” (1962). The team wrote more movie material, including the title song to “Charade” (1963) and “The Sweetheart Tree” for “The Great Race” (1965).

Mercer never gave up singing. In an age when songwriters and song performers were effectively two mutually exclusive groups, Mercer was a precursor of the singer-songwriter, with a popular following and hit recordings.

He also covered other people’s songs. When Disney released the movie “Song of the South” in 1947, it was Johnny Mercer’s version of “Zip-a-Dee-Doo-Dah” that reached the Top 10 of the popular charts. As if all this wasn’t enough, in 1942 Mercer co-founded Capitol Records, the first major record label on the West Coast, adding successful entrepreneurship to his list of accomplishments.

With fingers in so many pies, some areas of his profession lagged behind others. Mercer’s exposure on Broadway was limited to the modest hits “St. Louis Woman” (1946, music by Harold Arlen) and “Li’l Abner” (1956, music by Gene de Paul), plus some minor pieces.

Mercer’s list of film musicals, on the other hand, is lengthy and includes the iconic “Seven Brides for Seven Brothers” (1954, music by De Paul) and the Julie Andrews star vehicle “Darling Lili” (1970, music by Mancini).

For quality, quantity, and variety of lyrics, Mercer is matched in my opinion only by Oscar Hammerstein II. But Hammerstein focused on the theater, where his lyrics were driven by plot and character, whereas Mercer’s embrace of the total range of popular song allowed him to reflect the feelings, beliefs, and changing language of the country that made it possible for a penniless young man from Georgia to find fame and become America’s genius songwriter.