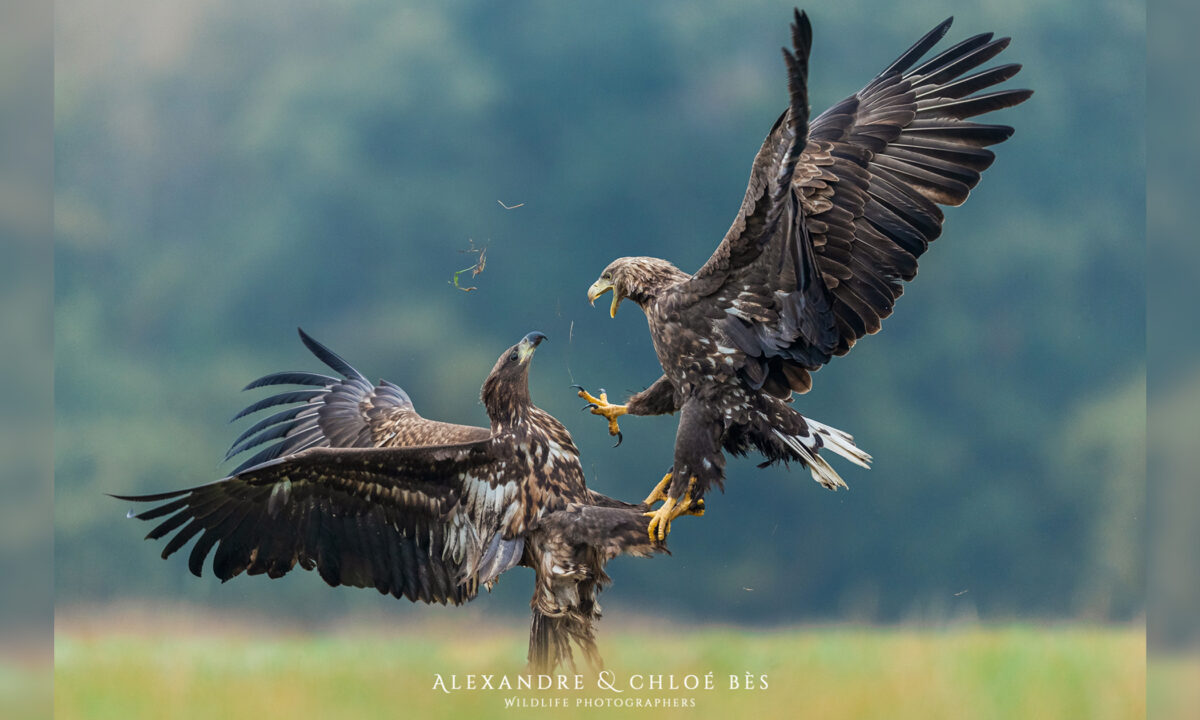 United by marriage and their deep passion for nature, animals, and photography, a couple from France has amassed a spectacular portfolio of nature photos. One particular series features a pair of white-tailed eagles in a midair battle over food, showing nature at its finest, and most fearsome.

Alexandre and Chloé Bès, both 29, are based out of Obernai in Alsace, France, and are professional photographers and videographers.

In October 2020, while Alexandre traveled solo to Poland, he was able to capture a series of incredible photos showing two white-tailed eagles fighting in midair.

“In combat, they use their talons to attack or their wings to strike when they are on the ground, but we have never seen a scene where they used their beaks,” he told The Epoch Times. “It is often the chest that is targeted, and with each impact … it is down that can be seen flying, but very rarely feathers.”

Sharing more details of the specific series, Alexandre said that he chose a hiding spot 15 meters away from the midair conflict, just before sunrise. He was blown away by the sight that unfolded, recalling: “I never thought I could observe such a surprising fight; nature offers us beautiful surprises!”

Posting the images on his Instagram account—which has received hundreds of likes—Alexandre wrote: “The fights are impressive and the light was perfect to capture these unique moments, an incredible memory that we share with great pleasure.”

This is not the first time he’s been presented with such a spectacular sight of the white-tailed eagle. During a March 2019 trip to the island of Hokkaido, Japan, where the couple had gone to produce a report on the local fauna, they were lucky to witness and snap an incredible photo of a white-tailed eagle, but this time landing with a fish in its talons on an ice floe.

“A wonderful scene to behold,” Alexandre said, referring to the image.

To shoot such images, one must always be attentive and understand animals’ behavior in order to film them well, said Alexandre, who currently uses a Canon 1DX Mark II camera with a Canon 400mm 2.8 II IS USM lens to take photos. For post-processing, he and Chloé use Adobe Lightroom.

The couple have been photographers for a few years now, and have traveled to numerous countries—including Scotland, England, Japan, Kenya, South Africa, Hungary, Poland, and France—to research different species, seasons, and photographic desires.

In 2021, the couple took a trip to Hungary for a report on birds and found a variety of hides from which to take their stealthy photos. Later that year, they traveled to Kenya’s Masai Mara reserve to photograph lions, cheetahs, and leopards, and were even surprised by two baby servals and their mother.

At the end of March 2022, they concluded a trip to a private reserve in Shamwari, South Africa, where they taught nine trainees the basics of wildlife photography while observing white rhinos, including two that fought under the rain in the middle of the savannah.

“A unique and memorable scene,” said the couple.

Chloé, an engineer by trade, started taking photos at the age of 24, to commemorate a trip to Bali, Indonesia, and her camera hasn’t left her side since. She gravitated easily toward nature photography, and what she loves most is to “slip into the intimacy of wildlife.”

Alexandre, formerly a technical manager, is self-taught in photography and “left everything” to devote himself entirely to being a photographer. He finds his equilibrium in nature, away from the hustle and bustle of daily life, and claims the secret to living at your own pace is patience and observation.

“Seize the present moment,” he said. “It only takes a moment for the magic to work.”

Alexandre started out by observing the animals around his home in France and fell in love with birds of prey during an unexpected encounter with a white-tailed eagle. Since then, he has traveled around the world to meet their cousins the sea eagle in Africa, and the Steller’s sea eagle in Japan.

Chloé also loves taking photos of birds, and action photography, which allows her “to show what is imperceptible to the naked eye when the subject is too fast.”

Both Alexandre and Chloé have held a special place in their hearts for Africa since childhood, so much so that they are planning to produce a photography book on Kenya and its biodiversity. Alexandre also offers guided trips into the heart of Africa’s wildlife to share his knowledge.

“We want to highlight the splendor of the wild world around us to arouse curiosity and emotion in the public,” the couple told The Epoch Times, imploring others, “Take an interest in nature, the environment, and animals! It is a fragile and fascinating universe that we must absolutely preserve.”

Share your stories with us at emg.inspired@epochtimes.com, and continue to get your daily dose of inspiration by signing up for the Inspired Newsletter at: https://www.theepochtimes.com/newsletter