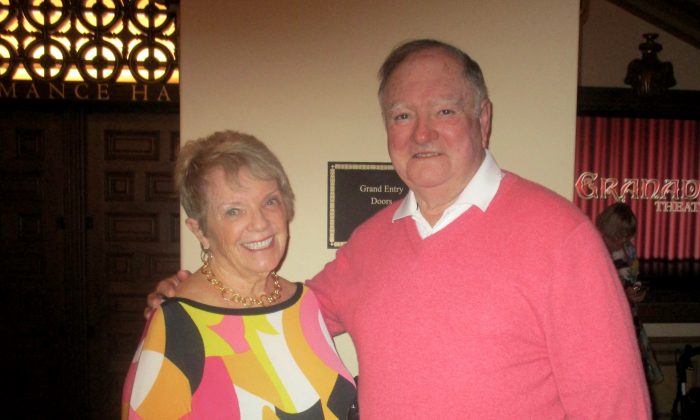 Don Haarer and his wife, Bethanne, could not imagine how Shen Yun could be as incredible as it was. The couple are now curious to learn more about the company, after watching Shen Yun Performing Arts at The Granada Theatre April 30, 2016. (Albert Roman/Epoch Times)

SANTA BARBARA, Calif.—Don Haarer and his wife Bethann were thunderstruck by Shen Yun Performing Arts and gave the performance a three minute standing ovation. For Mr. Haarer, it was “the most amazing thing that you could imagine and that certainly all of the advanced publicity on it was an understatement,” he said. “That’s what I think.”

Amazed, he asked himself, how in the world the company managed to combine all the elements with such exactitude, the backdrops, the music, the dancers. “It can’t be duplicated anywhere else,” he said.

Mr. Haarer, a retired legal counsel in the corporate world, and his wife, a retired teacher, drove to Santa Barbara’s The Granada Theatre from Newport Beach, a trip of about three hours, just to see the touring classical Chinese dance company. The couple took in the last matinee performance because they didn’t want to miss the chance to see it.

Shen Yun brings state of the art digital animation to live theater, with the foremost classical Chinese dancers in the world. The music accompanying the dancers is all original and played by an orchestra that folds Chinese instruments into a foundation of Western ones.

In trying to fathom the degree of perfection he’d seen, Mr. Haarer couldn’t help wondering how dedicated must these performers be to reach such a state, “because it was flawless.”

Important for Mrs. Haarer was the spirit of the performance that imbued it with love, spirituality, and a desire for freedom to practice one’s beliefs.

China, once known as the Celestial Kingdom, traditionally believed that culture was a gift from Heaven, and values that honor and revere the divine were upheld for thousands of years.

Carrying that tradition forward, New York-based Shen Yun treasures those values and shares them with the world, as they perform legends, literary tales and stories of courage from modern times, which all reveal light conquering darkness and righteousness overpowering evil.

Mr. Haarer wondered too, about the dark state of the world as opposed to what he saw onstage. “You sit there and you just think about that, how everything could be if everything could be as utopian, perhaps, and idealistic as this presented it. But that meant so much,” he said.

“What we saw today was an embodiment of ideals and hope that, I think all of us—it’s part of our being—that we hope it’s so,” he said.

Moreover, some of the dances tell stories of the persecution of people who practice Falun Gong in China—a spiritual path devoted to truth, compassion, and forbearance.

We know so little about Falun Gong from the media, Mr. Haarer said, yet the clear message he got was that the serenity and hope which Falun Gong seems to engender made him eager to know more.

“It brings home to us, too, how we have to be really careful and accepting of all people and their beliefs, and I thought that was another message in it,” Mrs. Haarer said.

“So we go home with more questions than we had when we arrived today and more of a sense of enjoyment,” Mr. Haarer said.