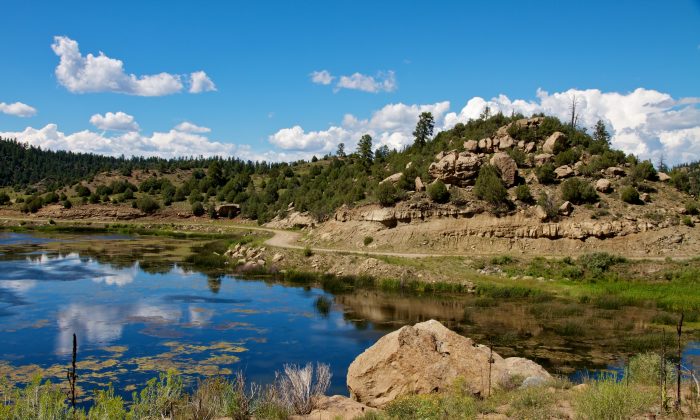 A file photo of Dulce Lake, N.M. Phil Schneider said he was working on a secret military base in Dulce in 1979 when he encountered aliens. (Christopher Nicol/Wikimedia Commons)
Beyond Science

Phil Schneider said he was working as an explosives expert, helping build secret underground bases for the U.S. government in Dulce, N.M., in 1979. In 1995, he told the astonishing story of his encounter with alien beings living underground.

Schneider said he was one of three survivors in a battle with aliens in August 1979 and that he was the only person with a high-level security clearance speaking out in such detail about the government’s knowledge of alien beings.

He was very critical of the government for keeping citizens in the dark, and gave many talks on his experiences in the two years preceding his death in 1997. Schneider claimed multiple attempts were made on his life after he began revealing what he knew. His death by suicide has been viewed with suspicion by his supporters.

Added April 10, 2014: There are few people from the military who have talked about aliens as explicitly as Schneider. All have been met with ridicule. But there are also many who believe Schneider after watching his videos, such as Veterans Today senior editor Gordon Duff who calls him a “UFO whistleblower.”

The Story of the Alien Base and Battle

Schneider was suspicious about the underground base he was helping to build when he saw so many Special Forces Green Berets around camp.

The work team drilled four large holes, the standard way to start construction. But what emerged from the holes was not at all part of standard procedure. “All the black sooty air came up when we drilled holes there,” Schneider said in a lecture at the 1995 Preparedness Expo. He had gone underground to make an assessment when he found himself just feet away from a “big grey”—a 7-foot-tall alien.

“The stench was worse than the worst garbage can. The entity was absolutely horrible,” he said. Schneider fumbled for a pistol he was carrying. He killed two of the beings, but not before one of them could emit a strange and harmful energy.

The alien made a sort of circular motion with his hand, waving it in front of his chest. Schneider imitated the action. “The next thing I know, this blue beam hit me and just literally opened me up like a fish.”

He showed the audience his hand. The beam burned off some of the fingers on his left hand and hit his chest. It also burned his shoes off and even burned his toenails off. A Green Beret saved Schneider’s life and lost his own in the process. He got Schneider into a lift and pushed the button to raise him above ground to safety.

More than 60 people lost their lives that day, said Schneider. The other two survivors are living in nursing homes in Canada, he said. They are protected by the Canadian government and no American citizen, Schneider included, is allowed access to them. Schneider said this is because they were scared of being kidnapped.

“There’s a war under there and it’s been going on since that time,” he said. He spoke of 1,477 underground bases around the world, 129 of which were located in the United States. Each cost $17 billion or more. He said the Black Budget, hidden from other U.S. government agencies and from the public, garners 25 percent of the gross national product. Military forces from multiple countries have been engaged in such warfare with aliens, he said.

Related Coverage
If the Universe Is So Big, Why Haven’t We Found Aliens Yet? (Video)

“We must instill in our public officials, they must tell us the truth,” he said. “If the truth cannot totally come out, what’s the use in us having anything called freedom?”