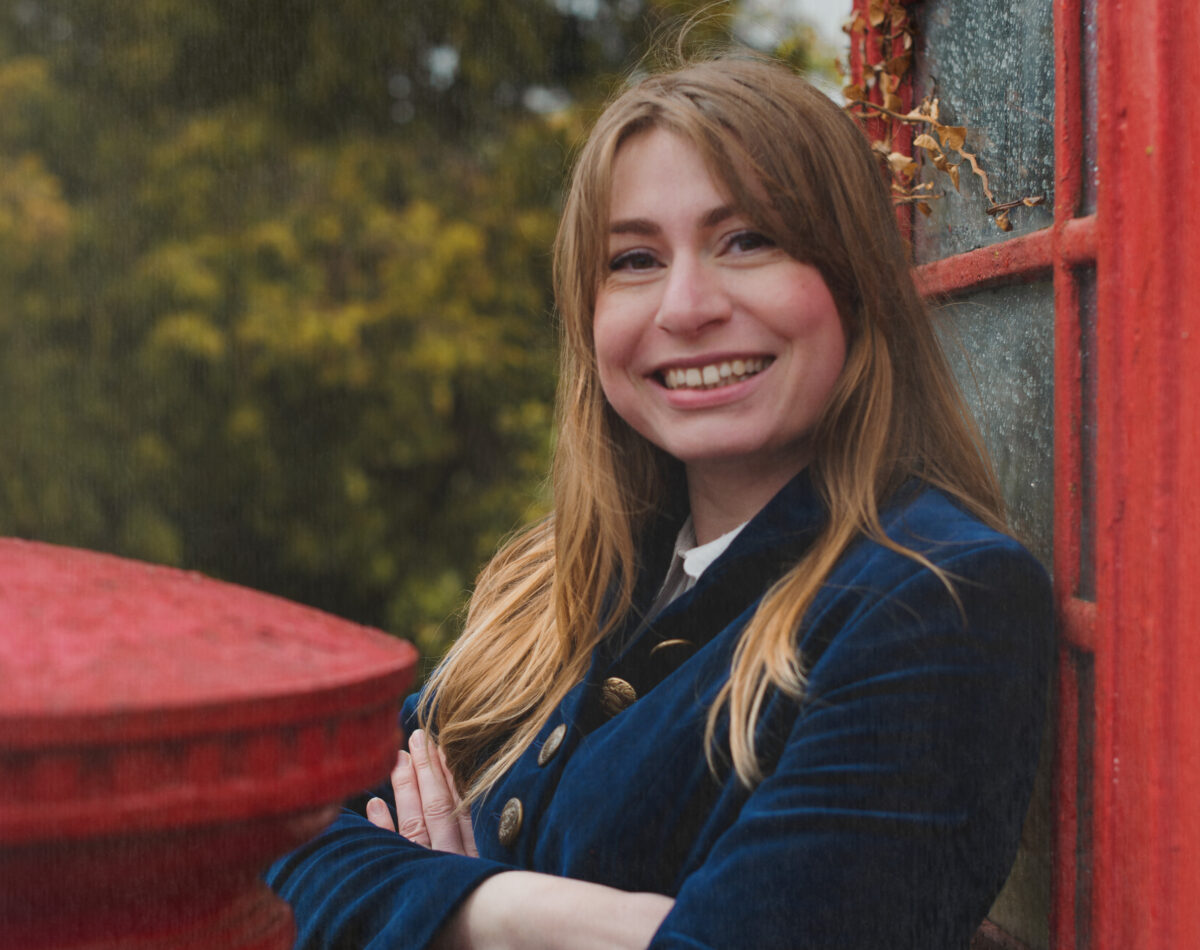 Based in the Cotswolds, U.K., Pettitt encourages women to be better homemakers, inspiring them through advice on housekeeping, marriage and family, and traditions. (Courtesy of thedarlingacademy/Instagram)
People

The danger posed by a marmalade-making, vacuum-wielding housewife apparently can’t be overstated—at least that’s the impression you might get if you were to scan headlines in U.K. media in the past couple of months.

When the BBC interviewed Alena Pettitt, a 34-year-old housewife from Gloucestershire, England, about what being a traditional wife means to her, the headline read “#TradWife: ‘Submitting to My Husband Like It’s 1959.’”

Despite the eye-catching headline, the coverage was fairly neutral: Pettitt spoke about her life and values as a housewife. Media reactions were swift; housewives who spoke up in favor of their lifestyles and traditional values were denigrated as “extremists” and as being “as misogynistic as men,” in one editorial published by the Independent; in The Guardian, links were drawn to the alt-right movement, with a final note that admitted that being a happy housewife did not equate to being a Nazi, but claimed nevertheless, “it’s time to dial down a notch, tradwives, for your own sake.”

So, what’s all this sound and snark about?

Well, to elaborate on Pettitt’s case, the mom and housewife runs a website called The Darling Academy, which delves into British lifestyle—good manners, homemaking tips (an entry on “Pressing Matters” is all about proper ironing), and old-fashioned recipes.

Her Instagram feed gives a peek into her life: flowers beautifully arranged in a vase in anticipation of spring; relishing a cup of Earl Gray tea and procrastinating before doing her least favorite chore, mopping; scones, cream, and jam (all so English!). It’s a snapshot of a warm home and the activities that go into its upkeep.

On her website, Pettitt writes: “It’s OK to want to be a good wife. It’s OK to want to make your husband happy, and it’s definitely OK to stand up and preserve the sanctity of marriage. 1809, 1909, 1959, 2020—it’s all the same. Women haven’t changed—society’s narrative has, but they too often spin lies to make us feel bad about living ‘differently’ from the norm.”

She got the message very young that being a housewife wasn’t exactly encouraged.

Pettitt points out that around age 11 or so, girls playing with dolls or at homemaking activities are expected to drop all of this. Contrast this to the experience of boys, who might stick with their love of race cars, video games, carpentry, or other masculine hobbies well into adulthood.

That’s because this is where expectations start coming in. For girls these days, their childhood toys are often replaced with the pursuit of fame, beauty, and popularity, Pettitt said. And, of course, career expectations.

She said that for 10 years, because of societal expectations, she suppressed her femininity and her desire to be a housewife, as she took on a career in marketing.

“It was survival mode for me,” she said. She worked in the beauty industry, in which the environment could be especially toxic and competitive.

It became too much.

She took off a year from work. During this time, she looked after the home, while her now-husband provided. They both loved the arrangement: she wasn’t stressed anymore, having the time to look after the home and after him. As they took on complementary roles, the stress and fighting in their marriage turned to fun and flirting.

“He’s better at making money and slaying dragons, and I’m a better cook, making small talk in the playground, and I actually enjoy the ironing—it’s a win-win. Plus, I adore that man! Why wouldn’t I want to spoil him?” Pettitt wrote on her website.

But others saw it differently.

“The outside world would shame us because, you know, I was [seen as] a freeloader and taking advantage of him, and he was foolish for supporting me. We still get that, funny enough,” she said. Now that her son is 7 and in school, she is expected to “go back to work”—that is, work as they see it.

“If I was going, for example, to the family next door and doing their housework and their cooking and being paid for it, that’s valid,” she said.

“We celebrate all of these women that are making great achievements in the working world and give them awards. But if I want to encourage women to be better homemakers … to be more efficient—because when they do that, they feel in control and have more sense of pride in the job—I’m apparently sending us back to the 1950s.

“We’re living in a world now where people hate the idea of homemaking, or homemakers, or housewives. There is a real prejudice towards that.”

Once ashamed, Pettitt won’t be bullied for her choice now. She believes it’s her calling to help women who were like her 10 years ago. In finding her voice—drawing attention, and sometimes ire, when speaking about all things housewifely—she has given confidence to other women who are, or who wish to be, homemakers or housewives.

“I’m raising my child myself and I’m creating this loving, nested environment where people come in and I get praised on my hospitality skills and making people feel welcome. And I love it,” she said.

Confidence for Women, Hope for Men

Many women have told her, “You have finally given me confidence in what I’m doing, and you are the only person who has validated what I’m doing.”

Husbands, too, are writing in. “I’ve had husbands email me on saying that their wives saw me on TV, and they’ve been depressed because they feel so devalued. But it was a glimmer of hope for them,” Pettitt said.

But perhaps the most surprising group of people to write in with supportive emails is young, single men—men who want to be providers, who say they want nothing more than to have a family and to find a woman who feels similarly about homemaking and raising children.

“They have hope again” to find a traditional wife—and have even asked her to set them up on dates, she said.

For women who are seeking to rediscover or reclaim their femininity, Pettitt advised finding and surrounding themselves with like-minded ladies. In a past age, women might have found female mentors in their own communities, but that’s not always possible.

“That’s the beauty of the age that we’re living in, because you might not find it on your doorstep and in your community. But you can find it online, which is exactly what I’ve had to do, because there’s no one who is like me in my social circle,” Pettitt said.

Pettitt also runs a YouTube channel, a Facebook page, and now a private Facebook group of about 700 women from all around the world, at different stages in their relationships. Unlike some online groups of traditional housewives, it has no religious or political bent.

Recently, a young mother asked to join, but told Pettitt she didn’t think she would get accepted because of her goth style. Pettitt wasn’t judgmental about it; she found it modest, just with darker colors than her own, a Morticia Addams to her Doris Day.

“How you look doesn’t qualify you as a homemaker and a traditional housewife. It’s about the position of your heart,” she said.

The Romance of It All

Pettitt describes her home life as a fairy tale—“in the sense of, I’ve got my lovely little nest [where] I put flowers in jars and pump up cushions.” And more than anything else, she gets to focus on the people she loves the most in the whole world.

The other day, she made marmalade, which she normally buys. Her family found it lovely.

“When I put that on the breakfast table, and I’ve made it myself, there’s a real sense of achievement and a real sense of pride,” she said. “Everything’s full of love and attention.”

She said she wouldn’t change her life for the world.

“To be ‘empowered,’ earning my own salary in a job that I’m really miserable in, in an office of 10 people that I couldn’t care less about and a boss that shouts at me because I’m five minutes late? No, thank you.”

Pettitt also said that as a result of managing her time well, she’s been able to pursue her passion for writing. She has written “Ladies Like Us,” a gentle guide on what it means to be a lady today, and “English Etiquette.”

“They took a while to do, but I’ve actually managed to achieve a lifelong dream in the process of living another dream,” she said.

Pettitt remembers that when she was growing up, her mom and most of her friends’ moms were busy working. There was no time to spend as a family because her mother would get home so late.

“It’s not like she had one job. She actually had two, because we haven’t laid aside homemaking and housework,” she said. “I remember seeing my mom spend the entire weekend doing the housework.”

The message these days that you can be anything and do anything is sold as empowerment, power, and happiness, Pettitt said. But not everyone harbors corporate ambitions.

“My husband and I, our ambition is to have a small home that has no mortgage, and free time to spend with one another and indulge in our hobbies. We are kind of urban homesteaders at the moment, but we would love a smallholding [a small farm]. And that’s it. You know, we don’t want to rule the world.”