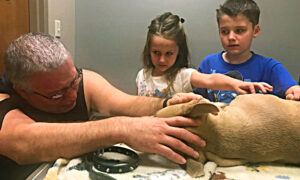 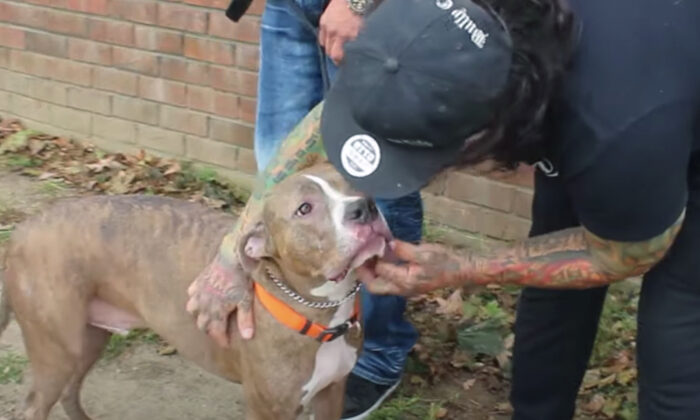 Diesel the pit bull had never been socialized and was kept in abusive conditions his whole life. When Craig Fields, the founder of the pit bull rescue organization New York Bully Crew, was contacted by the ex-girlfriend of the dog’s abuser, asking for help, he knew it would be an uphill battle.

Fields first met Diesel after he received a call on his hotline of an abusive owner, who had tried to surrender the dog at a shelter where he might be put down. The owner’s ex-girlfriend had sympathy for the neglected dog but couldn’t take him in her home as she already had two pit bulls.

However, New York Bully Crew has a lot of experience with rescuing “hopeless” cases, and they knew that, given some time and a lot of patience, they could reveal a diamond in the rough.

During Fields’s first meeting with Diesel, the scared dog lunged at him. “This dog is absolutely petrified of men, but petrified, aggressive,” Fields said in a video NY Bully Crew posted on YouTube. “[He] would have bit my face off if he didn’t have a muzzle on.”

The woman revealed that Diesel had been beaten by his abusive owner and left in his cage for such extended periods that he had peed on himself. In addition to this trauma, Diesel had never been socialized with children, or people on bicycles in busy public spaces, and had not learned how to meet new people.

All of this behavior had created fear and a lack of trust toward men. “[H]e is a bad dog, but that’s not his fault,” Fields said. “That doesn’t mean he’s not going to be good eventually, but he’s a product of his environment, and unfortunately his environment [expletive] sucked.” However, Fields wasn’t intimidated by the prospect of rehabilitating Diesel, telling the angry barking dog, “You’re going to love me in a week.”

The first order of business was to get Diesel comfortable with men and his surrounding environment. While most of the contact would be with female handlers at first, Fields’s rescue partner Joey was going to gradually try to win the dog’s trust. “A few times a day, what I’ll do is I’ll go visit him, give him a treat, try to get him to warm up to me,” Joey explained.

After building some rapport, the big goal would be daily walks. “Once I feel like I’m ready to take the muzzle off of him,” Joey adds, “then I can start his training, which is getting him to trust people, getting him to not respond the way he’s learned to respond.” While the rescuers knew that Diesel would be a tough case, Joey emphasized that “any dog can be worked with.”

Within just days of his new routine and loving environment, Diesel already showed some of the good spirit that had been locked inside. By day 8, Fields felt comfortable enough with Diesel’s progress to take off the muzzle on their daily walks. As he said in a video update, “With love, time, and patience, any dog can be fixed. No such thing as a broken dog.”

Soon, Diesel, who had been terrified of men, was “asking” to be petted by Fields, and by day 11, he was able to be walked alongside another dog.

As the weeks went on, Diesel learned lots of other necessary skills, including learning how to be less “owner possessive” and also how to share. With all of these skills in place, he would be ready to successfully live around other people and other dogs.

The crowning achievement of Diesel’s rehabilitation came on day 26 when, while on the leash being walked by Fields, he was able to be around a bunch of men without reacting aggressively at all—a stunning turnaround for a dog that had never been given a chance to shine.