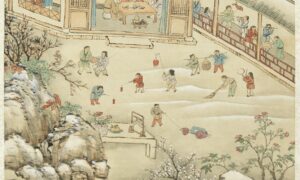 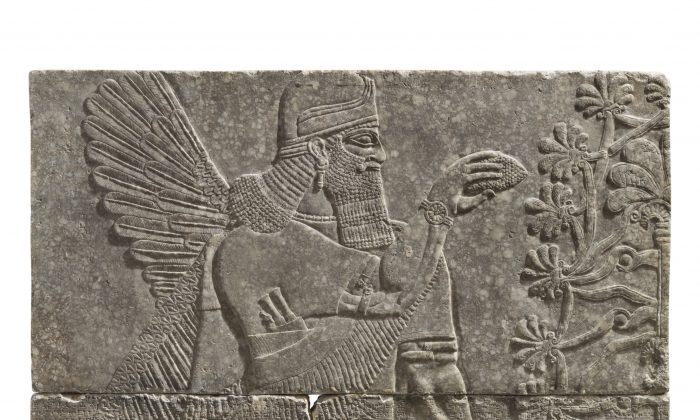 NEW YORK—The auctioneer has been smiling and now he speaks slowly. He knows the big moment has arrived.

There is a pause.

Then many people raise their hands.

His voice doesn’t echo, despite the high ceiling in the carpeted Woods room of Christie’s auction house in New York City. The auctioneer has been standing at the front of the room behind a podium and making broad gestures, pointing and talking for clarity to bidders and about a dozen staff who are connected over the phone to bidders.

Bidders are seated with paddles in rows. They are wearing suits, leather shoes, scarfs, leather jackets. Others bid online or are talking over the phone with staff seated at two long tables at either side of the room.

Throughout the morning at this antiquities auction, people have been bidding on Egyptian bowls and jars, Greek amphoras, Roman marble heads and torsos. The big ticket item is an Assyrian relief.

The relief, which is over 7 feet tall, isn’t in the room. Only five small items are displayed, under glass, between the bidders and the auctioneer. The relief’s photo is on a screen to the left of the auctioneer, which shows each item, one by one, as it’s being auctioned.

A screen on the right shows the current bid in several world currencies: U.S. dollars, euros, British pounds, Swiss francs, Japanese yen, Hong Kong dollars, Russian rubles, Chinese yuan. There is also a screen at the back of the room, which displays online bids for the auctioneer.

“At 11 million, on my left at the moment; 12 million, standing at the back. Gentleman’s bid at the back of the room at 12.” The numbers on the screen on the right update in all currencies.

The man at the back and someone over the phone, represented by staff member Laticia, now parry bids back and forth.

The relief is described on Christie’s website by G. Max Bernheimer, International Head of Antiquities at Christie’s in New York, (who is now taking talking to bidders on the phone): “These huge slabs of gypsum, sculpted in relief, were designed to impress and overwhelm. Every aspect was related to the strength and power of the king.”

Christie’s description on their website reads, “There are approximately 400 of these carved relief panels that would have filled the interior, which depicted narratives of Ashurnasirpal’s military triumphs, as well as animal hunts and courtly scenes.”

The auctioneer says, “Laticia has it at the moment at 24 million.”

The relief was brought back from Mosul, Iraq in 1859 by an American missionary, with others that had also been unearthed at the palace at Nimrud. This one has been at Virginia Theological seminary since 1859. Five other reliefs from the palace were sent to Bowdoin college in Maine and one of them is at the Metropolitan Museum of Art. Besides the Met, reliefs from Ashurnasirpal’s palace can also be found in the Brooklyn Museum, in Yale, and in about 60 other museums around the world.

The auctioneer draws out his next words, incorporating the quiet of the room into them.

The room is silent except for a camera clicking at the back and the rustle of clothing.

“Ashurnasirpal was a tyrant who ruthlessly expanded his kingdom,” Christie’s website reads, “conquering much of the ancient Near East including modern-day Syria and the land between the Tigris and Euphrates rivers—an area referred to today as ‘the cradle of civilisation.’ The palace reflected Ashurnasirpal’s newfound status as the most powerful ruler of the largest empire ever seen.”

“Holding at 24,” the auctioneer repeats.

Christie’s website also reads, “Without question, the relief offered at Christie’s on 31 October represents the finest example of Assyrian art to have come onto the market in decades.”

The auctioneer speaks with finality, preparing to complete the sale. “At 24 million dollars-”

“25,” says a man in runners and glasses who is standing at the back of the room.

Someone bids 26 through the phone.

“At 26 million I am selling to Laticia’s bidder, unless there’s a higher bid.”

“Two fifty” said the man at the back in runners. The auctioneer hesitated.

The man in runners and the buyer on the phone volley bids once more and it gets up to 27 million bid by the person on the phone.

The auctioneers hands are outstretched and he begins to announce, “at 27 million dollars…”

Then he stops and turns to the bidder at the back, “Are you sure, sir?”

The man at the back doesn’t bid.

“At 27 million-” the auctioneer begins to conclude again.

Then the man at the back bids.

The auctioneer starts his concluding tone, drawing out each word, “Standing at the back of the room … here in New York … at Christie’s … 27 million 250 thousand …”

Now no one is rustling. Even the camera is quiet.

Applause erupts and the rest of auctioneer’s announcement is hard to hear over the excitement as others congratulate the man who is wearing runners. He gives his paddle number to the auctioneer and slips out of the room.

This was the second highest price ever received for an antiquity at auction, according to Sara Fox, a senior public relations manager at Christie’s. The highest price was for a figurine of a lioness from about 3000 B.C. It was sold at Sotheby’s in New York in 2007 for $57,161,000.

The Assyrian frieze was sold on behalf of the Virginia Theological Seminary, in order to underwrite a scholarship fund.

The buyer has chosen to remain anonymous.