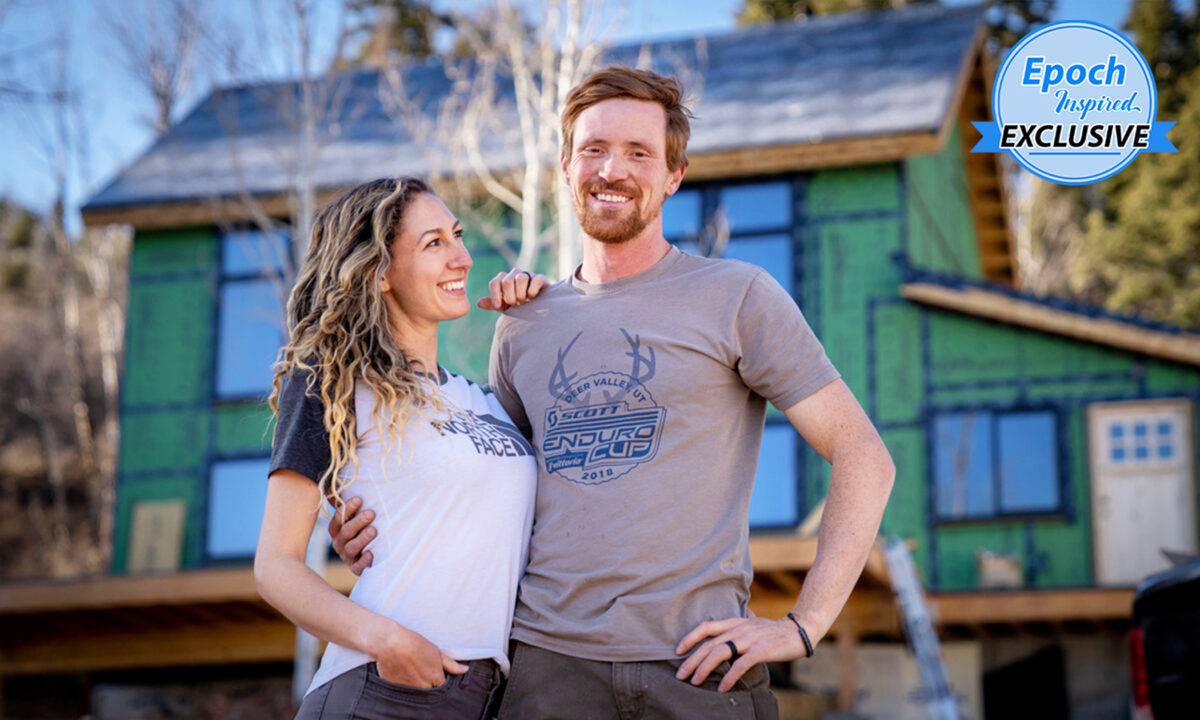 After 3 Years of Van Life, Couple Buys Land and Builds a Dream House in the Mountains

After a short trip in their self-converted van turned into three years on the road, and a once-in-a-lifetime journey to the southernmost tip of Argentina, a Utah couple decided to put down roots. They bought a piece of land in Utah and built their very own tiny cabin in the woods, just in time to welcome their first baby.

Trent, 35, and Allie, 31, fell in love with the minimalist lifestyle while on the road.

“We found that forcing yourself to pare down physical items allows you to focus more on the world around you: the communities, cultures, cuisines, and beautiful landscapes,” they told The Epoch Times. “We knew we wouldn’t be able to travel forever, and that if we wanted to explore we needed to take a leap of faith.”

After a trip to Mexico with friends in December 2018, they took the plunge, driving the Pan-American Highway to its end over 18 months. They reached Ushuaia, the furthest landmass of Argentina’s Patagonia region, which is just a short boat ride to Antarctica.

“We traveled through 16 countries,” they recalled, “learning Spanish along the way, making some of the best friends of our lives, navigating government regulations and rules as we transported our dog, Frank, with us across each border … and even stuffing our van into a shipping container and shipping it from Panama to South America to continue exploring.”

Through their journey, the couple learned to rely on each other, surviving complicated border crossings, the rocky, steep dirt roads of small indigenous villages, flat tires, attempted break-ins, and filling up water jugs in bubbling mountain springs. They made a pact: if either of them ever wanted to quit, the others would respect their decision.

Yet neither Trent nor Allie pulled the plug and in the process got the opportunity to experience a lot. Their adventures involved hiking up active volcanoes in Nicaragua and Chile, kayaking crystal clear cenotes in Mexico, swimming with sea turtles and sharks on the beaches of Belize, and learning to salsa in Colombia.

Living in a van for a long time with someone can either make or break a relationship, Allie reflected, claiming: “You learn to choreograph your life with the other person, and tango together, rather than stepping on each other’s toes. We had a strong relationship before, but this type of intense and high-consequence travel brought us even closer together.”

After visiting indigenous archeological sites all over Central America, Trent proposed to Allie on top of a Mayan pyramid in Tikal, northern Guatemala.

When the world shut down amid the pandemic in March 2020, the couple were in their van in Buenos Aires, over 6,000 miles from home. They made the heartbreaking decision to abandon their tiny home on wheels and take a repatriation flight back to the United States before international borders closed.

Having taken sporadic trips to Utah to see family between their travels, the couple had had the foresight to start planning a “home base” for the future. They had bought a small plot of land in the mountains of Utah; returning home, their timeline was accelerated.

While back at home, they also got married in a small intimate ceremony.

In September 2020, the couple took over 100 percent of the building, alongside Trent’s childhood friend, Branden. Allie claims doing so saved them “a ton of money,” since prospective quotes from home builders and general contractors during their planning stages totaled $420,000.

What they had loved about van life was living in the great outdoors. As such, the couple planned to continue living in a small-scale home with the expanse of nature around them.

“We started out wanting a tiny home with an open layout concept and minimal infrastructure,” they explained. “Because of the intense climate where our property is located at about 8,000 feet elevation, our engineers required us to reinforce the house to a seemingly industrial level to accommodate the average yearly snow load. It worked out well in the end, and we have a very energy-efficient house through the open floorplan, a wood-burning stove, and diligently insulating both the interior walls and exterior of the house.”

Describing building the house as “a marathon,” Trent and Allie hired a general contractor named Kevin as their consultant after working with an architect and structural engineer. Kevin became a mentor, advocate, lifelong friend, and trusted source of information.

The project was not without challenges. The biggest, the couple conceded, were learning each trade skill from scratch and trying to uphold high-quality standards the whole way through.

Every time they tested the drain system, they found a leak—”I think we plumbed the entire house 2.5 times,” Allie recalled—and building through the snowy winter meant delivery trucks could not access the steep, slippery roads to their plot.

But the couple plowed on, transporting every building item to the property themselves.

Trent and Allie also recorded their progress, problems, and perennial positivity on camera, eventually uploading time-lapse footage of their epic house on YouTube.

They told The Epoch Times: “After a year of long, brutal hours of hard labor, multiple attempts to learn, fail, and re-learn each trade, spontaneously eloping, adding another puppy to our family, living in a camp trailer on our property through the harsh winter at 8,000 feet of elevation with 8 feet of snow, and becoming pregnant, we finally passed every single legal inspection.”

The couple learned that Allie was expecting a baby at the peak of the building process. The family earned their certificate of occupancy in November 2021, a week after baby Leo Anthony was born.

“He made his appearance 3.5 weeks early,” said Allie. “It was my birthday, Nov. 3, and we were just finishing up a delicious homemade dinner and a movie, and getting ready for bed, when I started to feel undeniable, consistent, and increasingly painful contractions … at 3.26 p.m. the next day, after a smooth and overall positive labor and delivery experience, our son was born.”

Leo suffered a health crisis at four days old and was rushed by helicopter ambulance to the hospital, but he pulled through. His resilience and stubbornness, said Allie, are “so like his father.”

“He’s healthy and thriving now,” she said, “and is a daily reminder to live in each moment and never take anyone, or anything, for granted. I secretly believe he decided to show up a few weeks early because he wanted to be there for the final inspection on the house, to share in that incredible moment with us!”

Today, the couple post bi-weekly updates on their YouTube channel and love to engage with their viewers in the comments section. Their shared goal is to show parts of the world to those who are scared to travel, or can’t, and reveal the humanity and love that exists across all cultures.

“Now we’re more stationary, but our goal is still the same,” they reflected, “to show the humanity and love in the mundane, and that it’s never too late to follow your dreams, to live outside the box, and to try something new.”