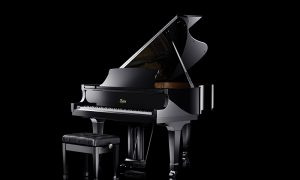 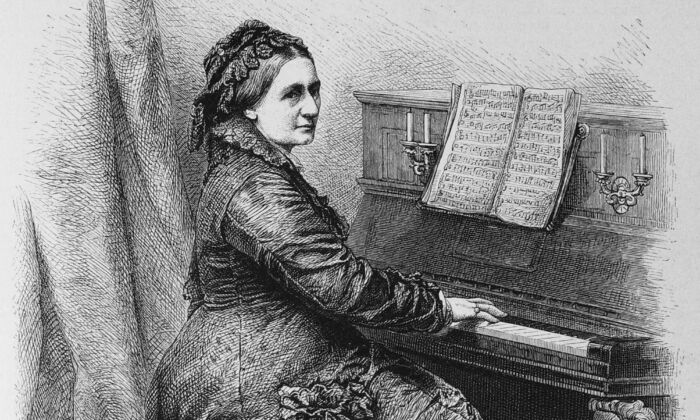 Clara Schumann had an exceptional 60-year career as a pianist. Here she's illustrated at the piano in The Garden Arbor journal, 1888. (Public Domain)
Performing Arts

A life of love, loss, marriage, and above all, music
By Lorraine Ferrier

September marks the 200th anniversary of the birth of Clara Schumann, a woman well known to musicians, but perhaps less known to most of us.

The 19th-century German pianist Clara Schumann (1819–1896) is foremostly remembered as an exceptional pianoforte performer. In 1830, at the age of 11, she made her concert debut with the famous Leipzig Gewandhaus Orchestra conducted by Felix Mendelssohn—a great start to an illustrious career that spanned some 60 years. Clara’s final public performance was in 1891, when she was in her 70s.

Clara’s life was full. Besides being a pianist, she was a celebrated composer, piano teacher, and music editor. Married to composer Robert Schumann, she mothered their eight children, as well as edited, arranged pieces for piano, and then performed her husband’s compositions. After his death, she continued to contribute to his legacy.

Her marriage to Schumann was full of mutual admiration, love, and loss. Four of their children died before she did. One of her sons suffered mental health problems. And all along, Schumann struggled immensely with his own mental health. Clara was resilient throughout her life and seemed destined for musical fame.

Clara was born on Sept. 13, 1819, in Leipzig, Germany, to Friedrich and Marianne Wieck. Clara’s father was a sought-after piano teacher who owned a piano and sheet music store, and her mother was a famous pianist and soprano. Although Clara had two brothers, she was singled out for stardom by her father at an early age.

For the first four years of her life, Clara didn’t utter a word; her parents presumed she was deaf. Clara didn’t respond to words and seemed completely consumed by her own inner world. Yet music moved her. At 5 years old, her father taught her music by ear. She wasn’t deaf at all; she responded to music but not speech.

Clara’s musical education was exceptional. Her father taught her until she was 19 years old; he employed the best music teachers when he couldn’t teach her himself. In addition to learning piano and the foundations of music, Clara learned violin, composition, harmony, and orchestration to name a few subjects, and even how to run a music business. Her father took her to see every important drama, opera, and concert in Leipzig.

But her father also had a domineering character and was prone to angry outbursts. Clara reflected on his teaching methods in a letter just two years before she died: “He reprimanded me when I deserved it, and in so doing, prevented me from becoming arrogant from the praise the world showered on me.”

At 11 years old, after her successful concert debut with the Leipzig Gewandhaus Orchestra, Clara’s father took her on tour to France, Germany, and Austria. After a series of performances in Vienna from December 1837 to April 1838, the 18-year-old Clara was awarded Austria’s highest musical honor: the Royal and Imperial Chamber Virtuoso.

Robert Schumann became Friedrich Wieck’s live-in pupil when Clara was 11 years old. Musical admiration turned to love after Clara’s 16th birthday. From the outset of their romance, Wieck was against their courting, and he went to great lengths to prohibit their marriage, but to no avail.

Schumann and Clara married a day before her 21st birthday. Schumann bought Clara a joint diary for her 21st birthday, where they would each journal about their day. It was a tradition they kept for several years.

Their marriage appears to be one of mutual respect and devotion. As was the tradition of the time, Clara yielded her career to their marriage.

“I will make you forget the artist, because the wife stands even higher than the artist,” Schumann wrote to Clara before they married.

Clara’s presence can be felt throughout Schumann’s work; he inserted many of her musical quotations in his own works, and she arranged many of his pieces. He also secretly published songs he’d encouraged her to compose, and presented them to her on their first anniversary.

Clara was also the first to play each piece of music that Schumann composed, because he was unable to, much to his frustration. “An evil fate has deprived me of the full use of my right hand, so that I am not able to play my compositions as I feel them,” he said in a letter to the landowner and music dilettante Simonin de Sire.

Schumann put his disability down to having been overzealous with playing or writing music. He also had syphilis, which would explain his bouts of melancholic madness.

Schumann’s debilitating bouts of depression meant that Clara had to manage the household and also make money. “You are my right hand and you, you must take care of yourself, so that nothing happens to you,” Schumann wrote to Clara.

In 1854, he committed himself to an asylum where he died two years later.

Widowed at 37 years old, Clara took to performing concerts around the world, to provide for her children and grandchildren. She never composed professionally after Schumann died but continued to edit and play his music.

“Performing the art is a big part of my life, it is the air that I breathe!” she wrote to Brahms in 1868.

In 1878, Clara was appointed as a piano teacher at Dr. Hoch’s Conservatory in Frankfurt until 1892. She died in 1896, teaching music right until the end. Her husband’s F-sharp major romance was the last music she heard, played by her grandson Ferdinand, at her request.

Not only did Clara Schumann influence her husband’s work, but she also inspired the composer and close friend Johannes Brahms and also the violinist Joseph Joachim, who accompanied her in chamber recitals.

Piano performance was never the same after Clara Schumann. She performed without accompanying musicians, unusual at the time (although Liszt did this too). In her later performances, Clara presented a balanced repertoire of 18th- and 19th-century music including that of J.S. Bach, Domenico Scarlatti, Beethoven, and Schubert, which was at odds with the normally showy compositions and improvisations often performed in the Romantic era.

She was a core part of the so-called War of the Romantics, a turning point in classical music whereby musicians were divided. Composers such as Liszt and Wagner saw Beethoven as the start of a new kind of music. Clara,‍ along with Brahms, Joachim, and the Leipzig Conservatory believed that Beethoven’s music was the pinnacle of classical music perfection.

Clara Schumann, considered one of the greatest pianists of her time, used her talents to serve those she loved. Throughout all the trials and tribulations she endured, she respected her father and his strict classical training, she doted on her husband despite his mental illness, and she supported her children while furthering her husband’s legacy. In Robert Schumann, she found not only a husband but also a constant source of inspiration: peer to peer, husband to wife.

Perhaps the two complemented each other perfectly. One wonders what kind of musician either of them would’ve been without the other.