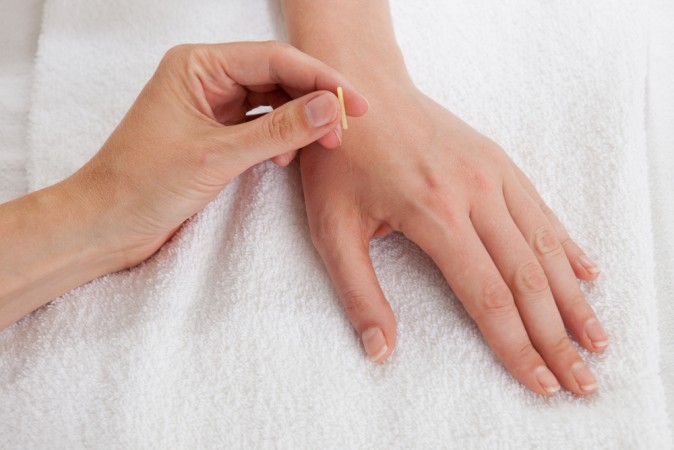 Acupuncture: Real or Not, Can Ease Side Effects of Cancer Drugs

Every year, millions of Americans turn to acupuncture as part of their health care routine, using it to relieve chronic pain, high blood pressure, nausea and much more. Although in the US, acupuncture is considered an alternative to conventional forms of medicine, it is actually one of the oldest healing practices in the world.

In China, Japan, Korea, and other Asian countries, acupuncture has been used for thousands of years, and its staying power isn’t merely a matter of superstition or coincidence.

Acupuncture has withstood the test of time because it works to safely relieve many common health complaints. And, interestingly, one recent study even showed that not only does acupuncture work, but so, too, does a sham acupuncture procedure…

It turned out that both sets of patients reported significantly improved symptoms, especially among hot flashes. This included those who had received either the real or sham acupuncture.

This could certainly be a demonstration of the placebo effect in action, although the researchers also suggested that the slight pricking of the skin involved in the sham procedure may have caused physiological changes. Either way, if it works to make you feel better, does it really matter why? As Dr. Ting Bao, the study’s lead author, stated:2

“Acupuncture as a medical procedure has been practiced for thousands of years… It has a minimal risk and potentially significant benefits.”

How Does Acupuncture Work?

With documented use dating back more than 2,500 years, acupuncture is based on the premise that there are more than 2,000 acupuncture points in the human body, which are connected by bioenergetic pathways known as meridians. It is through these pathways that Qi, or energy, flows, and when the pathway is blocked, the disruptions can lead to imbalances and chronic disease.

The treatment itself, which involves the insertion of metallic hair-thin needles (typically three to 15) into specific acupuncture points, can be conducted by a physician or a trained acupuncturist. It generally involves little or no discomfort, and patients often report feeling energized or relaxed following the procedure.

Acupuncture is proven to impact a number of chronic health conditions, and it’s thought that it stimulates your central nervous system to release natural chemicals that alter bodily systems, pain and other biological processes. Evidence, in fact, suggests that acupuncture impacts the body on multiple levels, including:3

However, chronic pain is only one of 30+ proven uses for this natural treatment. The World Health Organization (WHO) conducted an extensive review and analysis of clinical trials related to acupuncture, and reported the procedure has been proven effective for the following diseases:5

There Are Many Different Types of Acupuncture: You Choose What Works Best for You

The term acupuncture is often used to describe all of these modalities, as each has shown similar benefits. This means that if you like the idea of trying a natural, ancient technique like acupuncture, but don’t like the idea of having needles inserted into your body, there are needle-free alternatives you can try that can offer many of the same benefits.

In one study that evaluated acupuncture for cancer patients suffering from nausea during radiotherapy, one group received traditional acupuncture with skin-penetrating needles while a second group received simulated acupuncture with a blunt placebo needle that only touched their skin.6 Interestingly, 95 percent of the patients in both groups felt that the treatment helped relieve nausea, and 67 percent experienced other positive effects such as improved sleep, brighter mood, and less pain.

My favorite form of “needle-less acupuncture” is The Emotional Freedom Technique, or EFT, which is the psychological acupressure technique I most highly recommend. EFT is based on the same energy meridians used in traditional acupuncture to treat physical and emotional ailments but without the invasiveness of using needles, nor the inconvenience and cost of having to have a practitioner available to treat you.

Instead, simple tapping with the fingertips is used to input kinetic energy onto specific meridians on your head and chest while you think about your specific problem — whether it is a traumatic event, an addiction, pain, etc. — and voice positive affirmations. This combination of tapping the energy meridians and voicing positive affirmation works to clear the “short-circuit” — the emotional block — from your body’s bioenergy system, thus restoring your mind and body’s balance, which is essential for optimal health and the healing of physical disease.

You can conduct EFT yourself, but if you are not getting the results you would like, or you have a particularly traumatic issue, consider consulting with a skilled EFT professional. Likewise, if you decide to give traditional acupuncture a try, be sure you consult with a qualified practitioner, as your results may vary depending on the practitioner’s skill level.

*Image of “acupuncture” via Shutterstock