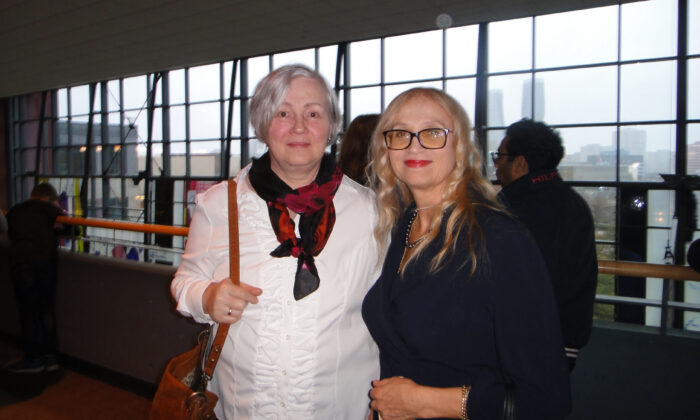 MISSISSUAGA, Canada—Shen Yun Performing Arts attracts and inspires elite artists wherever it goes. Tonight, acclaimed mezzo-soprano Margaret Maye attended a performance by the New York-based performing arts company at the Living Arts Centre and was excited to hear and see one of China’s traditional and ancient singing techniques, one that was almost lost.

“It was excellent, excellent,” said Maye, who has performed with Canada’s Summer Opera Lyric Theatre, Toronto Operetta Theatre, Opera in Concert, and Opera Mississauga, and is known internationally for her wide-ranging vocal ability.

“We are enjoying the show, its beautiful costumes, wonderful choreography, and beautiful music, the instruments, original instruments that we really appreciate,” said Maye, who attended the performance in Mississauga with a guest on Jan. 11, 2020.

Originally from Poland, Maye was awarded the Order of Merit (“Zasluzona na polu szerzenia kultury”) from the Ministry of Culture of the Republic of Poland in recognition of her artistic achievements. The Lieutenant Governor of Ontario and Canada’s National Ethnic Press and Media Council awarded her for her contributions to her Polish community and to Canadian society as an artist, philanthropist, and humanitarian.

Maye brought her highly-trained and impressive artistic experience to bear while she took in Shen Yun’s dance pieces and songs.

According to the website, the technique is “believed to produce the most beautiful and pure tone of voice … only Shen Yun’s singers are now again using this traditional and ancient technique on the modern stage. Their ability to perform bel canto while retaining perfect Chinese diction is likewise unparalleled.”

“Old traditions—that’s interesting to see, and to hear, and to watch,” Maye commented after asking about the rare quality she heard in the Shen Yun soprano’s vibrato.

Maye commended what she saw as one of Shen Yun’s messages, “about the oppressed people in China,” and described Shen Yun artists’ unique and spiritual stage presence.

“The dancers and performers are carrying inside some light of enlightenment, I would say, or something inside of them that shows in their art,” she said, adding that that energy is passed to the audience.

Shen Yun artists’ notable energy, lauded by many of the world’s top performers and professionals, is by design. In an effort to restore true, traditional Chinese culture to the world, the performing arts group incorporates meditation, moral improvement, and self-refinement into their daily lives the way their ancient predecessors did, who credited the divine for the wisdom and innovations they achieved. Shen Yun artists practice Falun Dafa in particular, a spiritual practice that teaches truthfulness, compassion, and forbearance. They are not allowed to perform in China today due to a violent and lethal persecution against this and other spiritual practices perpetrated by the country’s communist regime.

Shen Yun dancers’ inner quality is not the only thing that the veteran stage performer picked up on; the performers’ classical Chinese dance technique also caught her eye.

“They are excellent, perfection, and very gracious,” Maye said.

With reporting by Dongyu Teng and Brett Featherstone.