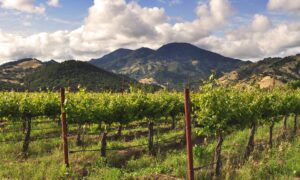 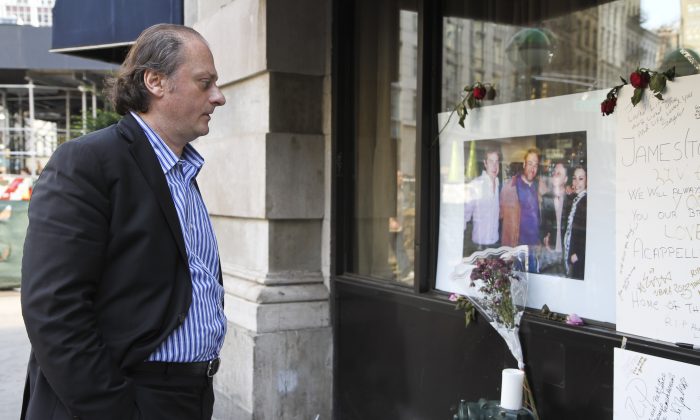 Sergio Acappella looks at a shrine set up for the late Sopranos actor James Gandolfini outside of his Tribeca restaurant on June 24. Gandolfini was a regular at Acappella. (Amelia Pang/Epoch Times)
Food & Dining

NEW YORK—It began with a mysterious phone call to Sergio Acappella 17 years ago at his namesake restaurant in Tribeca.

The voice on the line asked if he would consent to having his upscale Northern Italian restaurant used to film scenes for a pilot TV episode.

“I said ‘I don’t know, you’re not going to shoot anything crazy, are you?’ That’s every restaurant owner’s worst nightmare,” Acappella, 52, chef and owner of Acappella Restaurant recalled on June 24.

The person on the other line said a location manager had eaten at Acappella a few times and decided it was the perfect setting for a television series about a troubled New Jersey mobster who is seeing a psychiatrist and has a family of ducks in his pool.

Or at least, that is what Acappella remembered from the phone call.

“I said, “This is crazy, crazy.” But then I asked how much money they were offering and that was it, he joked.

Little did he know that the restaurant would become the setting for the series premiere of “The Sopranos,” a drama that later won 21 Emmys and five Golden Globe Awards. But above all, it was the start of a lifelong friendship with Sopranos star, the late James Gandolfini.

The actors worked 14 to 16 hours a day to film the scenes in the restaurant alone. Conflicts arose. During the 58th take, Acappella told them to stop filming.

“To my surprise, the show really took off,” Acappella said. “At that time, I really didn’t know. In fact, none of them even knew how big of a hit it was going to be.”

Of course, before the cast and crew of “The Sopranos” left, differences were sorted out over some good pasta and grappa, Acappella added.

In fact, the large and magnificent Italian Renaissance-era painting of Duke Federico da Montefebre of Urbino hanging in the back of the restaurant was a gift and comes from the set of “The Sopranos.”

Master chef Acappella did not need 58 takes to concoct a flawless dining experience.

This was proven in the execution of the restaurant’s iconic dessert—flambé.

“Some people no longer make flambé because it takes too much time,” Acappella said. “But all I have is time, time to give, to make sure people have a nice time.”

“Flambé is what I grew up with, it’s what I brought with me from home,” he said. “It is necessary to take the time to make it right.”

The exquisite dessert consists of raspberries, lemon zest, and orange juice, all lightly melted together when a slew of lighted alcohol is poured over it, creating a savory sauce that tops the fine vanilla ice cream and sliced strawberries.

The restaurant offers your choice of brandy, cognac, or rum for this dessert.

The flambé is made at your table on an elegant white-clothed cart holding the ingredients and a large pan.

When the alcohol is poured into the pan, a breathtaking horizontal whirl of flames flares up. Acappella said once, many years ago, the waiters got a little carried away during practice and made the fire so high the sprinklers went off.

“So now we limit the height of the fire to seven feet,” he said. The distance from floor to ceiling is 16 feet.

The strawberry flambé was a more than gratifying experience for both the eyes and the taste buds—it is delicious.

But that is only one beautiful detail about Acappella.

Each table is decorated with a fresh rose and a bottle of Chianti.

Acappella’s staff carries itself with a professional demeanor that gives the restaurant a serious yet lively aura. Waiters refill glasses the moment they are empty; they rush to pick up a dropped napkin.

And they will also sincerely share a laugh with you.

Remembering Gandolfini and His Favorites

Acappella has a policy: He won’t disclose which living celebrities dine at his restaurant.

When Gandolfini passed away on June 19, Acappella set up a shrine outside his restaurant to pay respects to his longtime friend and customer.

Acappella said that ever since the first episode was filmed, Gandolfini would return to the restaurant every couple of months. The late actor would usually leave it to Acappella to decide which dish he should try.

“James was a fun guy to be around with,” Acappella said.

The pastas are creatively served in three sections on the plate, each distinctively different from the others.

Acappella uses seasonal ingredients so the dishes vary from time to time.

He also personally travels to Maine to pick up the freshest seafood, often arriving back at the restaurant by 5 a.m.

He said he only buys female lobsters because their meat is tenderer.

There is a pleasant hint of spiciness, which goes well with the mild, sweet taste of fresh lobster.

Another feast for the eyes: Frank Gjonbalaj finishes the cooking in front of you, slicing the freshly boiled lobster with grace and lightly frying the lobster in a stainless steel pan.

“It’s a very old pan, although it looks new,” Gjonbalaj said. “In my opinion, age breaks the pan in. The older it is, the better it tastes.”

He sprinkled fresh parsley, oregano, and basil, and shook the pan, swirling the contents with grace and precision.

Acappella also has an extensive wine list with an impressive selection of Italian wines.

A complimentary glass of grappa is offered after dinner at your table or at the mahogany bar.

Acappella and His Team

After starting several restaurants, Acappella settled down with his restaurant in Tribeca nearly 20 years ago. The master chef began working in fine Italian restaurants at age 12.

“[Acappella Restaurant] is my home, this is where I come home to sleep, that’s how much I love this place,” he said.

Acappella is the chef, but he also takes the time to teach each of his 32 wait staff how to cook according to his standards.

He said it is important to him that his waiters have a thorough understanding of the essence of each dish.

“They have to know how to cook before they talk to the customers,” he said. “All of them, they know where each ingredient comes from.”

Acappella said most of his employees have been working with him for 14 to 19 years.

Acappella stepped outside to look at Gandolfini’s shrine at the side of the restaurant. A row of roses lined the ground.

He took a look at an old group photo hanging outside, picturing him and Gandolfini, next to a board with signatures and messages from passing fans.