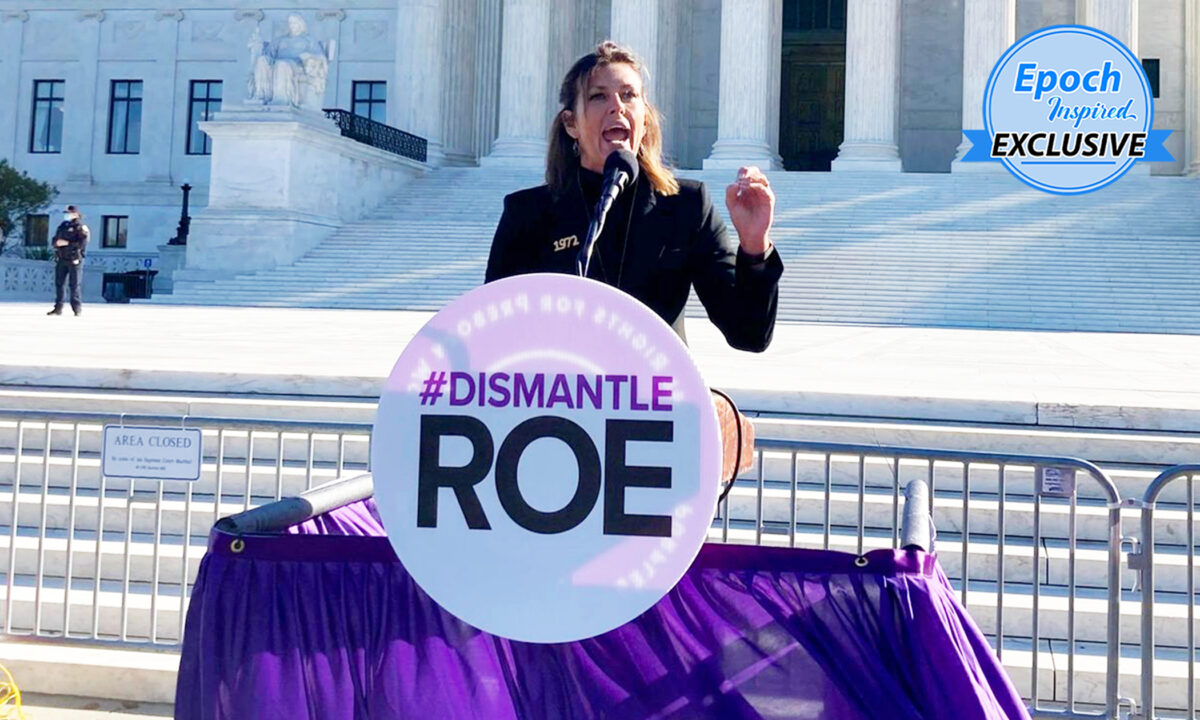 Kelly Lester speaks in a prayer rally in front of the U.S. Supreme Court in Washington, D.C. when it was announced that the Dobbs v. Jackson case would be heard in December 2021. (Courtesy of Kelly Lester)
People

'Forgiveness is a very powerful thing,' says the mom who once worked in the abortion industry
BY Louise Chambers TIMEMay 6, 2022 PRINT

The life of a pastor’s daughter was changed forever when she was molested as a child, and raped at just 12 years old. Riddled with shame, the budding athlete lost faith that she was worthy of God’s love.

It took years of suffering, including drug and alcohol addiction, four abortions, and domestic abuse, before Kelly Lester of Richmond, Virginia, got the wake-up call she needed to relocate her faith and reclaim her life.

Speaking to The Epoch Times, Lester, 45, said that her turning point came when her father had a vivid dream of her being dead due to a fatal head injury, and he prayed for her protection. The vision coincided with the time her boyfriend was threatening to hit her on the head with a wooden board before dropping it.

“That was definitely the final thing that led me to turn my life around. That was the wake-up call,” Lester said. “By this time, I was almost 30 years old, and just tired; tired of being tired, tired of running.”

Lester was molested by her great-uncle at 3 years old. The trauma was internalized, but Lester was a bright child, and she fast-tracked into high school for her academic prowess. However, as a freshman at 12, Lester snuck out of the house to attend a party and fell victim to sexual assault. Terrified, she confided in her youth pastor.

“She told me that if I hadn’t left the house and gone to that party, that would never have happened,” Lester said. “I was feeling shame, because I had planned on waiting until I got married to have sex. For that to happen, and for her basically to blame it on me, I shut down. That is partly what led me down the path I was on.”

Lester became promiscuous by her early teens while craving the love she felt she no longer deserved from God. She became pregnant at 15; desperate not to shame her family, she had an abortion, and went on with her life, graduating from high school two years later. Once a promising student who dreamed of becoming an astronaut, engineer, or professional dancer, her college career was short-lived.

“I went to the University of Georgia for one semester, and then came back to Richmond and went to Virginia Commonwealth University for a semester. That was it,” said Lester. “We were partying really hard. I wasn’t really going to school, and my grades were bad. My parents told me I needed to take a break and figure out what I wanted.”

Lester claims her parents, albeit loving and attentive, were sidetracked by her troubled younger sister who ran away from home around the time Lester’s rebellion began.

“I’m not going to say they didn’t see what was happening to me, but my need wasn’t as dire in their mind, and I did a really good job of hiding it,” she recalled.

Lester plunged into a world of shame-fueled drug and alcohol dependence, relationships with violent men, and three more aborted pregnancies roughly five years apart. She also experienced abortion from the other side of the counter: working in the abortion industry. Lester was bartending and “living a really chaotic life.” She was looking for a job when she noticed a local women’s clinic was hiring for a receptionist. Attending the interview, she realized it was the same clinic that had performed her second abortion.

“The thing about sin is, when you’re dealing with the shame and the guilt and the condemnation from your sin, you oftentimes lead other people into it as a way to cover up, to make yourself feel better—I certainly wasn’t trying to do that on purpose.”

She said: “Everything about it alarmed me. When these women would come in for their appointment, the first thing we would do is hand them a Dixie cup with Valium. They would take the Valium, then they would sit in the waiting room.

“Sometimes, women would come up and say, ‘You know what, I’ve changed my mind.’ We would say to them, ‘Okay, we understand that you are currently under medication, so we’re required by law to monitor you.’ Once the Valium had kicked in, one of our nurses would come out and say, ‘Now look, honey, you are here. You’ve got the money. We’ve got everything that we need to do this. Let’s go ahead and take care of it for you today.'”

Ironically, the “interesting thing” amid this feigned care, Lester said, was that the staff wanted those women “out the door within 20 minutes” even after having their procedure done under “heavy sedation, which includes a cocktail of drugs, including fentanyl.”

Lester recalls women hemorrhaging and not receiving the proper aftercare, and women being sent home, uninformed.

“The majority of the procedures we did were under twilight sedation, a very heavy sedation where not only do you not feel much, but it actually erases your memory of what happened during the procedure and for most of the day. These women would have no idea what happened to them, and that bothered me,” she explained.

Yet, still shrouded in shame, it took a series of life-threatening accidents to convince Lester she could start over, and this time, holding firm to her faith in God.

Hit by a car while driving a Jeep in Phoenix, Arizona, Lester was thrown from the vehicle but felt something grab her and bring her back inside. “I had two other people with me,” she recalled; “nobody had seatbelts on, nobody got thrown out, and nobody got injured.”

On another occasion, Lester hit an embankment, and felt a presence envelop and protect her. “[It was] almost like an airbag, but that was pre airbag age,” she recalled. “I’ve had countless incidents over the years where there was undoubtedly the hand of the Lord protecting my life. I just wasn’t ready to surrender my life to Him.”

Lester’s surrender came after a further incident in New Orleans, in which an abusive boyfriend threatened to hit her over the head with a length of wood. It led Lester to call her father to come get her.

She came back to the church and joined a women’s Bible-reading group. She met and married her husband, Robbie, and moved to California, later returning to Richmond to help her father serve in his church.

Lester said her father was her best friend growing up, and their relationship remained strong until his passing in July 2021 at the age of 73. Lester and Robbie, who have six children together, have since bought the beloved Richmond home she grew up in.

“Over those years, the Lord began healing those places in my heart that led me to sin, restoring my identity, restoring that He loves me in spite of what I had done,” Lester reflected. “Over the years of trusting Him more and allowing Him to work, my faith and trust became stronger.”

Lester now works for Abby Johnson’s ProLove Ministries as director of outreach and government engagement and has testified to help get legislation passed. She travels the country to spread the pro-life message, meets with investors, and leads sidewalk advocacy campaigns in her hometown of Richmond.