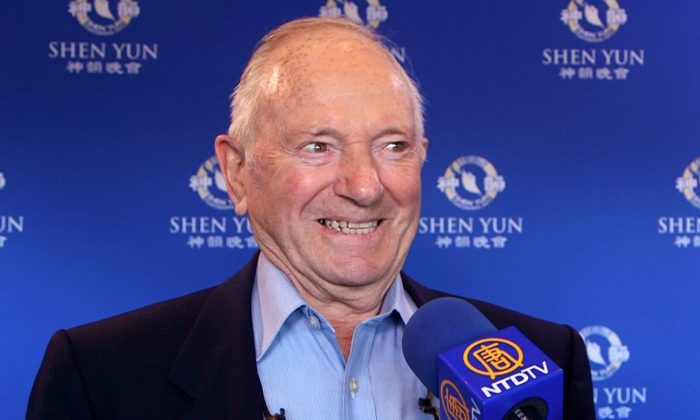 Mr. Hurt said, “I really thoroughly enjoyed the afternoon of theater. It is excellent, polished, and beautiful.”

Based in New York, Shen Yun is the world’s largest classical Chinese dance and music company, formed with the mission to revive the 5,000 years of traditional Chinese culture, which was destroyed by the current Chinese regime. Shen Yun presents stories from ancient times to the modern era to the world through the universal languages of dance and music.

“It was eye-opening,” said Mr. Hurt, who had initially wondered whether it was a company from mainland China. He seemed relieved to learn it was not. “But obviously it’s from New York! It’s beautiful, it really was.”

“Tell them to come around again. Let’s do it some more. Have some more talent from that part of the world and let’s see it. I understand this is 5,000 years old, some of it. Incredible.”

It gave him a good feeling, and he was “warm to the heart.”

With a big smile on his face, Mr. Hurt said his last name was Hurt, as in pain. “But I’m not in pain from this. I saw a beautiful thing and it really healed me.”