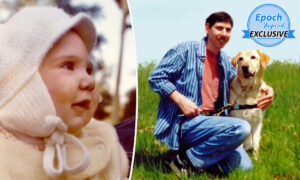 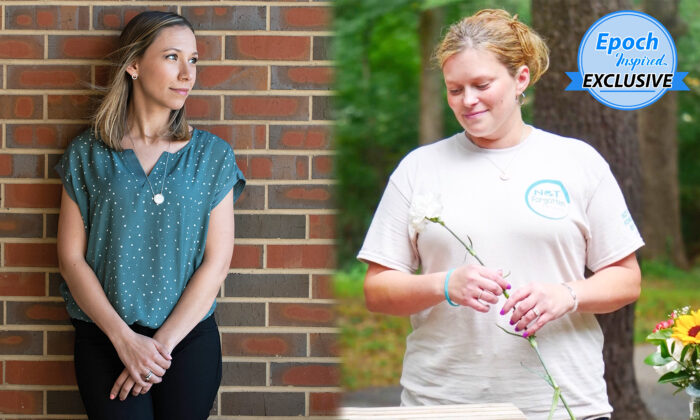 A shared journey of navigating through unplanned pregnancies by trusting God, and ultimately, choosing life.
By Louise Bevan

Two women who became pregnant at 16 chose radically different paths: one had an abortion and one chose open adoption.

Years later, their experiences aligned in a shared mission: to use their stories to enable other women to navigate their own unplanned pregnancies, and ultimately, choose life.

Speaking to The Epoch Times, Tori Shaw and Leah Outten shared how their life paths led them to find healing in faith, transforming them out of the cocoon of shame and the trauma of broken families.

Tori and Leah—both devout Christians, A students, and children of divorce—grew up just 30 miles apart in North Carolina. Recently, the brave moms, who run their two separate nonprofits to help expectant parents, came together to share their heart-wrenching backstories in a short film, Two Paths.

Tori said she was searching for love in the wrong places after her biological father all but disappeared from her life.

“I felt rejected by my father. I witnessed a lot of things in my family that weren’t loving, kind, and gentle,” Tori said. “I was searching for love in all the wrong places and did some things I shouldn’t be doing as a teenager.

“Our children are greatly affected by our family structure, and what they witness. We never know how it’s going to affect them. And they don’t always open up and tell us that they feel rejected. We need to be aware of it.”

During the summer of her 16th year, Tori got sick and was taken to hospital. The doctor performed a pregnancy test, and it came back positive. The baby’s father was an 18-year-old teen, Bryan, who would later become Tori’s husband.

“I was shocked,” she said. “It never occurred to me that I was pregnant. I was naive.”

Within just a few minutes, the doctor had scheduled an abortion. With her mother’s consent, Tori remained in hospital, sleeping through most of her stay. Her abortion took place within 24 hours of her hospital admission.

Tori was flooded with guilt and shame for consenting to abortion for the baby girl she would later name Taylor. She never discussed the trauma with her mother, who was also in shock, and refrained from reaching out to family and friends.

For Leah, choosing open adoption when she got pregnant at 16 set her on a fundamentally different path.

Leah’s parents, both college students when they had her, never married, and they lived separately. While Leah credits them with providing separate safe and loving homes, an incident of sexual abuse as a teen left her feeling vulnerable, looking for self-worth and connection in the wrong places, and craving “male affirmation.”

She became pregnant, but fortunately, she found the support she needed.

“That’s when God really used [my pregnancy] to take me out of that and to find my real identity in Him, where my true worth and love comes from, and that really shifted my family dynamics,” Leah said. “We’re in this crisis situation.

“One thing that my family did very well from the beginning was to get me into counseling right away. There were a lot of high intense emotions, feelings, anger, and grief within me and within my parents, but we got into counseling to navigate all that off, and to better our relationship.

“A lot of birth parents can feel rejected by their families, but my family was drawn to me, and was such amazing support that I was able to feel that love from everybody around me that I was kind of seeking in other ways before.”

Prior to her pregnancy, Leah remembers a conversation in which her father and stepmom revealed they were pro-life. Their rationale made sense to her; when she was offered abortion, it didn’t feel right.

“It felt like that was choosing death,” Leah said. “I had this innate morality for my child, and I was willing to sacrifice for that. I always knew, ‘I’m here to protect this child, no matter what.'”

Leah’s family not only sent her for non-biased counseling in her first trimester, but also gave her space and time to make an informed decision. At seven months pregnant, Leah chose open adoption. She named the baby, she chose the adoptive parents, and even ensured she was entitled to monthly visits for the first several years of the baby’s life.

Birth mom and daughter maintain a close relationship to this day.

From the very beginning, faith in God strengthened Leah’s convictions.

“I wanted to walk through whatever I needed to walk through to give this baby life,” she said. “God has used the adoption to just grow me, but also to use that pain for a purpose. I’m trusting God, still, every day.”

Tori recalled how she forced herself not to think about the abortion and turned to drink and drugs to numb the pain.

“I did my best to hide it and try to pretend like it never happened,” Tori said. “I viewed myself as worthless and not seeing myself with any value. It took me a long time to really realize where a lot of my depression and anxiety were coming from. It all stems from that abortion.

“Most women who have had an abortion will say that they struggle with shame, and regret, and guilt. Many women struggle with suicidal thoughts—it’s an overwhelming feeling.”

“My faith in God is everything,” Tori said. “I ran from God after my abortion because I knew what I had done was wrong, but once I was willing to just let it go, and let God use my story, He has really done amazing things through my ministry.”

Tori inaugurated Not Forgotten Ministries in Winston-Salem, a sidewalk advocacy and mentorship program for women who choose to retain their pregnancies, plus post-abortion faith-led healing and weekend retreats for those who don’t.

“We’re not trying to judge them or force them to do anything. We just want them to consider all their choices, because I’ve been there and I know that it’s a rush, hurry decision,” Tori said.

“We also mentor moms that choose life. It can be life-changing for many women.” Some women who’ve had an abortion go on to join the ministry’s sidewalk advocacy, bringing the healing full circle, she said.

Tori launched a GoFundMe campaign with her sights set on purchasing premises across the street from Planned Parenthood. After raising $36,675 of an $825,000 goal, she has since downscaled the ministry’s expansion to renting a space across the hall from its current premises. Currently, the nonprofit is offering free regular ultrasounds to expectant moms.

Eighty miles away in Charlotte, Leah runs Woven Together, a nonprofit providing “triad support” between the adoptive parents, adoptees, and birth parents, whose experiences are inextricably connected.

“We just do a lot of education to try to help anybody who was touched by adoption to do it better versus how it’s been done in the past, with a lot of silence and anger and misunderstandings,” Leah said.

Tori has even written a book, titled “I Had a Secret for Seventeen Years: A Story of Redemption and Healing After Abortion,” detailing her experience. Now a mom of four, Tori lives in High Point with her husband of 16 years, Bryan. Leah lives in Charlotte with her husband of 14 years, Mark, and their five children.

Both women believe family is paramount.

To other women experiencing an unplanned pregnancy, Leah says: “You do have a choice. There are people who want to help, walk alongside you in this; you’re not alone.

“If you don’t have a family support system, that there are people who are very, very happy to be a listening ear and to guide you as much as we can.”

It is Tori’s hope that all expectant moms will consider all their options. “It feels like a panic, it feels like a desperate situation, but you don’t have to be in a rush,” she said. “Slow down.

“Abortion does take the life of a baby, but it also really affects the life of the mom. We hope that the women will find the healing that they need, and be able to walk in freedom, so they can really be alive, you know, and really enjoy their life and let God use them for good.”