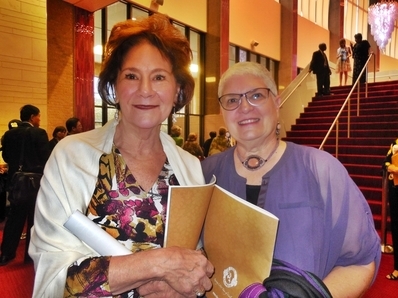 SAN ANTONIO, Texas—“It’s very moving and made me appreciate the struggle the Chinese are going through,” said Jane Marie Young, executive director of Abode, Contemplative Care for the Dying, after attending Shen Yun Performing Arts, on May 4, at the Lila Cockrell Theatre.

Shen Yun cannot be seen in China today, where traditional culture has been nearly lost after decades of communist rule.

The final song was very moving for Ms. Young: “The message in that final song just touched my heart so deeply. Life is suffering, and it’s a journey. We have to find a way, and we’re going to find it only if we find God’s path.”

Jane Marie Young received a master’s degree in contemplative psychotherapy from Naropa University in Boulder, Colo., and has been providing end-of-life care in a variety of settings for over 21 years. Ms. Young said the spiritual values of Shen Yun resonated deeply with her and were “totally in line with my own.”

“That last song was so meaningful to me because of the difficulty of life’s journey. When you find out it’s all about following God’s path, then there’s a joy that’s waiting for us to come home again, so it’s beautiful, just beautiful,” she said.

Ms. Young also hopes her friends will be able to see Shen Yun. “I would say it would be an incredible education for them to understand the Chinese culture better, its history and beauty and its sadness—that it’s not possible to express that beauty to their own culture today—also what we have in common, the struggle and the journey,” she said.

Diane Datz, a registered nurse from Abode, was also in the audience. “I was totally unprepared for the spirituality. … I thought I was coming to watch a dance performance. It was beautiful,” she said.

China was once known as the Divine Land. This profound name describes a land where deities and mortals coexisted, and a belief that the divine transmitted a rich culture to the people of the Earth, says the company website.

“I’m going to tell everybody to come and see it. I have some dancers in my family, and I know they will be deeply moved by it. The level of artistry and expertise was astounding,” Ms. Datz said.