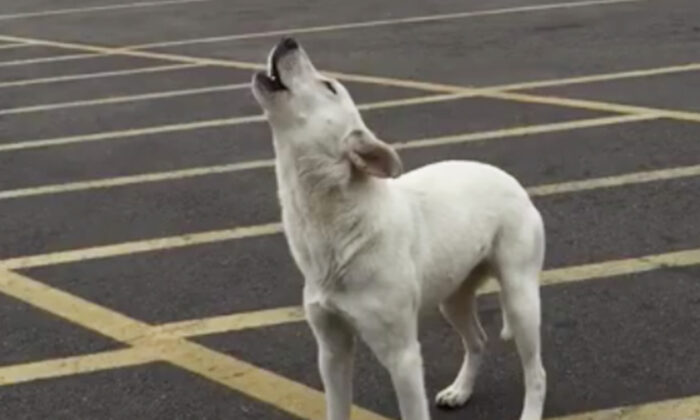 A dog abandoned in a parking lot waited in vain for days for her owner to return before accepting help from a rescuer. During those nine days, the young puppy, named Samantha by rescuers, howled for her family.

While we may never know the full background of this story, which unfolded way back in December 2015, the incident still serves as a strong reminder of animal cruelty: It is devastating for innocent animals to be discarded in such a cruel and callous manner.

However, brave Samantha’s unconditional love shone through despite the traumatic way she was dumped and left behind in a parking lot beside Sam’s Club in Memphis, Tennessee.

For nine long days and nights, Samantha never gave up waiting and hoping. Every time a car drew up, the anxious pup would hopefully look at the occupants in case it was her owner returning.

Despite having her hopes dashed continually, Samantha was not ready to give in to despair. And neither was Mary Murphy of Arrow Dog Rescue, a local rescue charity, who happened to spot the pup on Dec. 9 that year, reported the Huff Post.

Murphy recorded a video of Samantha howling and waiting for her owners and tipped off her rescue center about the dog’s plight. However, rescuing Samantha was going to take a lot of patience and determination as the down-on-her-luck canine was far from ready to abandon her forlorn vigil.

As the abandoned dog was nervous and distrustful of strangers, for three and a half days, Murphy waited patiently to win Samantha’s trust, reported I Love My Dog So Much. At the start, Samantha wouldn’t let anyone near her. It was clear that despite everything, Samantha still had a strong bond of love for her owner. It seemed as if all that the pup wanted was for her owner to return to take her home.

The only thing Murphy could do as an experienced animal rescuer was to bring her pet dog along and play a long waiting game. Murphy’s inexhaustible patience and perseverance paid off, however.

Finally, on the ninth day of her ordeal, Samantha came around. She felt comfortable enough to allow Murphy to approach her for the first time. It was the breakthrough that had been waited for for so long.

A relieved Samantha accepted help and followed Murphy and her dog home—a decision that would transform the abandoned pup’s life for good. Later, Murphy took Samantha to the Arrow Dog Rescue shelter in the hope of finding the abandoned dog a forever home.

The shelter’s volunteers posted Samantha’s heart-wrenching story on social media. And this doggie tale hit a chord with their online followers. Soon, the sanctuary was inundated with offers of a safe and loving home for Samantha.

The shelter volunteers were able to match Samantha with a perfect new home, but that was not the end of the story.

It was soon apparent that Samantha was still traumatized by her abandonment. But like the patience that Samantha had shown in the parking lot, her new family extended the same and waited for Samantha to recover from the psychological stress.

Today, Samantha’s fears and uncertainty have vanished thanks to the boundless love her new forever family shows her. It is indeed a sad story but one that clearly shows how enduring love can indeed mend any broken heart.

Samantha’s story, however, amply demonstrates that a dog’s love is unconditional. It’s quite sad and beyond comprehension how some ignorant pet owners abandon their animals in such a cruel way.

When dog charities are willing and able to find these “unwanted” animals new homes, there is no excuse for dumping them in a parking lot.