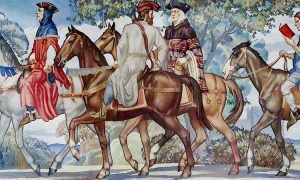 A Mirror From Long Ago: The Pilgrims of ‘The Canterbury Tales’
0
Share Now
TelegramFacebookTweetEmailTellMeWeReddit
Copy Link 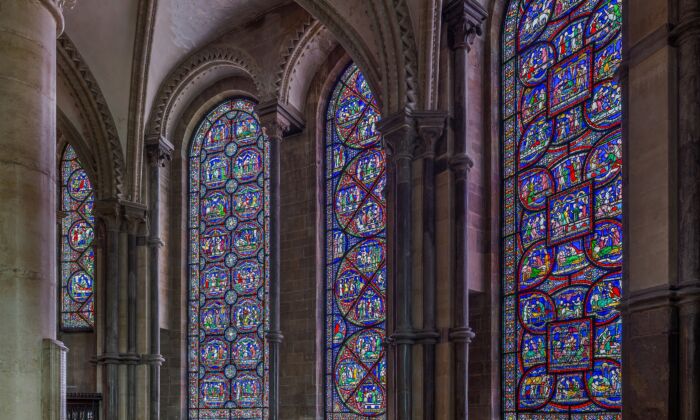 On the southern side of Canterbury Cathedral’s Trinity Chapel, seven stained glass “miracle windows” depict the miraculous healings that were said to have taken place at St. Thomas of Canterbury’s tomb between 1170 and 1220. (David Iliff/CC BY-SA 3.0)
Traditional Culture

A Window Into Thomas Becket’s Life, Death, and Miracles

The exhibition: 'Thomas Becket: Murder and the Making of a Saint' at The British Museum, London
By Lorraine Ferrier
biggersmaller
Print

It is Dec. 29, 1170, at Canterbury Cathedral in southeast England, one of the most important places of worship in the country. The archbishop of Canterbury, Thomas Becket is settling down for dinner in the Archbishop’s Palace after a busy day.

It is a day like any other, yet an extraordinary event is about to happen, a heinous act of sacrilege that will affect the king, country, and much of Europe for centuries to come.

Five vivid eyewitness accounts, some of them graphic, help us re-create the scene. Outside Canterbury Cathedral, four of the knights of King Henry II have just arrived from Normandy, France, home of the royal court. They traveled to England with an express purpose: to avenge the king.

Barging their way into the palace, the knights demand Becket’s arrest. He refuses to cooperate. Becket’s monks persuade him to take refuge in the cathedral. But the sanctity of the church will not protect him from the knights’ bloodthirsty rage.

Storming into the cathedral, the knights abruptly interrupt the glorious sound of monks singing and chanting Vespers, evening prayers. The knights shout: “Where is Thomas Becket, traitor to the king and the kingdom?”

Becket grabs one of the cathedral’s pillars in another attempt to resist arrest. Enraged, one of the knights raises his sword high over his head, and then strikes the archbishop. The other knights follow his lead, until England’s most powerful churchman lies lifeless in a pool of blood.

‘Thomas Becket: Murder and the Making of a Saint’

Becket’s life and martyrdom has fascinated many for centuries. The British Museum in London hopes to open in May its new exhibition: “Thomas Becket: Murder and the Making of a Saint.”

Remarkably, the exhibition is the first large UK show dedicated to the saint and focuses on Becket’s life and legacy, how he rose and fell, and how 350 years after he died, he was once seen as a traitor by King Henry VIII.

Stunning pieces of jewelry, sacred reliquaries, illuminated manuscripts, and an 800-year-old stained glass window from Canterbury Cathedral are some of the items that shed light on Becket’s intriguing life and legacy.

From Clerk to Archbishop

Becket’s parents came from Normandy and settled in England after the Norman Conquest. His father was a merchant of no notable wealth. He was educated in Merton Priory in southwest London, and then he studied in Paris for a few years. On his return to England, Becket began working as a clerk for Theobald of Bec, the archbishop of Canterbury.

Becket was charming, intelligent, and had an authoritative presence. These qualities impressed the archbishop to such an extent that he put his clerk forward for the role of royal chancellor. It was as chancellor that Becket and King Henry II became firm friends, enjoying the pleasures of the royal court, including hunting and traveling together.

As royal chancellor, Becket had a lavish lifestyle, living in opulent homes and traveling to France on his own ships.

When the archbishop died on April 18, 1161, Henry wanted Becket to become archbishop. The king had a political motive for appointing his friend: He wanted Becket to be both chancellor and archbishop so that he could have a close ally in the church. Ultimately, as king, Henry wanted to reduce papal dominance and restore sovereign power to the state, as it had been during the reign of his grandfather, Henry I.

At the time, Rome exerted dominance over much of England. For instance, most of England was educated by the church. In addition, any crime committed by an ordained churchman was tried in the church court and was not under the crown’s jurisdiction, regardless of the crime committed.

Becket was appointed archbishop on May 23, 1162, and consecrated on June 3. But Henry’s idea did not go as he planned. Becket resigned as royal chancellor later that year, and he fully embraced his responsibilities as archbishop.

From Friend to Firm Foe

In just a few years, a firm rift would form between the king and the archbishop—Becket would stay loyal to the church and its interests while Henry still hoped to restore the crown’s power. The fallout would lead to Becket’s murder.

In the years prior to Becket’s death, the problems between the two men worsened. In October 1164, Henry summoned Becket to the King’s Council where, among other accusations and demands, he was ordered to relinquish all non-landed property and to make his accounts from when he was chancellor available for scrutiny. He refused to accept the council’s decisions.

In 1165, Becket fled to north-central France, where he spent six years exiled at Pontigny Abbey. During that time, Henry’s son, Henry the Young King, was crowned (becoming joint sovereign) by the archbishop of York, Becket’s rival. Becket was furious: Coronations were traditionally presided over by the archbishop of Canterbury.

Becket appealed to the pope, and after intense negotiations, Henry and Becket spoke for the first time in years. Henry promised to restore Becket as archbishop of Canterbury and assured him that it was safe for him to return home to England.

But before Becket left France, he wrote to the archbishop of York and two of the bishops present at the recent coronation, excommunicating all three. This action may have proved fatal for Becket.

The archbishop of York and the two bishops traveled to Henry’s court in Normandy and told the king what had happened. Henry was incensed: “What miserable drones and traitors have I nurtured and promoted in my household who let their lord be treated with such shameful contempt by a low-born clerk!” he said, according to one of Becket’s biographers.

To this day, no one knows if Henry himself sent his knights to Canterbury. A commonly held belief is that the knights set off on their own accord, after hearing the king’s angry outburst.

A Window Into Becket’s Miracles

After Becket’s death, Canterbury Cathedral became an important pilgrimage site, with many seeking cures for their diseases. In medieval times, illness was believed to be divine retribution for sins, and so saints were often sought for a cure.

At the cathedral, monks filled ampullae, often pewter flasks, with Becket’s diluted blood that they believed had miraculous properties. Pilgrims could purchase these ampullae filled with this concoction they called St. Thomas’s Water.

Several artifacts in the exhibition demonstrate how the water was used. One astonishing ampulla depicting Becket flanked by two knights is on display. The knights have their swords drawn as if they have been caught the moment before they strike the archbishop.

Detailed scenes of pilgrims using St. Thomas’s Water are depicted on some of Canterbury Cathedral’s stained glass windows, called “miracle windows,” made in the early 1200s. The series of 12 windows once surrounded Becket’s shrine in Canterbury Cathedral’s Trinity Chapel. Becket’s shrine no longer exists, but seven of the windows do and show the miracles that  occurred in the three years after he died.

The cathedral’s miracle windows are the only known media to show Becket’s miracles. The stories on the windows must have been “reassuring and uplifting” to the pilgrims who had journeyed to the cathedral, said Leonie Seliger, director of stained glass conservation at Canterbury Cathedral, in the exhibition press release.

For the first time, one of the 30-foot-tall stained windows will leave Canterbury Cathedral to be installed in The British Museum exhibition. The chosen window is the fifth in the series of 12 that shows several stories of healings.

Last year, researchers working on the windows in preparation for the exhibition made a startling discovery. Looking at the window under a microscope, they realized that some of the stained glass panels were in the wrong order. They deduced that, when the window was restored in the 1660s, the craftsmen must have made the mistake when the window was reconstructed. For the first time in over 350 years, the window can be seen as it was intended.

The Stories of the Miracles

The window in the exhibition shows depictions of common folk being healed. At the top of the window,  in the left-hand teardrop, Ralph de Longeville sits next to Becket’s tomb, where an attendant bathes his legs in St. Thomas’s Water, after which he is cured of leprosy. Below the four teardrop panels showing Longeville, Goditha of Hayes enters on the left; her stomach appears swollen from dropsy. Moving along to the right of the window, she’s seen leaving the tomb, looking slimmer and healed of her disease.

The second story (from the top) of the window shows a group of women traveling to Becket’s tomb. Among them is Etheldreda who suffered from a high fever, and Saxeva who had painful arms and stomach. Both women are depicted as being healed.

In the third panel from the top of the window, Eilward of Westoning is depicted. This is the only known medieval artwork to depict a castration. Eilward had been blinded and castrated as punishment for stealing. Remarkably, after he prayed at Becket’s tomb, his eyesight returned, as did his testicles.

Interestingly, “The ineffectiveness of surgeons and physicians is a theme in the miracles of St. Thomas,”  said expert of medieval visual culture M.A. Michael, on the Getty website. This is especially clear in the bottom story of the exhibition’s miracle window. In the left-hand teardrop, Hugh, a monk from Jervaulx Abbey in Yorkshire, northeast England, is bedridden and being attended to by a lay physician. Hugh’s story progresses in the top teardrop, where he’s at Becket’s tomb, sipping St. Thomas’s Water. In the right teardrop, his illness can be seen being purged by a sudden and violent nosebleed.

The Legacy of St. Thomas of Canterbury

On July, 12, 1174, a remorseful Henry walked barefoot three miles to Canterbury Cathedral, confessing his sins in an act of penance. When he entered the cathedral, he ordered the bishops, who had been present when Becket was murdered, to each flog him five times with a rod. He then commanded each of the 80 monks to flog him with the rod three times. Henry’s blood spilled on the spot where Becket died.

Before Henry’s penance, his wife, Eleanor of Aquitaine, and two elder sons were plotting against him with his archrivals William II of Scotland and Louis VII of France to take over his land. After Henry repented at Becket’s tomb, miraculously nothing came of the rebellion, and his sons sought Henry’s forgiveness.

From that day, Henry often prayed at Becket’s shrine.

Becket’s legacy traveled far and even prompted England’s first visit by a head of state: Louis VII. The French king’s 14-year-old son, Prince Philip, was gravely ill, prompting the king to make the pilgrimage to Canterbury Cathedral in the hope that St. Thomas of Canterbury would heal his son. Philip recovered.

Even now, Becket’s martyrdom is remembered by world dignitaries. Last year, on the 850th anniversary of Becket’s murder, President Donald Trump said: “Thomas Becket’s death serves as a powerful and timeless reminder to every American that our freedom from religious persecution is not a mere luxury or accident of history, but rather an essential element of our liberty.”

The British Museum’s exhibition “Thomas Becket: Murder and the Making of a Saint” is due to open in May, pending COVID-19 restrictions. To find out more, visit BritishMuseum.org