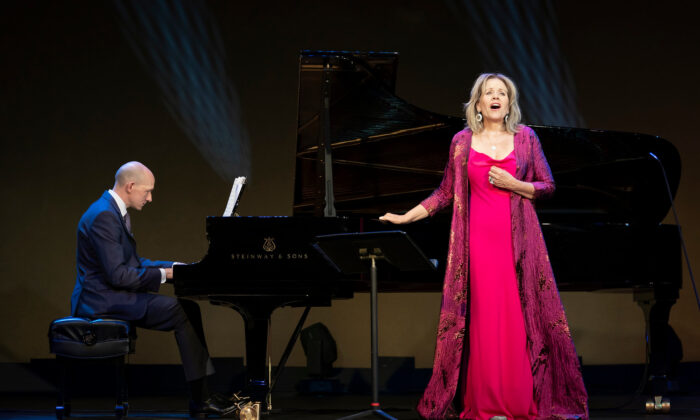 Renée Fleming recording “For the Love of Lyric” at The Barns at Wolf Trap, Aug. 14, 2020 with Robert Ainsley at the piano. (Todd Rosenberg)
Performing Arts

A Virtual Songfest: ‘For the Love of Lyric’ Opera

The Lyric Opera of Chicago has been in the process of expanding its patron base for years.  Rather than being content with a seasoned audience of opera lovers, the Chicago institution has been spreading its lure, offering a variety of genres to capture a new generation of music lovers.

The Lyric credits world-renowned soprano and its special projects advisor Renée Fleming for the musical expansion called the Broadway Initiative. She suggested that the opera company present classical musical productions to cap off the end of the opera year in late spring, thereby extending the season and enticing musical fans to the opera house.

The Lyric hoped that once audience members experienced its enhanced revisions of Broadway shows, they would want to come back for more. After all, with the opera company’s world class orchestra, great vocal talent, large choral resources, and grand stage, Broadway musicals would look and sound better than ever.

The Broadway Initiative began in 2013 with a stunning production of “Oklahoma!” and since has produced “The Sound of Music,” “My Fair Lady,” “Jesus Christ Superstar,” “West Side Story,” and others. The experiment paid off as it brought in a substantial increase in revenues and subscribers to the Lyric’s opera house.

That’s why in the midst of the COVID-19 closure, the Lyric decided to present, in a pre-recorded virtual concert, a variety of musical styles that would offer something for everyone.

Performing on the carpet-strewn, expansive Lyric stage with the opera company’s gorgeous auditorium in the background, “For the Love of Lyric” presents some of opera’s great vocal talents, singing songs that will melt one’s heart, lift one’s spirit, and encourage one’s hopes.

‘For the Love of Lyric’

The lineup of the one-hour show features a range of enchantment. From the music of passionate opera to unforgettable Broadway musicals to well-known pop standards, it is a stunning concert performed by some of the world’s most extraordinary vocalists who are wonderfully accompanied by music director Doug Peck or Robert Ainsley at the piano.

For opera lovers there is an exquisite duet with sopranos Renée Fleming and Julia Bullock singing “Sull’aria … che soave zeffiretto” from Mozart’s “The Marriage of Figaro,” as well as soprano Ailyn Pérez, who portrayed Marguerite in Lyric’s 2018 production of Gounod’s “Faust” and who delivers a melodic “Chi il bel sogno di Doretta” from Puccini’s “La Rondine,” as well as a loving rendition of “Estrellita” by Manuel Ponce.

For fans of Broadway musicals, there’s the stirring and uplifting “The Impossible Dream” by Mitch Leigh and Joe Darion from “Man of La Mancha,” sung in rousing fashion by bass Soloman Howard (previously in Verdi’s “Luisa Miller” at the Lyric in 2019), who also opens the concert with a powerful “Lift Every Voice and Sing” by John Rosamond Johnson and James Weldon Johnson.

Tony Award and Grammy Award-winning singer, songwriter, and actress Heather Headley, who starred in “The Lion King” on Broadway and in Elton John and Tim Rice’s “Aida,” turns in a standout performance as she soars with “Look to the Rainbow” from “Finian’s Rainbow,” “Shadowland” from Disney’s “The Lion King,” and “Home” from “The Wiz.”

Continuing the concert, there is a wonderful treat in J’Nai Bridges coming together with the sweet and adorable Chicago Children’s Choir to harmonize “Sing,” written by Joe Raposo as the signature song for “Sesame Street.”

The highlight of the concert, though, is golden-voiced Fleming singing “Zueignung” (“Dedication”) by Richard Strauss, a poignant “The Last Rose of Summer” from Friedrich von Flotow’s romantic opera “Martha,” and the lush “All the Things You Are” by Jerome Kern and Oscar Hammerstein II.

“For the Love of Lyric” is an elegant celebration of music that may entice viewers to dress up, open a bottle of champagne, and enjoy an evening of great listening pleasure. The concert is so delicious that many will want to view it more than once.

While there is no charge for the virtual event, Anthony Freud, the Lyric’s general director, president, and CEO, who narrates the concert, asks for donations. “Without ticket revenue from our performances, philanthropy is Lyric’s only source of income this fall.”

In one of the most heartfelt and moving moments of the virtual event, Freud explains the meaning of “The Impossible Dream,” which he believes encapsulates the purpose of the concert with a hope that it will be an inspiration for our times.  He said that the song is “an anthem to the power of human beings to endure, to persevere, to create change for the better when the odds are against them.”

‘For the Love of Lyric’
No Charge at LyricOpera.org
Running Time: 1 hour
Available: Through Dec. 12, 2020