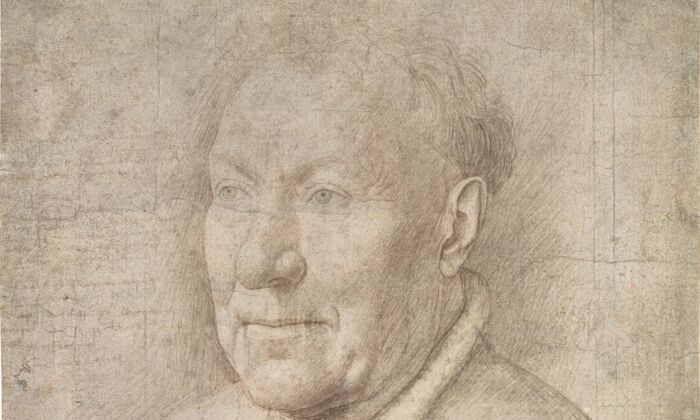 A US First: Flemish Master Jan van Eyck’s Only Surviving Drawing Is in New York

Anyone who has seen a Jan van Eyck painting up close will be in no doubt of his brilliance at depicting every inch of detail in luminous oils. He perfected the medium. But few people would have had the opportunity to see van Eyck’s draftsmanship in person.

Only one van Eyck drawing survives: “Portrait of an Older Man,” in the Kupferstich-Kabinett in Dresden, Germany.

Over 580 years old, the drawing in goldpoint and silverpoint, is the earliest study attributed to a Northern European artist. Van Eyck autographed the work, making it the only drawing universally accepted as signed by the artist. Due to the drawing’s fragility, it’s rarely displayed.

Remarkably, this exceptional drawing is now on U.S. soil and is on display at The Morgan Library & Museum through mid-January, as part of a special exhibition.  “Van Eyck to Mondrian: 300 Years of Collecting in Dresden” celebrates the 300th anniversary of the Kupferstich-Kabinett’s founding collection. All works on display are drawings; among the traditional ones are works by Lucas Cranach the Elder, Hans Holbein the Younger, Rembrandt van Rijn, and Peter Paul Rubens.

“The immediacy and intimacy of the medium [drawing] allows us to reconstruct the mark-making … inviting us to watch over the artist’s shoulder at the moment of creation,” exhibition curator Austeja Mackelaite said in the press release. Mackelaite is The Morgan’s Annette and Oscar de la Renta assistant curator of drawings and prints.

Van Eyck’s study “Portrait of an Older Man” is a preparatory drawing for the painting of the same name, held by the Kunsthistorisches Museum in Vienna. This remarkable drawing allows us to see a little of how van Eyck diligently studied his subjects in preparation for painting. He paid fastidious attention to detail. “His eye was at one and the same time a microscope and a telescope,” art historian Erwin Panofsky is quoted as saying.

The study somewhat demonstrates what Panofsky meant. It is a working document, full of observations necessary for van Eyck to paint a realistic portrait. He rendered the man in three-quarter view, a portrait style he pioneered, as most of his Italian peers used the profile view in portraits.

In goldpoint and silverpoint, he conveyed the inner warmth of the unknown man, as he gazes into the middle distance, with a slight smile on his lips.

On the left side of the drawing, van Eyck wrote detailed notes describing the specific details, tones, and colors of the face, such as “the apple of the eye, around the pupil” is “dark yellowish, and in its circumference, close to the white, bluish.”

Van Eyck knew his optics as evidenced in his paintings. But here in this study, just using gold- and silverpoint, he managed to convey how the light hit the man’s face, without any use of color.

The chance to see this fragile drawing in America is perhaps a once-in-a-lifetime opportunity.

The Morgan Library & Museum exhibition “Van Eyck to Mondrian: 300 Years of Collecting in Dresden,” runs until Jan. 23, 2022. To find out more, visit TheMorgan.org