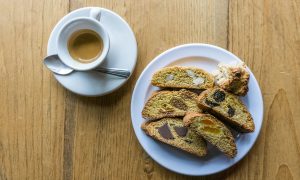 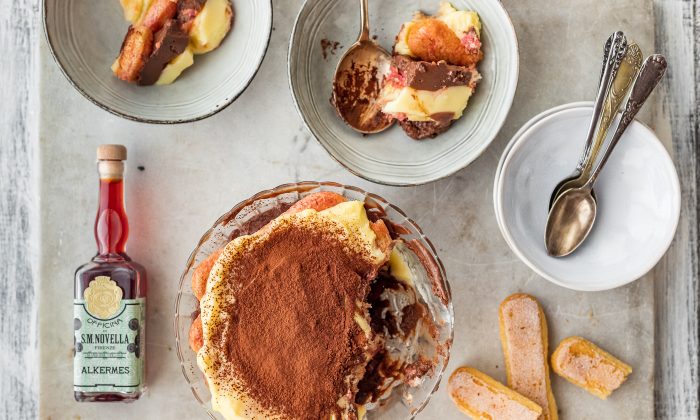 Revisiting a childhood ritual with a classic, no-bake treat
By Giulia Scarpaleggia

There’s an Italian word that doesn’t have a proper translation in English: merenda.

Merenda is more than an afternoon snack, the surface translation of the word; it is an eating habit codified just like lunch and dinner, with its own traditions, rules, and memories. As we usually have dinner quite late here in Italy, around eight at night, the merenda is a quick snack children usually eat in the afternoon, in between four and five o’clock.

It has a connotation of childhood, as you are usually given your merenda until you are out of school, before you are considered too old to be allowed a slice of bread topped with butter and jam in the afternoon. However, I know a good share of adults who are still very happy to eat cake for merenda.

Before the arrival of industrial, mass-produced, sugar-drenched snacks, bread was usually the most common ingredient eaten for merenda.

Pane e marmellata—bread, butter, and jam—was always a crowd-pleasing option, usually prepared when I had friends over. I was proud to offer them the choice of which jam they liked better: my mum’s blackberry jam or a bright apricot one.

When my grandmother was in a rush, she would often simply offer me a slice of bread—our Tuscan bread, made without salt—with prosciutto or mortadella. That was a perfect pairing: a bland crumb with a few slices of salty meat. Sometimes in the countryside, people also add a sliver of butter.

In the winter, my grandmother would instead toast the bread for me, rub it with a clove of garlic, and douse it in our green and throat-tickling extra virgin olive oil. A pinch of salt and merenda was ready. That pane e olio would grease my chin, my fingers, and often my homework, too, but it was the most comforting snack you could have on a cold afternoon.

As soon as summer came, my merenda would change. Now, it was the turn of sun-ripened tomatoes, picked from my grandmother’s vegetable garden and rubbed on bread until it was soaked in ruby red juices. She would season my pane e pomodoro with that ubiquitous olive oil, then add salt and dried oregano. When in the summer I crave some quick and seasonal comfort food, this is still the merenda I make for myself, mimicking my grandma’s gestures and pouring the olive oil with her same rule of thumb: It is never too much.

There is also another merenda typical of the countryside, which I never had but that my dad used to love: pane, vino, e zucchero—bread, red wine, and sugar. Yes, you would stain a slice of bread with a few drops of wine, then generously sprinkle some sugar on top. It is genuine and old-fashioned, just like bread, butter, and sugar or honey.

Sometimes, my grandma or my mum would indulge me and my sister for merenda. This is when they would prepare a classic dessert: a zuppa inglese. The trifle would be scooped out into small cups and we would eat it silence, sitting on the couch, licking our cups clean.

“Zuppa inglese” literally means “English soup.” But is the dessert really from England?

Both Emilia Romagna and Tuscany claim to be the birthplace of zuppa inglese, in the 16th century, inspired by the English trifle and turned into something more Italian. The trifle’s pound cake or Madeira cake was replaced with a lighter sponge cake, and its whipped cream with our custard.

Another story wants the zuppa inglese to be born in the mid-19th century, in the hills of Fiesole over Florence, where the Tuscan maid of a wealthy English family put together leftover biscuits, chocolate pudding, and custard from their afternoon tea to create a hearty dessert. I do like this second origin better, even if it is probably only a legend. It says so much about the propensity of Tuscan people for using leftovers in a creative way, turning them into another delicious treat.

The key ingredient of a traditional zuppa inglese is alchermes: a Renaissance spirit, a favorite liqueur of the Medici family, the Tuscan elixir for long life, a pick-me-up for fragile women. The bright crimson liqueur is still made today by the Santa Maria Novella Pharmacy in Florence, with the same recipe created in 1743, along with many artisanal and refined liqueurs.

Alchermes is infused with spices, time and tradition, and a handful of dried insects—cochineals, which give it its characteristic color and also its name. Open a bottle of alchermes and inhale: you will recognize cardamom, coriander seeds, mace, orange peel, star anise, and vanilla, then a subtle rose aroma.

If you make zuppa inglese in a transparent bowl, something I really love to do, you will see a colorful stack of layers: yellow vanilla custard; a darker chocolate custard; pinkish savoiardi (ladyfingers) dunked in alchermes.

If you can not find alchermes, you can either substitute it with a cherry brandy, which will approximate the flavor but miss the bright rose color; or instead opt for coffee, which will produce a completely different result, more similar to a tiramisu but still delicious.

Pour the milk into a saucepan. Scrape the vanilla seeds from the pod and add them to the milk, then add the vanilla pod, too. Heat the milk over medium heat and remove it from the heat as soon as it starts simmering.

In another saucepan, whisk the eggs with the sugar and the corn starch; do it carefully to avoid any lumps. Slowly pour the hot milk in a thin stream over the eggs, stirring constantly with a whisk to prevent scrambled eggs.

Put the saucepan over medium-low heat and stir constantly with a whisk until it starts to thicken into custard; you will need about 5 minutes. Remove the custard from the heat and divide it into two bowls. Add the chopped dark chocolate into one bowl and whisk to melt it, until perfectly combined.

Pour the alchermes into a bowl and add the water. Use this to briefly dip the savoiardi, just a few seconds per side.

Dust the surface with cocoa powder and let the zuppa inglese sit in the fridge for a few hours before serving.