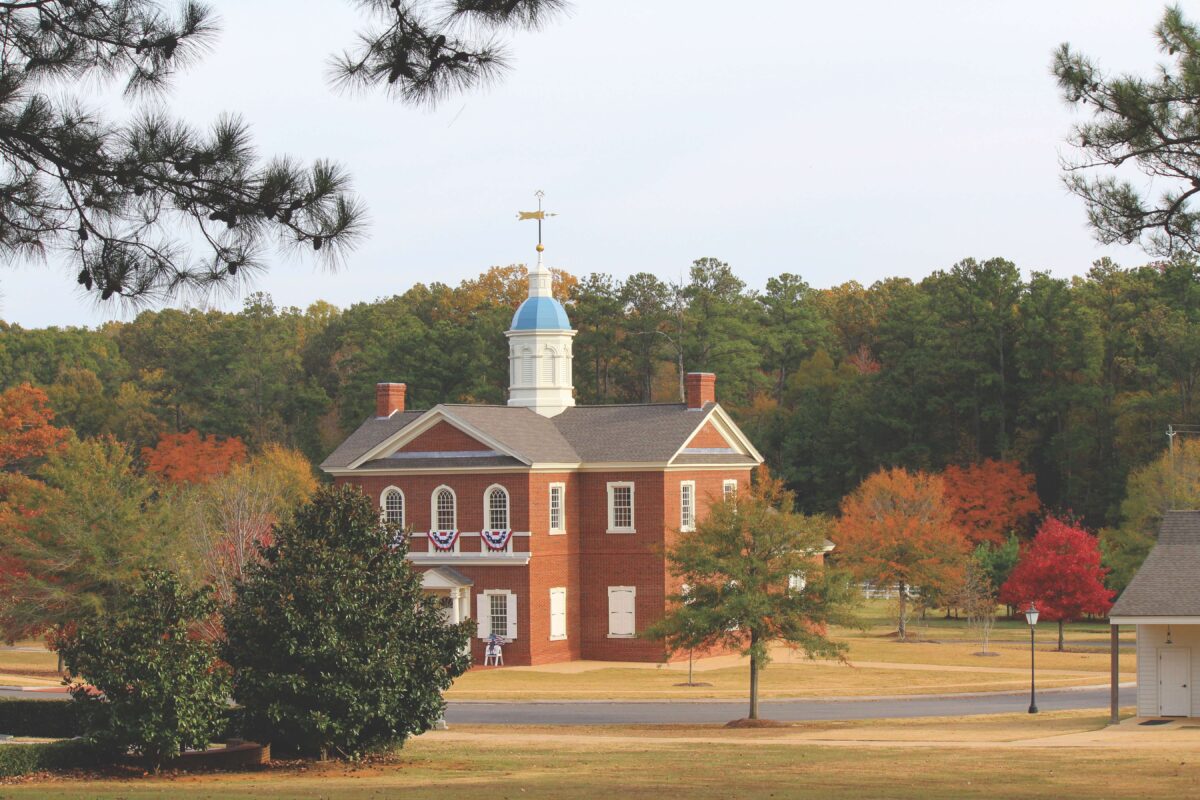 A Tour Through Alabama’s American Village, a Living History Museum Bringing the Revolutionary War to Life

The hall is grand, with hardwood floors and a high ceiling. A large portrait of George Washington greets visitors from the center of the main wall. The country’s first president looks regal, majestic. After all, he and a few leaders of the American Revolution penned a constitution that has given the United States a democratic legacy and history.

Many places around this country celebrate America, but down in Alabama near a small town called Montevallo, American Village beckons visitors to the country’s past with live demonstrations. “American Village is a snapshot of our country,” said Public Relations Manager Jeremy Ward. “Our history is for all of us. We are passionate about telling how our country came to be. As Americans, we all share the same story, and we want to tell this story here at American Village.”

American Village sits on 188 acres in central Alabama with 20 historically inspired sites and structures. Founder and President Emeritus Tom Walker dreamed up the project back in the 1980s. The popular attraction opened its doors on November 30, 1999, with a specific mission in mind.

“We are here to teach American history and create informed citizenship. American Village helps make our history more exciting and meaningful,” said Ward. “We do this with eight historical interpreters who approach this job with academic vehemence. They take on the roles seriously, dive in, and research to make their representation of these historical figures authentic.”

American Village hosts two to three school groups per day on its campus. These groups come from all over Alabama and the surrounding Southern states. Each year, 35,000 students get to experience our exciting history come alive, and another 35,000 public visitors come to learn about our country’s founding.

“Over the past 22 years, we have served around 800,000 students from schools in Alabama and surrounding states, and many more public visitors. We have also entertained high-profile people. Laura Bush wrote a message to our annual prayer breakfast one year, and Condoleezza Rice came and spoke another time,” noted Ward.

The mission statement for the nonprofit American Village Citizenship Trust says it all: “The American Village serves the nation as an educational institution whose mission is to strengthen and renew the foundations of American liberty and self-government by engaging and inspiring citizens and leaders, with a special emphasis on programs for young people.”

At the end of a visit to American Village, folks may pass again through the grand hall where George Washington’s huge portrait hangs; this time though, their appreciation and understanding of what this man and his compatriots did will endure.

“I have done this for five years, and I love it. Performing and teaching kids is so rewarding, and seeing them get involved in our historical plays is a lot of fun. I came here when I was their age, and I remember how engaging it was. It made me more attached to our history. Experiencing our history like this is so unique.”
—Richard Evans, who plays John Tazewell, Clerk of the 1776 Virginia Convention

“My favorite part of this job is bringing these historical characters to life by telling their stories, which connect our visitors with the human side of history. When that connection is made, I can see the students stepping into the shoes of these people who made sacrifices to give us the liberties we enjoy today. By bridging this gap between America’s past and its present, we can create a better future for all of us.”
—Nancy Moore Estes, Officer of Interpreted Programs

The Woman on the Ship

Sarah Bradlee Fulton was a crucial player in many critical events during America’s fight for independence. She lived in colonial Boston before moving to Medford in 1762.