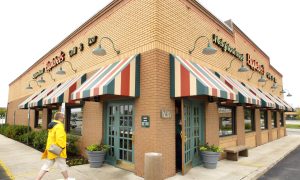 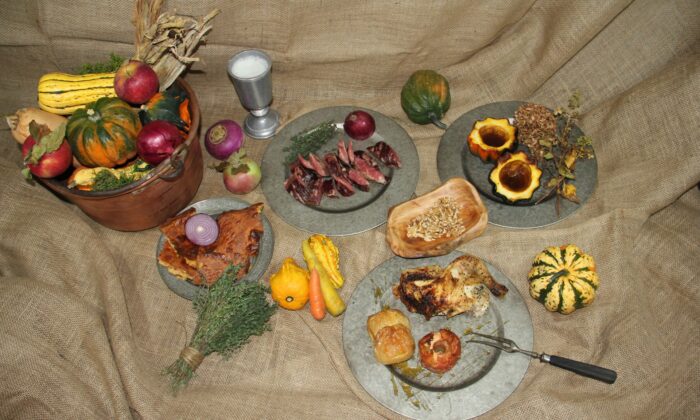 A modern re-creation of the first feast, including venison, roasted acorn squash, and wild turkey with apples. (Kate Korol)
Recipes

A Taste of History: The First Thanksgiving

Today’s Thanksgiving meal, with a giant turkey, mashed potatoes, cranberries, and pumpkin pies, bears very little resemblance to what was served at Plymouth Plantation (then spelled Plimoth) 399 years ago. Then, the meal was not followed by the watching of a football game.

To faithfully recreate the first meal of thanks for a bountiful harvest is a challenge. We know very little about what was actually consumed. What further complicates matters for a modern cook is that that cooking techniques have evolved: Few of us still cook over an open fire, and our easy access to a plethora of spices and ingredients is not even close to what the Pilgrims had available.

Since that first harvest celebration, this ritual giving of thanks for nature’s bounty has changed as new traditions, foods, and techniques evolved.

We do know that the Pilgrims had easy access to wild turkey and venison, and plentiful seafood such as fresh cod, mussels, and lobster. Edward Winslow, a founder and later governor of the English colony at Plymouth, Massachusetts, wrote in 1621 about this first meal:

“Our harvest being gotten in, our governor sent four men on fowling, that so we might after a special manner rejoice together after we had gathered the fruit of our labors. They four in one day killed as much fowl as, with a little help besides, served the company almost a week. At which time, amongst other recreations, we exercised our arms, many of the Indians coming amongst us, and among the rest their greatest king Massasoit, with some ninety men, whom for three days we entertained and feasted, and they went out and killed five deer, which they brought to the plantation and bestowed on our governor, and upon the captain and others.”

We also know that they consumed pumpkins and squashes, as well as Indian corn (or flint corn, so named for the kernels’ “hard as flint” shells), one of the oldest varieties of corn, after it was boiled or ground up into cornmeal.

Bread was not in evidence; no proper baking ovens had yet been constructed. At the time, the settlers used rather rudimentary roasting and baking techniques. They used cast-iron pots, covered with a lid, placed on low, open wood fires to create a simple “oven.”

Our re-creation uses wild turkey, venison, seafood, squash, and corn, and the recipes here are a close approximation of what would have been done in 1621. You will note that many dishes call for either bourbon or wine. All the alcohol will cook off, leaving just the flavor.

While we do not have American Indians attend our modern feast, inviting those who are alone and without a place to go on Thanksgiving remains a tradition. This writer often visits a Veterans Hospital to bring baked goods and play cards with the warriors whose families rarely see fit to visit.

Wild turkey is available for purchase online. D’Artagnan and the Exotic Meat Market are two good sources. A wild turkey is so very different from the monster turkeys in supermarkets, which have next to no flavor. Note that a true wild turkey has a gamey flavor and very little fat. Covering the bird with bacon adds the needed fat to prevent it from drying out while roasting.

Wash the turkey inside and out and pat dry.

Salt and pepper the inside of the turkey (you only need very little salt and pepper) and place the apples and the herbs into the cavity. Tie the turkey legs together with kitchen twine.

Place turkey into a roasting pan. Cover with slices of bacon.

Roast for 45 minutes, basting with bourbon two or three times throughout the process.

Remove from the pan, let it rest for 10 minutes, and then carve into large chunks. Serve with the roasted apples.

Fall is hunting season, and in some parts of the country, venison is easily obtained.  For those who can’t find it—or may be squeamish about eating “Bambi”—steak is a tasty alternative.

Marinate the meat in the red wine for at least 4 hours in the fridge. Let it come to room temperature before roasting.

Place the meat in a small roasting pan and roast for 15 minutes, or 30 minutes for well done. Remove from the oven and let it rest for 5 minutes. Slice into 1/4-inch pieces, season with salt and pepper to taste, and place on a serving plate.

Based on a recipe from Cape Cod.

Add mussels, cider, cider vinegar, ale, and rosemary. Simmer for 5 minutes. Stir. The mussels are ready when they open.

Using a strainer, transfer into a serving bowl. Discard those that did not open. Season to taste with salt and pepper.

Rinse the scallops and pat dry with a paper towel.

Melt the butter in a sauté pan over medium heat. Add the scallops, pan fry for 5 minutes, and then flip and pan fry for 5 more minutes. Season with salt and pepper to taste, and transfer to a serving dish.

Rinse the filet and pat dry with a paper towel.

Melt butter in a pan over medium heat.

Add the fish, cook on one side for 7 minutes, and then flip and cook for another 7 minutes. Season with salt to taste, and transfer to a serving dish.

For a festive repast, one lobster will suffice as a treat.

Ask your seafood supplier to boil the lobster and cut it apart. At home, heat the lobster at 200 degrees F for about 15 minutes.

Melt the butter. Place lobster on a serving plate, pour heated butter over the top, and serve.

The acorn squash in this recipe can be replaced with butternut squash. The alcohol will cook off, yet leave the sweet, smoky flavor of bourbon.

Cut the squash horizontally into two halves. With a spoon, remove all the seeds.

Place the squash halves into a baking pan. Fill each cavity one-third full with brown sugar and bourbon.

Place the baking pan into the oven and roast for about 60 minutes. Occasionally use a fork to poke the squash; if the fork goes in easily, they are done.

This recipe is from Plimoth Plantation. According to their website, samp is the Pilgrims’ version of nausamp, “a traditional Wampanoag dish that is made from dried corn, local berries, and nuts,” similar to porridge or oatmeal.

The word samp is a simplified English version of the word nasaump. The description below comes from the 1600s book ‘Two Voyages to New England,’ by John Josselyn:

“It is light of digestion, and the English make a kind of Loblolly of it to eat with Milk, which they call Samp; they beat it in a Mortar, and sift the flower out of it; the remainder they call Hominy, which they put into a Pot of two or three Gallons, with Water, and boil it upon a gentle Fire till it be like a Hasty Puden; they put of this into Milk, and so eat it.”

Bring water to a boil in a large saucepan with a heavy bottom. Add the corn grits and stir. Simmer until they are soft, about 10 minutes, and the water has been absorbed. Serve with milk and sugar.

The pilgrims had access to a local apple known as the Tinmouth apple, which also provided cider.

Wash and core the apples. Arrange in a small baking pan and bake for 40 minutes, or until soft—use a fork to test.

Transfer the apples to a platter and drizzle with a bit of honey. Serve.