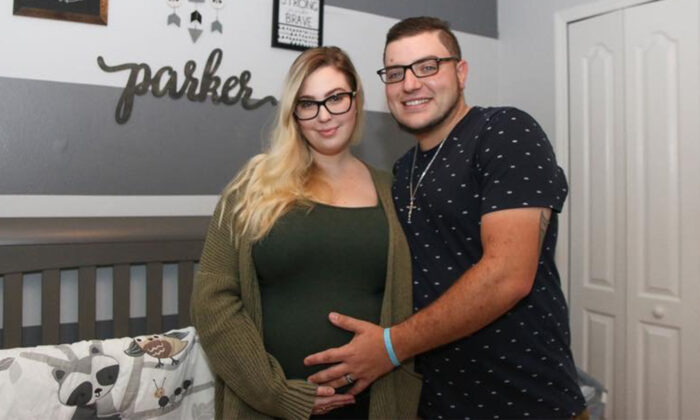 A Tale of Pregnancy, Birth, and Raising a Baby With Spina Bifida

Life is often filled with some unexpected turns, with each having the power to teach us something.

When Jessica and Spenser Trinkle’s second baby, Parker, was diagnosed with a complicated condition in utero, instead of giving up, the family opted for a life-changing fetal surgery. The Trinkles found hope in harrowing circumstances, and today, their baby boy is thriving.

Jessica shared her story with The Epoch Times.

During a weekend getaway to upstate New York, the couple found out that they were expecting their “sweet little man.” Two faint lines confirmed the couple’s suspicions. “It was from that exact moment we knew our lives were about to forever change,” Jessica said. “We were elated.”

On Nov. 1, 2018, Jessica went for a routine scan. But after receiving some keepsake 4D images of her baby’s face, she was ushered into the doctor’s office.

“He then invited me to sit next to him to ‘talk about our little guy,’” Jessica recalled. “I felt extremely numb, my heart had that feeling you get when you’re on a rollercoaster that’s about to go down a big drop.”

The medical staff then ordered blood work, at which point a nervous Jessica called her husband and mother; they both left work immediately to be by Jessica’s side. When they were back to find out more about the findings, doctors explained they had discovered that a sac was growing on the baby’s spinal cord.

“We were afraid of all things,” Jessica shared. “Stillborn, miscarriage, brain-dead, everything.” In a worst-case scenario, the doctor explained, Parker would need a wheelchair. “That was the first time anyone said his name,” Jessica said. “It made it real.”

Jessica, who was just over 23 weeks pregnant at that time, was referred to Winnie Palmer Hospital for Women & Babies in Orlando, Florida, for further testing.

“We began the day with an ultrasound that was as scary as it was beautiful,” Jessica recalled. “[With] my husband beside me, I could tell he was just as nervous as me, so I closed my eyes to keep it together.”

Baby Parker’s official diagnosis was myelomeningocele spina bifida, a serious congenital defect of the spine in which part of the spinal cord and membrane is exposed through a gap in the backbone.

“The neurosurgeon brought up fetal surgery,” Jessica explained, “and my first words were, ‘Yes, that’s what I need to do. Let’s do it.’” Jessica and her unborn baby needed extensive testing before the surgery itself, all of which needed to happen before the 25th week of pregnancy.

The Trinkles were working against a ticking clock.

However, Jessica shared that at no point did their specialists and hospitals ever bring up termination to her. “Except extremely briefly, saying that ‘I had that right to choose an alternative,’ which I am so appreciative for,” she further added.

“Some families don’t have the same luxury that I had with the experts,” Jessica reflected.

Parker and Jessica underwent open fetal surgery to repair Parker’s spine at the Winnie Palmer Hospital at 25 weeks, as planned, under the guidance of 13 doctors and nurses. They were the fourth mom-baby pairing ever to have this pioneering surgery in the state of Florida.

“The recovery process became easier week by week, especially with the guidance and love of my fetal care team,” said Jessica. Baby Parker healed as beautifully as his mother after surgery and was born at 37 weeks exactly on Feb. 6, 2019.

Parker went home with his elated parents after just 48 hours of observation. He was the first fetal surgery baby at Winnie Palmer Hospital not to see the inside of the NICU in 70 years.

The devoted parents quickly realized that their love for Parker was not contingent upon his diagnosis. “He is half of my heart, along with my daughter,” Jessica shared. “I love showing people that he cannot be defined by his diagnosis.”

The family even commissioned a series of intimate photographs that were taken by EBU Photography to honor Parker’s journey. They shared the photos online, hoping that their thriving baby boy would inspire others to open their minds to the possibilities that lie beyond a complex diagnosis.

Navigating Through Challenges and Counting Blessings

The Trinkle family calendar was quickly filled to bursting, but Jessica found joy in her busy schedule. “I love taking [Parker] to community events and showing people that he cannot be defined by his diagnosis,” Jessica said. “If you would ask me if I would change any of it,” she added, “I would never.”

Jessica even teamed up with a non-profit, Redefining Spina Bifida, with the aim of placing accurate information about the condition at the top of any Google search.

“Real stories,” Jessica said, represent children who are absolutely thriving. “Many are in college on their own, starting to drive, taking dance, gymnastics, adaptive sports, excelling in school, and are just plain old amazing,” she explained.

Some children are able to walk and run; some use a wheelchair. “But what’s so bad about wheels?” Jessica mused. “They are pretty stylish and cool these days.”

The Trinkle family observes greater and greater benefits from Parker’s fetal surgery. “In physical therapy,” Jessica said, “he’s moving muscles that in a textbook he shouldn’t be able to move.”

His family describes each new day with their 8-month-old baby boy as “a blessing.”

“From the outside looking in, you would never be able to tell anything was different about him,” said Jessica. “He plays with his toys, he’s vocal, laughing, and aware of everything.”

As Parker grows up, his loving family hopes to imbue him with the confidence to follow his dreams and know that his difference is a source of strength, not weakness. The Trinkles also hope that Parker will always know how much he is loved, and that family is forever.

The Trinkle family are sharing their story in the hope that it allows even one person to find comfort in their overarching family philosophy: “love that matters most.”