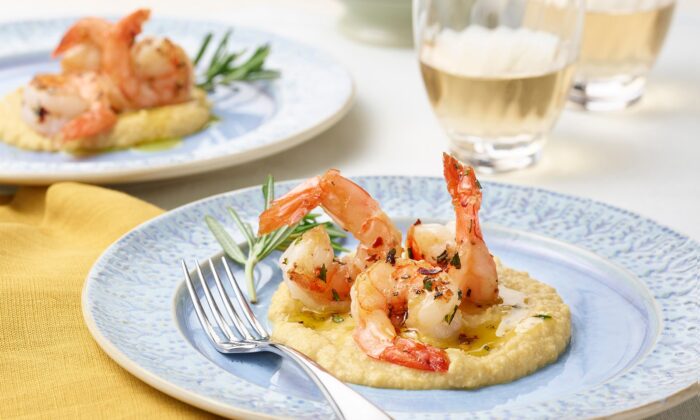 These prawns are cooked simply in extra-virgin olive oil with fresh rosemary and chile flakes, then plated on a bed of creamy, lemony chickpea puree.
Recipes

A Recipe for Better Brainpower, From a Mediterranean Island

I love promoting recipes and cooking concepts that inspire both pleasure and health. Culinary medicine marries nutritional science and the art of cooking to create dishes with health-boosting properties. As a chef, it is important to me that these dishes don’t just do our body good, but taste great as well. It is, after all, food’s flavor that keeps us coming back for more.

This particular recipe, for instance, contains a combination of nutrients that are known to increase brainpower. I recommend it for students cramming for an exam, or really anyone who wants to clear brain fog or improve their memory—as well as those seeking to take their palates on a culinary tour of a majestic Mediterranean island.

Located between Italy and the French mainland, directly north of Sardinia, the incredibly beautiful island of Corsica was ruled by Italy until the mid-19th century, when it became part of France. By combining both Italian and French country-style cooking with local specialties, the island developed a cuisine as awe-inspiring as its scenery.

The sea that surrounds Corsica is known for having more than 40 species of fish. Thus, seafood plays a heavy role in local menus, along with other specialties such as olives and extra-virgin olive oil, chestnuts, cheeses, cured meats, herbs, and wine.

Corsican prawns with chickpea cream is one of my most requested recipes. Combining fresh seafood with pantry staples, such as chickpeas, is representative of not only the cuisine of Corsica, but of the greater Mediterranean region as well. Here, the prawns are cooked simply in extra-virgin olive oil with fresh rosemary and chile flakes, then plated on a bed of creamy pureed chickpeas, punched up with garlic and lemon juice.

The dish offers an impressive, gourmet-looking presentation, and tastes so great you would never guess how good it is for you.

Breaking Down the Benefits

The prawns (or shrimp) used in this recipe, combined with extra-virgin olive oil, rosemary, and chickpeas, offer a wide array of health benefits.

First of all, the antioxidants in shrimp can protect your cells against damage, especially sun damage. Shrimp and prawns also contain plenty of selenium and zinc.

Selenium plays an important role in the health of our immune systems, as it helps lower oxidative stress in the body, which reduces inflammation and enhances immunity. Studies have demonstrated that increased blood levels of selenium are associated with enhanced immune response.

Zinc is needed for DNA synthesis, immune function, metabolism, and growth. It may reduce inflammation and the risk of age-related diseases. Some diseases even inhibit zinc absorption, so eating extra amounts of it can be helpful.

In folklore, the herb rosemary was often used to represent “remembrance,” and nutritionally speaking, fresh rosemary helps to boost our brainpower. Considered a cognitive stimulant, it helps improve our memory, as well as alertness and focus; the aroma alone can help with the latter.

Like extra-virgin olive oil, rosemary is a rich source of antioxidants and anti-inflammatory compounds, which are thought to help boost the immune system and improve blood circulation as well. Since inflammation is the root cause of all illness, consuming anti-inflammatory foods helps to ward off disease in general.

Extra-virgin olive oil is an integral ingredient in the Mediterranean region. Studies have shown that an olive oil-rich diet can help protect against malignant tumors; reduce the risk of breast, colon, and bowel cancer and the incidence of melanoma; prevent the formation of blood clots; and lower the levels of total blood cholesterol (believed to be responsible for the low incidence of heart problems in countries where olive oil is the main cooking fat).

It also helps protect the body against the negative effects of toxins, microorganisms, parasites, and other foreign substances. It can improve calcium absorption in the body and prevent osteoporosis, and may prevent memory loss and rheumatoid arthritis in healthy elderly people.

Finally, chickpeas are high in nutrients, including protein, fiber, and immunity-boosting, inflammation-fighting zinc. I buy chickpeas in large quantities and use them to make delicious recipes all week long. I keep plain cooked chickpeas in a plastic container in the refrigerator to add to salads, soups, and stews.

The words “chickpea cream” may evoke smooth and silky hummus, from the Middle Eastern region of the Mediterranean, but creamy, chickpea-based dishes are also common in the Southern European region. Historically, the Southern European countries did not have access to the sesame paste (tahini) used by the Arabs, so they made their own versions of chickpea purees without it.

I usually make one batch of this puree to serve one night, then add sesame paste to another batch to make hummus. Chickpea puree can also be made into a creamy soup or sauce for pasta, as well as a healthful and delicious base for other proteins.

In this recipe, colossal or jumbo shrimp can be substituted for prawns.

Heat remaining 2 tablespoons oil in a large skillet over medium-high heat. Add prawns or shrimp, rosemary, chile flakes, and salt and pepper. Cook, uncovered, for approximately 2 minutes per side or until prawns or shrimp turn pink.

Spoon chickpea cream onto small plates evenly and flatten with the back of a spoon. Place prawns or shrimp on the top of the plate and serve immediately.

Recipe from “The Mediterranean Diabetes Cookbook” by Amy Riolo

Amy Riolo is an award-winning, best-selling author, chef, TV host, and educator. As a Mediterranean lifestyle ambassador, she is known for sharing history, culture, and nutrition through global cuisine, and simplifying recipes for the home cook. Find her at AmyRiolo.com