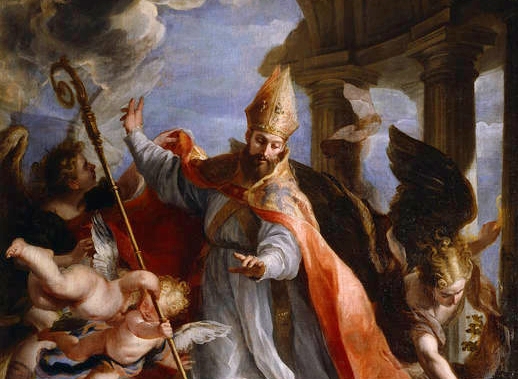 The influential Christian theologian believed that some scripture was meant to be interpreted figuratively. A detail from “The Triumph of Saint Augustine,” 1664, by Claudio Coello. Prado Museum. (Public Domain)
Traditional Culture

A Question of God, Part 1: Why Does God Ask Questions?

St. Augustine observed long ago that “whatever appears in the divine Word that can be referred neither to virtuous conduct nor to the truth of faith must be taken to be figurative.” I think the key word in his sentence that we have to come to terms with is the word “figurative.”

The “divine Word” means, of course, the scriptures. And it is easy to see that the Ten Commandments, for example, are a clear case of exhorting us to virtuous conduct. Equally, we can delve into the Epistles of Paul in the New Testament and find plenty of examples of what constitutes “the truth of faith.”

But then, setting aside this large body of virtue and truth texts, we also have huge swaths of text—myths, stories, parables, and so on—that make up what might be construed as “figurative.” That seems easy and straightforward, doesn’t it? It does, but it isn’t! It’s important in looking at the Bible to realize that figurative truths exist alongside literal truths, and sometimes can be even more powerful.

One of the problems with atheists, and especially those of a scientific cast of mind (sometimes called “scientism”), is that they look for literal meanings where, in fact, figurative things are meant.

And, it’s not just atheists who do this, for if we go back to the New Testament, we find the Pharisees—religious leaders (not atheists!)—doing it. A great example would be in Mark’s gospel (14:58) where Jesus is accused of saying that if “this Temple” is destroyed, he will make another in three days. Here, clearly, the figurative meaning that Jesus is referring to is his own resurrection, but the accusers and priests assume that he actually—literally—means he will rebuild Herod’s temple (that took 46 years to build, John 2:20) in three days!

But still worse than scientism, however, is when we find the aesthetic artist types who also, incredibly, seem not to understand what figurative means. A good example of what I am talking about occurs in the book “Revelations: Personal Responses to the Books of the Bible,” published in 2005, in which various celebrities and experts give their responses and interpretations to many of the books in the Old and New Testaments.

Do Creative Writers Understand the Figurative?

In “Revelations: Personal Responses to the Books of the Bible,” I was astonished to read the well-known novelist Louis de Bernières writing on the book of Job and claiming: “God in the story [of Job], is not omniscient (He asks Satan what he has been up to) …” This is a pretty major claim to make against God, and it will come as no surprise that the rest of the article really likes to stick the knife into God and his reputation.

But leaving aside all the other accusations that de Bernières brings against God (for we are in the book of Job after all!), what do we make of this theological assertion that God cannot be omniscient because he asks Satan a question?

Here, we come back to the figurative again. Anyone who has really read and studied the Bible would know that God’s asking questions in no way invalidates his omniscience. There is a profound figurativeness in God asking questions, and to see this in action, let’s examine in some detail the first time that God asks a question. The scenario will be extremely familiar to you.

In Genesis Chapter 3, we find Adam and Eve in the Garden of Eden having just eaten of the fruit of the Tree of Knowledge of good and evil. They hear God walking in the Garden and they hide from him. God’s first question is “Where are you?” and his second and third are “Who told you that you were naked? Have you eaten from the tree of which I commanded you not to eat?”

Who, on the basis of these three questions, would think that God did not already know the answers to them? The language is figurative, and because it is figurative it is, paradoxically, true! We can only understand the catastrophe that happened to mankind at the beginning—the aboriginal mistake, the Fall—through poetry since we have no way of understanding the mind of God or even the state of perfect human beings, except through poetry, that is, through figurative language.

Why Does God Ask Questions?

So we are left with asking two questions. The first is, Why does God ask questions when he already knows the answers? And this, I think, helps us delve further into the depths of meaning in this seemingly simple story or myth.

A starting point might be that to see the presence of God “in the cool of the day” (notice, not the heat or passion of the day) is somewhat analogous to the voice of conscience: They have done wrong, and they know it; but they don’t know it and wish to hide from it. But there is no hiding. If we won’t come to God, then God comes, walks, toward us.

Then, in this personal encounter (and isn’t conscience intensely cool but also intensely personal?) we find God—clearly knowing the answers to his own questions—going into what in modern parlance might be described as a “coaching” mode. Yes, God the ultimate coach!

For what do coaches do? By questioning, they draw out from the subjects the answers that are within them, but yet which unaided they seem unable to reach. The point of God’s question is always to enable the subject to self-realize, to rescue their self from their own predicament.

We see this time and again in the Bible. For example, the very next questions God asks in the Bible are in the next chapter (Genesis 4): Why is Cain angry? Why has his countenance fallen? And, encouragingly, if he does well, will not Cain’s countenance be lifted up? There, again, God is coaching Cain, giving him every opportunity to put right what Cain knows is wrong. And, of course, God knows that this coaching is going to fail. Cain is going to go his own way.

In a way, contrary to de Bernières’s conclusions, the Bible is a record that leaves human beings without excuse, for despite all the warnings and all the coaching, humans tend to go their own way anyway. And what is true here, also seems reflected in other myths of the world (for instance, Pandora’s Box), which account for the dilemmas and evils we still currently have to face. There is, then, profound truth in this.

But that leads on, nicely, to our second question that we said appertains to God’s questioning and his omniscience. For just as we have taken issue with de Bernières for an inadequate survey of biblical material, we ourselves must take our own medicine. The second question relates to the fact that God’s question is not, indeed, the first question that occurs in the Bible. We find that the first ever question in human history (figuratively understood) was posed by another character, who happens to appear in the book of Job too: Satan.

Part 2 of this article will explore that question and that character and his meaning for us in this real world that we are in, but which requires figurative interpretation to understand.