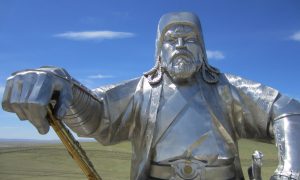 An Ancient Mystery: Where Is the Tomb of Genghis Khan?
0
Share Now
TelegramFacebookTweetEmailTellMeWeReddit
Copy Link 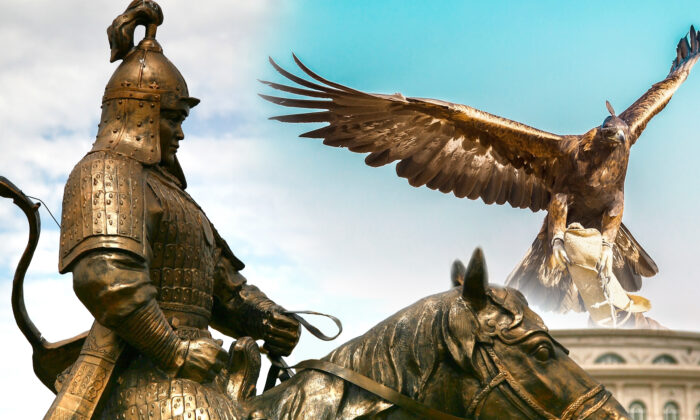 The 72-year-old Brazilian novelist Paolo Coelho is most renowned for his 1988 novel The Alchemist. However, in 2006, he compiled a collection of tales, short stories, and opinions called Like the Flowing River, and between the pages nestles a profound story about Genghis Khan, the first Great Khan of the Mongol Empire, and his falcon.

As the story unfolds, one learns more about the destructive nature of anger and the hidden value of a faithful friend.

The story of Genghis Khan and His Falcon derives from a visit to Kazakhstan, Central Asia, where Coelho was invited to accompany a group of hunters on a day trip. The hunters were using a falcon as their “weapon” against their intended prey.

“Unable to talk to them,” Coelho wrote of his hunting comrades, “I paid more attention to what they were doing.”

One of the hunters removed a small silver hood from the bird of prey’s head. The falcon took off, and the party soon relocated the bird with a vixen caught in its talons.

Upon returning to the hunters’ village, Coelho regaled the events of the day to the waiting villagers and asked how the bird was so well trained. However, nobody could answer that question. They could only say, “the art is passed from generation to generation.”

What the villagers could tell the author, however, was a short yet profound story delivered over a shared lunch.

“One morning,” began the story, “the Mongol warrior, Genghis Khan, and his court went out hunting. His companions carried bows and arrows, but Genghis Khan carried on his arm his favorite falcon, which was better and surer than any arrow, because it could fly up into the skies and see everything that a human being could not.”

“However, despite the group’s enthusiastic efforts,” Coelho wrote, “they found nothing.”

Genghis Khan, frustrated by the group’s lack of success, separated from his party and rode on alone with his falcon. After a long sojourn in the forest, Khan became weary and thirsty.

“In the summer heat,” wrote Coelho, “all the streams had dried up, and he could find nothing to drink. Then, to his amazement, he saw a thread of water flowing from a rock just in front of him.”

Khan slowly filled a silver cup, but as he was about to take the first sip that could quench his thirst, the falcon flew over and dashed the cup from his hands. Khan was furious but patient with his favorite bird thinking it might have been thirsty too.

To his great annoyance, however, the bird repeated the same act once again.

“Genghis Khan adored this bird, but he knew that he could not, under any circumstances, allow such disrespect,” Coelho wrote. “Someone might be watching this scene from afar and, later on, would tell his warriors that the great conqueror was incapable of taming a mere bird.”

Khan then made a decision. As he filled his cup for the third time, he held his sword, and as the falcon swooped down he pierced the bird’s chest with his sword, killing it instantly.

The thread of water was no more, so a determined Khan climbed up to find the source. “To his surprise,” Coelho continued, “there really was a pool of water and, in the middle of it, dead, lay one of the most poisonous snakes in the region. If he had drunk the water, he too would have died.”

Khan, stricken with remorse, carried the dead falcon back to his encampment. In honor of his winged comrade, Khan ordered a gold figurine to be made, with a tribute etched onto each outstretched wing.

“Even when a friend does something you do not like, he continues to be your friend,” read the first engraving.

“Any action committed in anger is an action doomed to failure,” read the second one.

Mongolians today largely regard Genghis Khan as their founding father. Coelho’s story is a short one but reveals a powerful truth on the danger of letting one’s pride or anger overwhelm them.

The falcon and his gesture, in the story, represent the importance of intuitive communication between parties who may not share a common spoken language.

Khan acted in haste, and due to that, he lost his favorite, most loyal, and a prized hunting companion.

However, now most philosophies, religions, spiritual disciplines, and science emphasize the importance of self-control. “Self-control,” according to an article written by Nathan De Well, a professor of psychology for the American Psychology Association (APA) “is the capacity to override an impulse in order to respond appropriately.”

Self-control, as he further explains, has three main components: monitoring (keeping track of thoughts, feelings, and actions), standards (guidelines that steer us toward desirable responses), and strength (the energy we need to control our impulses).

“Effective self-control,” according to him, “hinges on all three ingredients working together.”

In addition, self-control has great benefits.

Coelho’s depiction of Genghis Khan in the short story above shows a man succumbing to a lapse of self-control, and, as such, the author’s vignette serves as a reminder to us all; there is so much at stake when we act in haste.