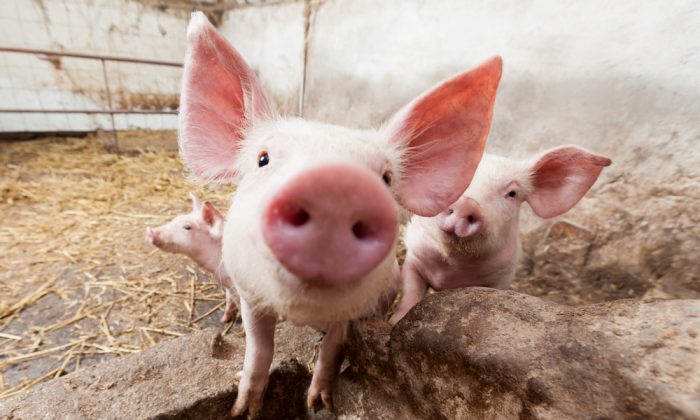 A Pig in Winter

I know, I know, it’s not exactly balmy right now. But in the spirit of carpe diem, there’s no better time to try a pig roast. So rather than cozying up around a ham or turkey for Christmas, the family and I packed up our bags and headed to the Jersey Shore to visit my in-laws.

My father-in-law, Don Philipp, is not only a chef; he also knows his pigs. He used to hunt wild hogs in Florida, where they decimate the crops. Afterwards, he would organize whole pigs roasts.

As befits his Hawaiian heritage, he has also cooked pigs for luaus (parties) the traditional way, in an underground pit. But it takes a lot of time and very, very hot lava rocks. It’s easier done in Hawaii unless you succeed at procuring lava rocks from a landscape store—but even so, good luck if you can keep your rocks hot. Once you drop the rocks into the pit, heat up the rocks, and pile the pig on top, you can’t reach the rocks so easily anymore. The last thing you want to end up with at day’s end is half-cooked pig.

Another alternative is roasting on a spit, but that’s not heat-efficient. “I know guys who’ve done it, and it takes forever. We ended up eating at 1 o’clock in the morning. Better to go with a box,” said my father-in-law.

The box refers to a box roaster, which looks something like an oven set up on wheelbarrows.

Our Christmas pig was going to be small at first—20-something pounds—to be cooked up in the backyard, but you know how these things go: your best friend gets ahold of the news, and before you know it, you’ve got a 47-pound pig on your hands and 20 people to feed, old and young’uns alike.

A pig roast is not just about cooking. A fair amount of time goes into preparing it. And so here I was, in the dark, cold of Christmas Eve, eyeing the dressed (or rather, undressed) and brined pig, my human nose to its porcine snout.

If there was a Mr. or Mrs. Jones snooping from across the street, he or she would have beheld a suspicious scene of three characters with huge syringes, working quickly and hunching over the pig’s body. Don had made a mojo of apple cider, Coca-Cola, and spices and we were using the syringes to inject the pig with it.

“Careful not to go through the other side, or it’ll spring a leak,” he said. The pig then got a rub-down in coarse salt before being locked into the roasting box for the night.

The next day we hauled the pig-in-the-box and coals over to the roasting site in Don’s best friend’s huge backyard that sits right next to a golf course.

The singular thing about the roasting box is that once you put the pig in, the coals go on top of the box, creating a very hot, indirect heat source, that over the hours of of cooking, turn the pig into a succulent, moist feast. Every two hours, hot coals have to be added, to keep the heat intense.

About five hours after the pig started roasting, the meat was done, but the skin needed to be crispy, so the pig, which was held together by racks on both sides, was flipped over, and its skin scored.

The dogs obviously knew something delicious was cooking afoot, with small (Yorkie), big (Weimaraner), and in-between (a mix of some kind) curiously sniffing close by. Already you could catch a whiff of porky goodness floating in the cold winter air.

After a few predictions of “20 more minutes,” finally the time came. The cover of coals was lifted, and underneath, nestled the box, was the pig, not only browned, but in the light of the flashlight, shining with glorious, begging-to-please-eat-me skin.

There was no ceremony about it. A handful of us dug into the skin, in a primitive kind of way, and forgetting the others waiting in the house. It was crunchy, caramelized, the the ultimate cure to fulfill any and all cravings for salt and fat.

“It’s the best part. Cooking a pig in the oven might be faster, but there’s no other way of getting the skin other than cooking it nice and slow. It renders the fat and makes the meat moist and tender,” Don said.

He made quick work out of carving the rest of the pig, mixing it all on the tray, intentionally, so you couldn’t tell which part was from the neck, which part was from the hams. The head remained, though, and to be honest, I harbored some odd mix of fascination and being creeped out by it. Would be be served on a platter, with an apple in its mouth?

Then Don cut out the meat from the cheeks and handed it to us. After the skin, these were the second revelation of the night. They were the most tender pieces of pork I’d ever had.

If I learned anything that night, it’s this: the secret to having delicious roast pig is that as reckoning time gets closer, you have to keep close to the pig (even if that means, outside, even in 20-degree weather).

Bring your beer or your cocktail, have some laughs, but stick by the pig, and help out the cook a little bit. You’ll be rewarded with the first, most fragrant dibs. There’s only so much skin and so many cheeks. And when the meat is all cut up, the guests waiting inside will never know what they’ve missed. But you will.

Should you ever want to try your hands at roasting a whole pig, Don advises to brine it first. “It really cleans it out, and gets rid of the heavy flavor, the gaminess.”

Then toss out the brine before you inject. You can play with the mojos, or sauces that you inject the pig with. He preferred the apple cider-Coca-Cola mix to an earlier version he’d made with orange juice and pineapple juice, as the apple’s sweetness came out better in the meat.

Also the smaller the pig, the more tender—and more expensive. Ask your butcher to split a whole pig (laying it flat will cook it faster). A 47-pound pig cost, at $3 a pound, about $140, which feeds about 20 guests happily.

Don favors the Caja China brand for a roasting box. There are plenty more fancy models out there, including all-metal ones, but his basic model does the job fine every single time.

*Image of pig via Shutterstock.