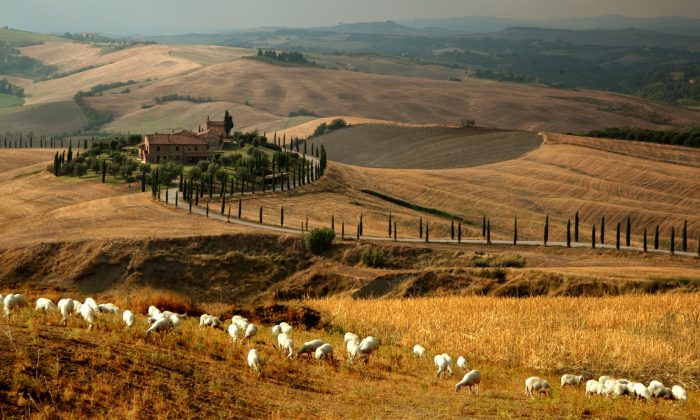 Tuscany has long been sheep country; pecorino is firmly rooted in the history of the region. (Courtesy of the Consortium for Pecorino Toscano PDO)
Destinations

A Pecorino to Savor Under the Tuscan Sun

MANCIANO, Italy—The rolling, sun-drenched hills of Tuscany are covered in pastures. They lie across the land in undulating expanses of lush green in spring and straw yellow in the summer heat, surrounded by vineyards and groves of olive trees with leaves that shine pale, silvery mint in the sunlight.

Pecorino, Italian sheep’s milk cheese rich with butterfat and fragrant with sweet grass and hay, comes in myriad forms; Pecorino Romano, from the regions of Lazio and Sardinia, is perhaps most familiar to Americans—a salty, snowy-white dusting atop pasta or salad.

But here in the Tuscan hills, the mild and milky Pecorino Toscano reigns king.

Awarded protected designation of origin (PDO) status in 1996, Pecorino Toscano has been made in these hills since the time of the ancient Etruscans. Throughout the centuries, it made its way throughout Italy and was celebrated by the likes of Roman scholar Pliny the Elder to Renaissance humanist Bartolomeo Platina, who declared it one of the best cheeses in all the country, right alongside Parmigiano-Reggiano.

Tuscany has long been sheep country—the Etruscans raised the animals for meat, milk, and wool, which were a crucial part of the economy. In the great pastoral tradition of transhumance, nomadic shepherds would herd their great flocks across the countryside, traveling south from the Apennine Mountains to the warmer, coastal Maremma area for the winter, and back to higher ground for the summer.

Back then, meeting a flock of sheep was considered a blessing; Tuscan mothers continue the tradition today by telling their children to clap upon seeing a flock, for good luck.

“The way Pecorino Toscano is produced comes from centuries of tradition,” said Andrea Righini, director of the Consortium for Pecorino Toscano PDO. The consortium, founded in 1985, acts as a “cheese police” of sorts, dedicated to protecting that tradition by ensuring the quality and authenticity of Tuscany’s ancient treasure in today’s markets.

It’s a treasure unique to the region, “different from every other pecorino,” Righini said. Compared to its sharper and saltier Roman cousin, Pecorino Toscano has a milder, more delicate flavor, and though it grows stronger and nuttier with age, it never veers sharp or overpowering.

Fresh Pecorino Toscano, aged for a minimum of 20 days, is semi-soft and smooth with a pleasant spring; the mature, stagionato version, aged at least 120 days, turns firmer and crumblier, but still melts rich and creamy on the tongue.

Tied to the Land

Part of Pecorino Toscano’s uniqueness can be attributed to production specifics: the processing method, temperature, time. The cheese also has a low average salt content of about 1 percent for a young wheel, and 2 percent for an aged one, compared with, say, Parmigiano’s 3 to 4 percent.

But more of it comes down to the land.

As with its wines and olive oils, Tuscany’s cheese is an expression of its unique terroir; food and place are inextricably linked. Pecorino Toscano PDO is made exclusively in Tuscany and a few municipalities in nearby Umbria and Lazio, as per PDO regulations, from the breeding and milking of the sheep to the production and aging of the cheese itself.

As in ancient times, the sheep graze in open pastures on green grasses full of wild herbs and rich with nutrients, giving their milk a particular smell and taste. Those particularities are then transferred to the cheese.

If you were to instead use milk from sheep in other regions to make Pecorino Toscano, even following the proper procedure would result in “a completely different cheese,” Righini said.

In fact, there’s plenty of variation even within the PDO region, due to different climatic conditions in the area’s many micro-regions. (Differences were even more pronounced in centuries past, as each shepherd crafted his own style of pecorino.) And so, despite following the same PDO requirements, each pecorino brings something different to the table.

Tracing Pecorino Toscano from table back to farm, I visit Lorenzo Villani’s sheep farm in Manciano, a town in the southern part of Grosseto province.

The farm’s 400 sheep are milked twice a day. Like most other sheep in Tuscany—there are more than 400,000 in total—they’re raised exclusively to produce milk for Pecorino Toscano.

It’s a family farm, passed down through generations. “For how long?” I ask. “Sempre,” I’m told. “Forever.”

In the barn, I watch as the sheep line up on a wooden platform before a mechanical milking station, bleating and swinging their heads about to ward off the flies, as Villani attaches cylindrical metal suctions to their udders to do the work. They’re released, and a new group bleats its way up the wooden ramp.

The same can be said for the dairies. The consortium’s 17 member dairies range from large, near industrial-scale operations, like the 40-producer cooperative Caseificio Sociale Manciano, which sources milk from over 240 local sheep farmers (including Villani); to smaller, more artisanal-scale businesses.

Industrial equipment drives the production, but human hands and expertise are indispensable, my guide at Caseificio Sociale Manciano says.

We’re standing inside the main room of the factory, permeated with the heady, grassy smell of warm sheep’s milk, donning disposable lab coats, hairnets, and bright blue shoe covers. All around us, workers—she calls them “technicians,” for their sharp, experience-honed understanding of the production process—man giant metal vats of milk and rolling shelves of cheese.

After arriving from the farms, all within 40 miles of the factory, the sheep’s milk is tested for quality, pasteurized, and coagulated with calf or vegetable rennet into what looks like a thick, white pudding. Rotating metal rakes slowly glide through the curd to break it up, until human eyes judge it to be the right consistency: hazelnut-sized lumps for young pecorino, to retain more moisture, and corn-sized ones for pecorino destined to be aged, to encourage draining.

Giant hoses then transfer the mix into plastic molds to drain the whey (which is siphoned away to make fresh ricotta), and workers reach in with delicate scooping motions to bring solid curds up into snowy mounds.

The filled molds are steamed and then left to drain, regularly flipped with expert hands to prevent settling, and briefly brined before being whisked off to ripen in carefully controlled storage rooms.

Finally, the rinds are treated for protection from contamination and dehydration; some may also be brushed with an extra layer of olive oil, ash, or tomato sauce.

Each finished wheel is rigorously inspected. Only high-quality, defect-free selections are granted the PDO label—stamped with ink onto the rinds of young pecorino, and branded hot onto those of aged ones, to be worn like badges of honor.

In Tuscany, both fresh and aged Pecorino Toscano are mainly enjoyed in slices, as a table cheese. They shine brilliantly on their own but also pair well with a variety of honeys, sweet and savory jams and preserves, and nuts like walnuts, whose bitter edge riffs off of the sweetness of the cheese.

Pecorino and pears is a classic combination, a common breakfast for peasants and shepherds; in the spring, Tuscans traditionally herald the season with a pairing of pecorino and fava beans.

Pecorino Toscano’s biggest market is Italy, but the cheese is exported around the world, enjoying growing popularity throughout Europe and the United States. It’s readily available at cheese counters across the country, or online.

But for a true understanding of the product and its roots, nothing beats tasting it in the land where it was made—and has been, for centuries.

For that, I head to Maremma Regional Park. An evening horse-drawn carriage ride (available to book through the park’s website) takes me through a wild and unspoiled expanse of the ancient region, and ends with a picnic dinner on a pristine beach along the coast.

The spread is a celebration of my surroundings: intensely savory slices of Prosciutto di Toscano PDO; panzanella with cucumbers and tomatoes from my carriage driver’s garden and homemade cold cuts from his kitchen; olive oil and wine made from olives and grapes grown in the park; and Tuscany’s signature unsalted bread baked in a nearby town.

And, of course, there’s Pecorino Toscano—the proud centerpiece of the table, creamy white and pale yellow slices dewy with drops of butterfat.

I savor the simple feast as the sun sets behind me, streaking the sky with electric pink and orange, over the lands that provided such a bounty.