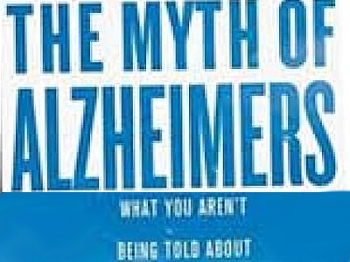 Book Review: ‘The Myth of Alzheimer’s’

Dr. Peter Whitehouse doesn't claim to have a magic bullet cure for what he calls brain aging and others have diagnosed as Alzheimer's, but he does offer another approach. He goes back to its discovery, reviews the effectiveness of drugs, what's going on in genetic research and then discusses some natural alternatives based on common sense and human relationships.

Named for Dr. Alois Alzheimer, Alzheimer's disease was actually coined by Emil Kraepelin who based recognition of the condition on one strange case treated by Alzheimer, that of “Auguste D.” Before he was lauded for his contribution to science and medicine, Dr. Alzheimer actually questioned his conclusions as “there is, then, no tenable reason to consider these cases as caused by a specific disease process. They are senile psychoses, atypical forms of senile dementia.” In other words, he doubted that his treatment actually resulted in a “new” disease.

Whitehouse lambastes media reports that regularly post “breakthroughs” and cures. “We must learn to read media reports carefully so that we are not seduced by false hope,” he urges his readers.

The author touches on the many pharmaceutical options including products of stem cell research, NGF, or Nerve growth factor fibroblasts, and Alzhemed which is taken orally for mild AD cases. He points a finger at the pharmaceutical industry that uses its seemingly unending well of advertising dollars to push products: “Equally troubling is that the lofty rhetoric used by drug companies belies a profound failure of actual innovation toward new treatments.”

Is forgetfulness really a “disease”? Whitehouse offers a model that includes the human factor in treating memory loss. There are warning signs that tell a doctor the patient is experiencing more than normal memory loss: difficulty performing familiar tasks, problems with language, disorientation, not able to think abstractly, and loss of initiative, signal professional treatment.

With the baby boom generation hitting those years that either require caring for an aging parent or suffer symptoms themselves, Whitehouse says that age offers some benefits compared to youth. A senior can place facts in the proper context, have experience to make them “wise”, they have better supervisory skills, they can “read” people more accurately than a younger person, they are more tolerant, are a treasure trove of history from their past and they are better able to engage in strategic thinking, all of which our world today can certainly use.

This is a book that deserves the attention of medical providers, baby boomers, and young people alike.

The Myth of Alzheimers—What you aren't being told about today's most dreaded diagnosis, by Peter J.Whitehouse, M.D., Ph.D. with Daniel George, M.Sc. (2008) is published by St. Martin's Press.