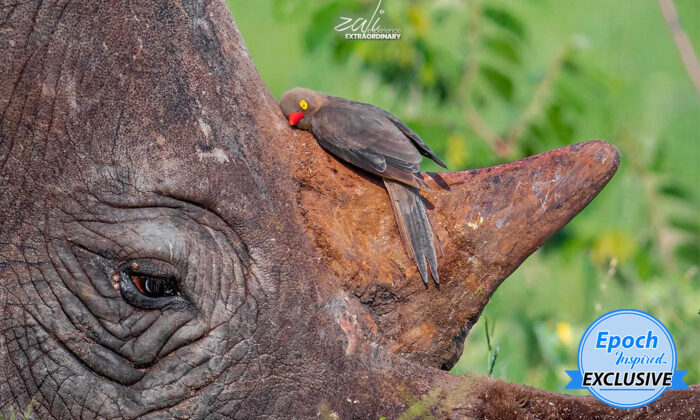 On spotting a small bird in a unique embrace with a rhino’s horn, a South African photographic guide snapped a shot of the precious moment at the perfect time. The heartwarming photo has gone viral and brought joy to many people.

Zaheer Ali, who originally hails from Johannesburg but now lives in Polokwane, is the founder of Zali Safari, a brand built by him and his wife with the intent to showcase Africa’s wild and beautiful places to the world.

Ali was driving an afternoon tour toward the site of a lion sighting at Mala Mala Game Reserve in the Greater Kruger area in December 2020 when his group came across a lone rhino.

He had stopped the vehicle at a safe distance to tell the family of four on his tour some facts about rhinos, when an oxpecker caught his eye.

“I watched as this tiny bird sharpened its beak on the horn of the rhino and it was something I had never seen before,” Ali, 32, explained on the Zali Safari blog. “As photographers, we are always looking for something different to capture, and this was definitely it!”

As the little bird stopped to rest on the rhino’s horn, Ali picked up his camera and captured his best photo. He shared it on Instagram, captioned, “Sometimes all you need is a hug,” and love poured in from netizens in the thousands.

Speaking to The Epoch Times, Ali reflected, “Just a simple, everyday interaction between two animals has brought so much joy to so many, and we love that we can do that through this image!

“I did not expect this photo to be showcased the way it has,” he continued, “but in a time where we are longing for that human touch and human interaction, this photo has reminded so many of what life was before the pandemic.”

Ali, who has always had an interest in photography, shot cityscapes until his fascination with wildlife took over. This portrait with the rhino marks a turning point in the photographer’s journey. The photo went viral, and after entering a Kruger Magazine photography competition, Ali won its “Amateur Photo” and “Most Popular Photo” awards for the extraordinary shot.

“I would really like to encourage others to get in touch with nature and start enjoying what’s out there,” said Ali, who’s flattered by the overwhelming response the image has received. “It is so important for us to be in tune with our natural selves, so that we can feel human once again.”