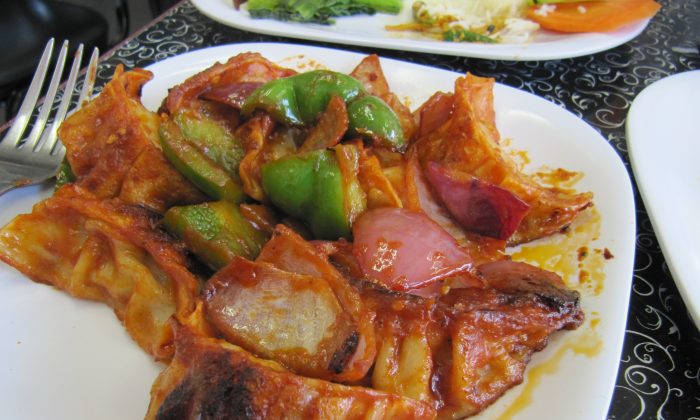 A Himalayan Dumpling Tour in Queens

NEW YORK—Momos, or Himalayan dumplings, are quietly becoming one the most popular dishes in Queens. In Jackson Heights’ Little India neighborhood, 19 places now serve them, says Jeff Orlick, known for his food tours exploring the culinary treasures brought by immigrants to the most diverse county in the United States: Queens.

“Just about every culture has some form of a dumpling, but only the Himalayan ones actually call them a ‘momo.’ The momos are such a simple food, maybe the ultimate comfort food. Everyone’s mother has a different way she does it, a different feel, and each one is the best,” says Orlick. “The best ones are the ones that remind you of home.”

Momos provide an easy and fun gateway to exploring the food of the Himalayan cultures, providing “an oasis of familiarity in an otherwise alien menu …. Now if we had a butter tea tour, that might not go over as well,” he said.

Last year Orlick organized a momo crawl limited to 30 people. This year, 100–125 attendees are expected. Orlick was inspired to organize the tour to celebrate the influx of Himalayans to the area and support these new entrepreneurs “who have the courage not to open up a Subway.”

“When you go to a Nepalese or Tibetan restaurant here, at least half the tables will have momos on them. A dumpling is just one of those perfect foods—everybody loves to eat them because they are fun to pick up and eat, they hold the moisture in, and the tastes are simple yet possibly complex. And here in Jackson Heights, we are so lucky that so many restaurants here take pride in them and make them by hand, even the dough is made in-house at many of the locations like Tibetan Mobile and Phayul,” he said.

For Orlick, these food tours are as much about the food as bringing people together and making friends. “When I bring four or so non-Tibetans into an entirely Tibetan restaurant, I start talking about how the people are dispersed. There will be five or six Tibetans eating by us, perhaps suspicious that we are health inspectors… but then I take out my world map and ask everyone where they are from. It opens up the room and everyone talks about the struggles back home, and about coming to Queens.”

“In this neighborhood, everyone is so proud of where they are from and eager to tell their story—the nicest people you will meet.”

When: Sunday, May 19, 1:30 p.m.
Where: Meet at Jackson Heights Plaza (37th Rd between 74th Street and Broadway, Jackson Heights, Queens).
In exchange of two bills of any denomination of their choosing, attendees will be given a map that will be stamped at each location and divided into teams of eight people, so the costs of the momos will be split among the group. At the end of the crawl, the best momo maker will be awarded a giant momo trophy.