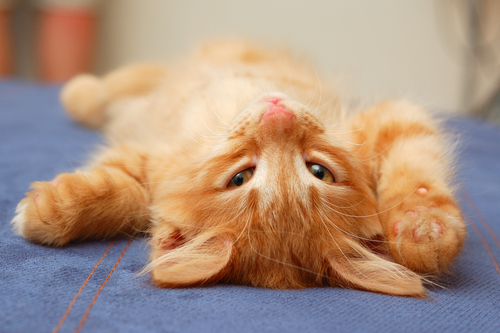 A cat will often show its belly in greeting a trusted person, but it is not an invitation to rub its belly. (Shutterstock*)
People

A Guide to Cat Body Language

Cats communicate not only in purrs and growls but in many complex motions, using ears, eyes, tails, and body to express themselves. These expressions are often misunderstood. Here’s a guide to help you better understanding your cat.

Up: Happy and approachable
Down: Scared or threatened
Wagging rapidly: Agitated
Wagging slowly: Alert, assessing the situation
Stiff, up: Trying to appear larger, aggressive
Straight up and quivering: Excited. If your tom cat has not been neutered this gesture can also mean he is ready to spray.

Forward: Content, playful
Backward: Irritated
Up: Alert
Flat against head: Defensive, angry, stressed. It’s good to give the cat the opportunity to hide or get up high.
Swiveling: Attentive, trying to pick up sounds

A playful cat with its ears forward. (Shutterstock)

Back arched, fur flat: Happy to be petted, welcoming

Belly up: Exposing its belly is a cat’s sign of trust, but it’s better to rub the head than the belly, according to Cats Protection. Rubbing the belly can be like a violation of the trust the cat is expressing. Cats will often nip at or push a human’s arm away when its belly is rubbed.

Rubbing: Cats are marking objects, or their owners, with their scent.

*Image of cat on its back via Shutterstock