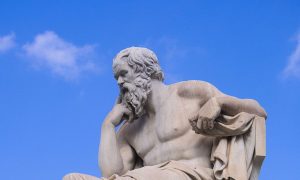 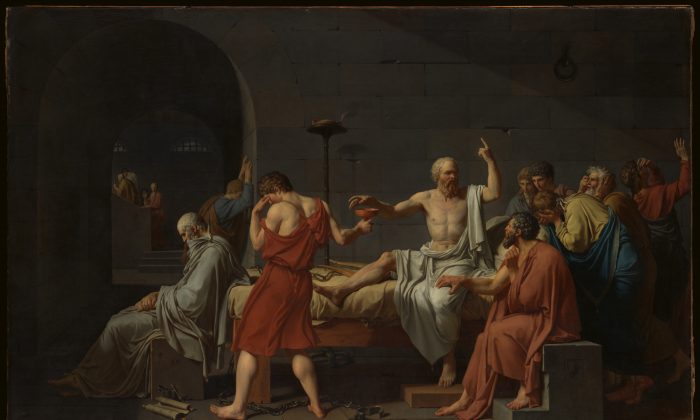 A Good Man Has Nothing to Fear, Even When Faced With Death

It’s 399 B.C. Having been judged and condemned to death, Socrates, the ancient Greek philosopher, reflects on his predicament. Rather than bemoan his fate, he relishes an opportunity for discourse, continuing to uphold his values as he had throughout his life.

While waiting to be taken to his death, rather than make a last-ditch appeal, Socrates makes a speech. Socrates’s student Plato recorded this last oration in his “Apology,” as cited in “The World’s Famous Orations, Volume 1: Greece.”

Socrates speaks first to his oppressors: As an old man, he knows that death is naturally upon him. All his enemies need do is wait. Yet, here he faces an early death.

But he remains resolute, refusing to lower his standards or to speak against his values to save his life.

To escape death is easy, he says, but “it is much more difficult to avoid depravity, for it runs swifter than death.” His accusers have been overcome with this “wickedness,” having accused him of impiety and corrupting the youth of Athens. The accusation of corrupting the youth comes from Socrates’s chasing of true knowledge by questioning rather than accepting the status quo. The consequence of making such accusations is to be “condemned by truth, as guilty of iniquity and injustice.”

Socrates predicts that a far worse punishment than what he faces will fall on those who condemn him, and that putting people to death will not allow any accusers to avoid being held accountable for their unrighteousness.  It is best for “a man to take heed to himself” than to look at how others behave.

Then Socrates speaks to his supporters. He says that he has been guided by God throughout his life, and that when evil appears, God often warns him of it. While waiting to be put to death, though, he has heard no such warning. Unwavering in his faith, Socrates believes that because he was not forewarned of any evil, the death sentence must be a blessing.

Socrates surmises that death could be two things: “annihilation” or the “passage of the soul” to another place. He compares annihilation to the best possible night’s sleep, absent of any dreams or sensations. If death is like this, how can it not be a gain? he says.

If death is a transition from one place to another, then all of the dead could be in Hades. In Hades, he believes he would be judged by the “true judges,” as is the fate of all men at the end of their days.

He lists all the honorable men he’d love to question, such as Orpheus, Hesiod, and Homer. What a wonderful opportunity: It must be a place of “inconceivable happiness,” he says.

He then asks his oppressors to meditate on this: “To a good man nothing is evil, neither while living nor when dead, nor are his concerns neglected by the gods. And what has befallen me is not the effect of chance,” he says. Therefore, a good man need have no fears when he puts his faith in the divine.

Socrates, in his final words, harbors compassion, not resentment, for those who condemned him to death.

His oppressors could help him and his family by chastising his sons if they ever put “riches or anything else before virtue, and, if they think themselves to be something when they are nothing.” For this he hopes his oppressors would reproach his sons as he has done to his accusers, “for not attending to what they ought.” This would be a righteous act.

At the end of this earthly life, Socrates believed that each person would be judged by how they had lived and that the sacred scales of justice will prevail.